At age 27, Josef Newgarden is sitting atop the IndyCar racing world. Last year he amassed four race wins, one pole position, and ten top-five finishes on his way to becoming the IndyCar Series Championship.

I spoke to him before his charity ping-pong event at Smash Social in downtown Indianapolis. The event raised funds for the Serious Fun Children’s Network. Yes, he’s also a serious ping-pong player whose high school rival was NFL wide receiver Golden Tate.

We didn’t talk about ping-pong, but we covered a lot of interesting ground.

Richard McCoy: What was your first experience with the Indy 500? Was it on the radio, TV, or in person?

Josef Newgarden: That would have been watching the race on TV when I was a kid. I watched everything and was exposed to all different types of racing, but I was always drawn to open wheel cars like IndyCar and the Indianapolis 500. To me, they were the coolest cars out there. They look like jet fighters.

They didn’t look like something you can buy and drive on the road. That kind of exoticness was really fascinating to me and the speeds of it: the sounds. So yeah, the TV was my first exposure, and then I got into go-karting when I was about 13.

RM: And you rose up the ranks quickly to IndyCar.

JN: Yeah, it was quick, but I was always into sports. I started playing sports when I was four: I played baseball and basketball, very typical suburban sports in Hendersonville, Tennessee.

RM: Were your parents into racing?

JN: My dad is really into it. He’s a big racing fan, so is my grandfather. My father had been in a race or two in Nashville but nothing super serious. He never had the funding or the sponsors to do it. But he was always a big racing guy. He loves cars.

RM: Would you watch the Indy 500 with your dad?

JN: Yeah, oh, yeah. I would always watch racing with my dad. We would go to some races, but I never got the opportunity until I was 13 because they didn’t want me to race. My mom didn’t. My dad didn’t. It was expensive.

RM: Did they know anybody that raced?

JN: Not, really. We didn’t have any real racing connections, nothing substantial, and it cost a lot of money. So that’s a component of it. If you even just want to go go-karting, you could spend $10,000 to $15,000 a year.

RM: To fast forward to the present: you had an amazing run last year and now you’re here in Indy just days before the race. Are you staying out at the track?

JN: Yeah. I always stay at the track for part of the month. I’ve kinda gone back and forth. Some of the people that live here in Indy, they just stay at home.

But even a lot of guys that do live here, they’ll get a bus and stay at the track just because it’s easy. You’re there every day. You want somewhere to go when you’re not driving. It nice to not have to get up and try and get to the track. You’re already there, so it’s easy to stay there.

RM: What are some of the things you do when the track is closed to the public?

JN: I like to walk around when it’s dusk. I’ll show you a photo I took two nights ago. The picture doesn’t do the night justice because the pagoda is a big building and it’s lit up at night. I like that sort of stuff where it’s really calm, no one’s around. You can just hang out on the racetrack. It was a very pretty sight a few nights ago. 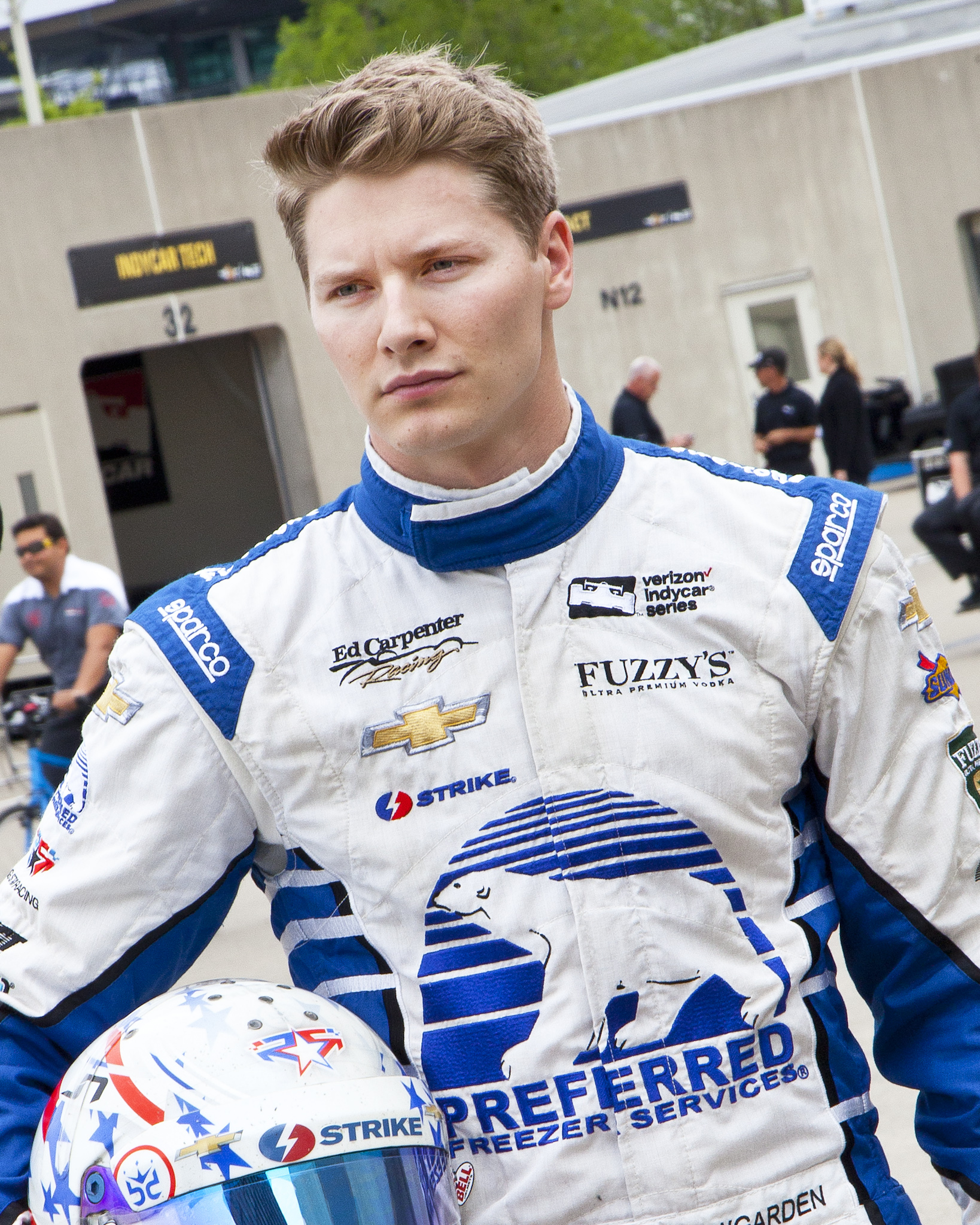 RM: Can you go wherever you want?

JN: Pretty much. They know who we are. They know we’re in the track. It’s our home for the month. It’s like our little neighborhood; it’s like our backyard, so it’s a weird sort of feeling to create.

RM: Are there other races where you spend so much time?

JN: No. Everywhere we go, it’s like three or four days. It normally starts Thursday, ends Sunday. Some are a little shorter depending on the schedules. Indy’s the only place like that.

RM: Are there any drivers that have the place where you go get coffee in the morning or the place you get the beer at night?

JN: You can go visit bus neighbors. The other night I stopped to see Robert Wickens and he had Monopoly going, but I had to leave early in the morning, so I didn’t play. Sometimes you can go watch a movie or go play video games with people.

There are people that have certain amenities that you can kind of share. So that happens.

RM: What are the things that you look forward to visiting in Indy every year?

JN: I’ve got a bunch of food spots I’ve got to hit here. Like Tegry Bistro up on 86 street. For me, it’s the best sushi in Indianapolis. Indiana is not really the place you go to get sushi, but, you know. When I live here I had to have a place to go to for sushi. And that was always my favorite spot. We know the owners there, Nara is normally there, she’s so nice. She takes great care of us. So I’ve gotta hit that up, and then just being on Mass Ave is quite nice. You can hit up Bakersfield or other spots.

RM: Do folks know who you are when you’re on Mass Ave?

JN: It’s hit or miss in Indy. But I get recognized here more than anywhere else, because the 500 is so much more ingrained in the culture. People know the race, it’s a traditional event here, so you’ll get more people that know what’s going on in this city than you will anywhere else.

RM: This will be your seventh Indy 500.  Is there any part of the pre-race ceremonies when the magnitude of it all really hits you?

JN: Walking into Gasoline Alley on race morning. The place is filling up way more than it has all month, and then you start realizing it’s gonna happen. It’s really just the mass amount of people that you see.

RM: You’re in your second year of racing for one of the legendary organizations, Team Penske. What’s that like?

JN: This is the 52nd season for Penske racing, so it’s huge. It’s like playing for the New York Yankees. That’s the way I put it. It’s a dynasty, and they have been so successful; the winningest team at the Indianapolis 500. It’s an iconic group to drive for, man.

RM: Can you spot an IndyCar fan in a crowd?

JN: IndyCar fans come in all forms. Some are super casual and I would never guess they’re IndyCar fans. People that I’ve shaken their hand, they’re like “dude, I’m a huge IndyCar fan, I love watching the 500.” You’d never know, you’d have no idea. And then you have some that you’re like, that looks kind of like an IndyCar fan, and they are. It just depends.

It’s such a cultural thing for this city. Here you don’t have to be a big race fan, but you can be an Indy 500 fan.

There are so many stories from people that say, “ I’ve had these tickets passed down for generations. My family has been going for 50 years.” So it’s not really like your traditional race.

JN: Well, we all kind of wear the same stuff. If you look at the Penske guys, we’re always in black pants and white shirts; crisp. It’s a very buttoned-up look. A little bit corporate, but very professional. That’s always been our image.

Andretti is a little bit more edgy. They always wear something Italian because of their Italian heritage. So they’ve got that style going on. You’ll get some style differences, but nothing dramatic. For the most part, everyone is similar.

The liveries are what change. The designs of the cars change and the patterns used to decorate the cars; that’s where things are unique today.

JN: Yeah! It’s so cool. The whole Helio deal, the old school Pennzoil, all that stuff is badass.

RM: What do you do when the race is over?

RM: Is there beer in there?

JN: I don’t drink, really, so just bad food. I just go somewhere to get bad food, doesn’t matter where.

RM: You’re not talking Taco Bell bad, are you?

JN: No. Some drivers like that, but I’m more of a burger guy. If we had In-n-Out this way, I’d be all over that, but we don’t. So I try and find a good burger joint.

RM: So it’s just something to eat after the race.

JN: Normally we have a driver afterparty, so I’ll probably do that this year. It depends on the race, you know?

If I win the race, I would want to camp out on the Yard of Bricks. I would want to be right there on the start and finish line, I want to have like a little campfire right out there in our backyard.

Written By
Richard McCoy
More from Richard McCoy
It’s a rare moment when a designer gets the opportunity to work...
Read More