Lori Miles: Baptized In Sugar, opening October 4 at Tube Factory Artspace, will be the artist’s first solo show in Indianapolis in ten years. Art journalist and writer Phillip Barcio chatted with Miles about her new show.

Lori Miles’ work is simple, but it’s not simplistic. You could give it heady labels, like conceptual (it springs fundamentally from the world of ideas) or interdisciplinary (it incorporates sculpture, photography, painting, installation and whatever other method Miles feels like deploying). But such academic aphorisms seem scant.

It’s more like Miles is broadcasting directly from the subconscious: that part that can’t stop noticing what’s not supposed to be noticed in polite society—the accidents, the conspiracies, the messes, the fragile hopes, the embarrassing weaknesses, the fears and random dreams. Instead of turning away from such curiosities, she manifests their psychic residue as art, or something like it.

Miles’ past bodies of work include I stock famous artists—a collection of stock photos that unwittingly copy the work of famous artists, pulled from a digital database; the Arcades Project—sculptures of objects (like a bird house atop a stripper pole) that have lost their original function and thus moved into the realm of “pure decoration;” and Martha Stewart Disaster Series—famous disaster photos (such as the Hindenburg explosion and Princess Diana’s car crash) transformed into paint by number pictures, stripped of emotional content via Martha Stewart craft paint.

I reached out to Miles to find out what she has planned for her Tube Factory exhibition, which opens October 4th, tentatively titled Baptized In Sugar.

Phillip Barcio: What are you showing at the Tube?

Lori Miles: It’ll be a bunch of work I made while on sabbatical. I’m a professor at DePauw University. It’s a small school, and we still have these long sabbaticals. The space away from the teaching part of my job gave me a year in a vacuum. A couple of pieces actually have a vacuum in them. A year in a vacuum working with a vacuum!

PB: A year’s a long time to be with your thoughts. What were you thinking about?

LM: A lot had to do with my own biography, or narrative of my own history. I have two kids and my daughter is in her first year of college. It hit me that when your child leaves for college, it’s too late. I spent so much time thinking I had plenty of time to get it right, but now I don’t. I wondered, did my family feel the same way? I think about how my memory of my experience with my family is so distinct from my sisters’ and anyone else’s in the family. I have no idea if my memories are fair or truthful or accurate. When I ask them about our childhood, they say they do not remember the same things. So what’s the point of truth? The truth is just something waiting to be proved wrong. The truth should always be accompanied by an asterisk. 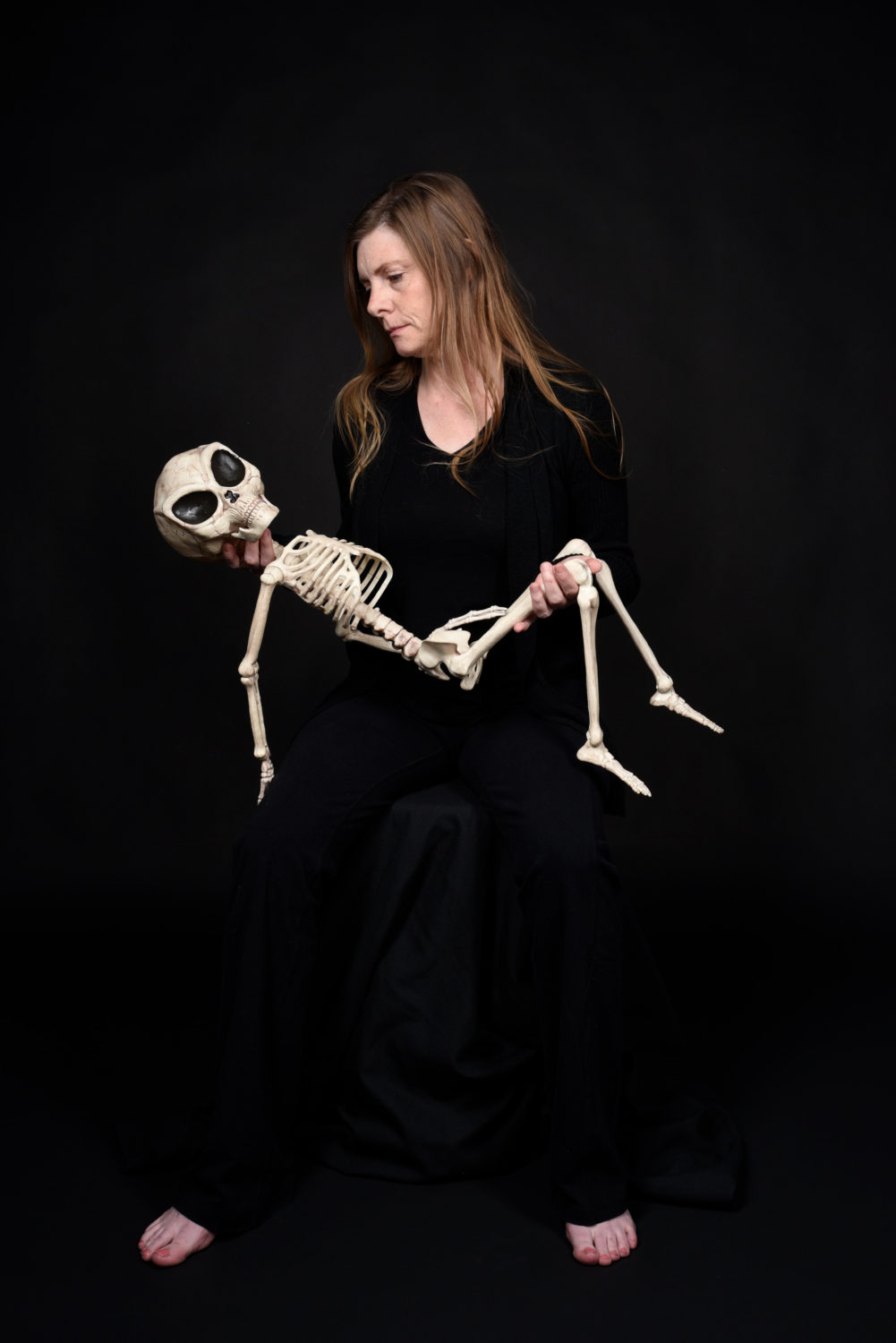 PB: If everyone’s memories are fake, it doesn’t matter.

LM: I’ve always had an attraction to things that are fake. A ceramic pig is never going to convince someone that it’s something other than a copy. So that becomes a different kind of honesty. The fakes at least know what they are. I think of myself as a champion of fakes and lies. I had a struggle with that when Trump got elected. He really ruined that word fake.

PB: I have four sisters. I’m the baby. None of us remembers anything the same.

LM: When I got married for the second time, my husband said, “Oh I’d love to see some pictures of Lori growing up!” My mother sent this Ziplock bag of 17 photographs to show him. Six of the photographs were my sisters! She didn’t even get the right kid. She said, “Oh, it’s kind of like you. You looked the same at that age.” Like we were interchangeable artifacts.

PB: (Laughing) Sorry. But you turned the pain into a new show.

LM: How did it come to be that I thought I could turn anything that I wanted to into art? When I was growing up, nothing was precious. Not my mom’s cooking utensils, or food. Even though we were poor, we could just go and use stuff to make an invention. We could use the good scissors, or the good camera. We didn’t have a sense that things were precious other than us.

PB: That explains your anarchic method.

LM: I didn’t get raised in a family where we talked about art. I didn’t know you could be an artist until I already was one. I came to art in college on accident. I didn’t know there were any rules. I didn’t have any balance to weigh me down. I’m kind of anti-craft. I worry about an artist who has too much reliance on showing how good they are at something. If the work is well made, that doesn’t make it good or worth something. It’s not that my work is poorly crafted, it’s that its uncrafted. I think my work is at its best if you think it’s no good at all.

PB: Do you mean it’s better if people underestimate it?

LM: Yeah! That’s exactly what I mean. There’s nothing funnier than to be underestimated. I’m 46, white, average looking. There’s a lot of pedestrianism that allows me to chameleon my identity. In any scenario I’m perceived as unintimidating, a non-factor. I like my work to be perceived the same way.

PB: Do you find viewers bring expectations or pretentions to the work?

LM: I like that the work allows people to be the kind of viewer they want to be. I like to think the work doesn’t judge the viewer. They don’t have to know something ahead of time. But sometimes I wonder if there’s too much surface or not enough depth.

PB: If people like it, what does it matter?

LM: It’s not about liking it or not liking it, but that they can approach it. It’s democratic. Maybe what I have always resented about art is it felt out of touch for me. Sometimes I think about the whole purpose of art—who doesn’t? I keep thinking it’s the most useless thing people do, which means it’s the most important thing we do, because it’s not driven by some biological imperative. I think it makes us the most human. The world would go on without art. It would be a lesser thing, but we could find beauty and commentary other places. It’s like a ceramic pig. Who needs it? No one. But who doesn’t want it? Come on. 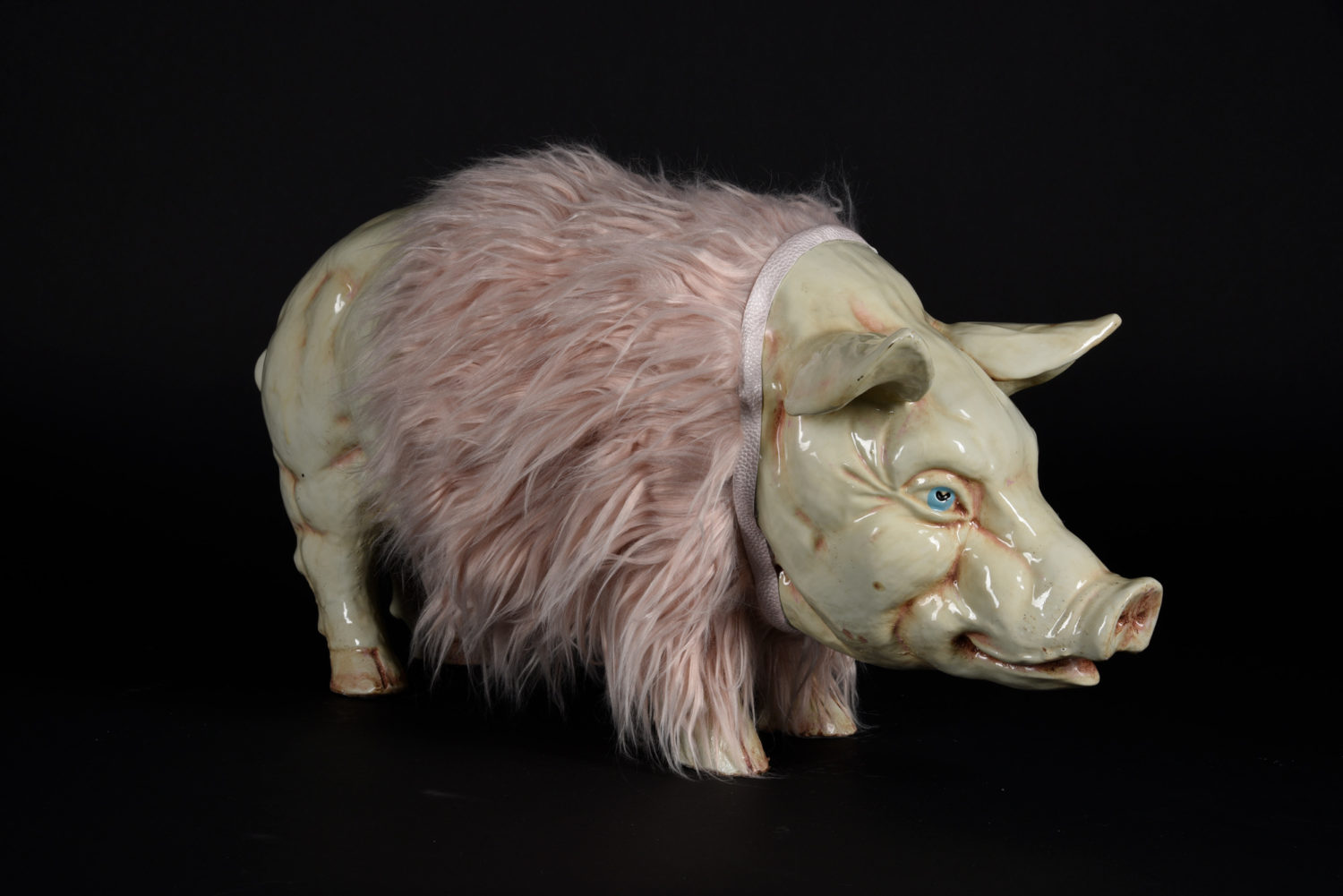 Lori Miles: Baptized In Sugar will be on view at Tube Factory Artspace in Indianapolis from October 4 — 19, 2019. For more information, visit https://www.bigcar.org/event/lori-milesbaptized-in-sugar/.

Written By
Staff
More from Staff
by Helen Wells How many times have you started a conversation with...
Read More