Nicolas Ghesquière really put it out there this season with a runway set in the Cour Marly of the Louvre. There’ve been other runways at the Louvre, mind you. Raf Simons loved converting space there when he was at Dior. No one has shown in the Cour Marly before, though, and if one is familiar with the space one can understand why: the courtyard is massive.

The facility was originally designed to house the incredible sculptures that were once part of the garden at Château de Marly, a relatively “small” estate owned by King Louis XIV. The house there was burned during the Revolution, and along with it many paintings. But the painter David convinced the revolutionaries to spare the sculptures, particularly two tremendous pieces known at the Marly Horses. The horses were originally re-positioned at the base of the Champs-Elysées at what is now known as Place de la Concorde. The horses were moved to join the rest of the collection at the Louvre in 1984 for preservation and maintenance. They hold an unmistakably dominant place in the collection.

I’m not sure I can relate just how incredibly large this facility is. The image below comes about as close as any I could find in relating the size of this “room.” Located in the Richelieu wing of the museum, one wouldn’t have to be a passionate art major to spend the day here. While the Château de Marly statues are the dominant feature, there are several others around the room as well, each given the sufficient amount of space necessary to fully appreciate the delicate nature of these marble carvings. Housed under a great glass ceiling, the room is bathed in natural light and, quite conveniently, the clouds that have dropped a deluge of water on Paris the past three days finally parted and filled the room with sunlight as just guests were arriving for this evening’s presentation.

For the purposes of our conversation here, what one needs to notice are the number of staircases in the room. Long, marble staircases, some of which are wide enough to not have hand rails. Now, imagine that the room is dark. The lights strobe with the rhythm of a beautiful Asian choral piece being performed at significant volume levels. You are a model wearing square-toed leather boots with about a three-inch block heel. And you have to walk down those stairs. ALL of those stairs. A little sympathy is totally appropriate.

I’m not sure Ghesquière fully realized just what he was asking of his models until he took his finale walk at the end of the show. The expression on his face was part fear and part exhaustion. This was a lot of walking as guests were positioned alongside and in between every sculpture in the room.

The clothes themselves are almost completely wearable no matter where one lives. Okay, there are some sheer-paneled skirts toward the end that might draw a few uncomfortable looks here in the Midwest, but as long as one doesn’t mind the stares I didn’t see anything that would be illegal. Instead, what we have are a collection of ensembles that could easily replace your entire winter wardrobe. Not that you can actually afford to replace your winter wardrobe, but you’ll want to.

There is a lot of leather in this collection and Nicholas uses it in multiple ways. I’m going to mention two, for now, but know that there are several others. The first one to catch my eye was this worn leather studded jacket. The collarless look provides plenty of room to show off what might be beneath, such as one of the high-necked sweaters we’ve seen all over the place. There’s a touch of badassery to the piece and it doesn’t require the rest of one’s ensemble to be leather as well. In fact, those blue linen trouses look quite nice with it. 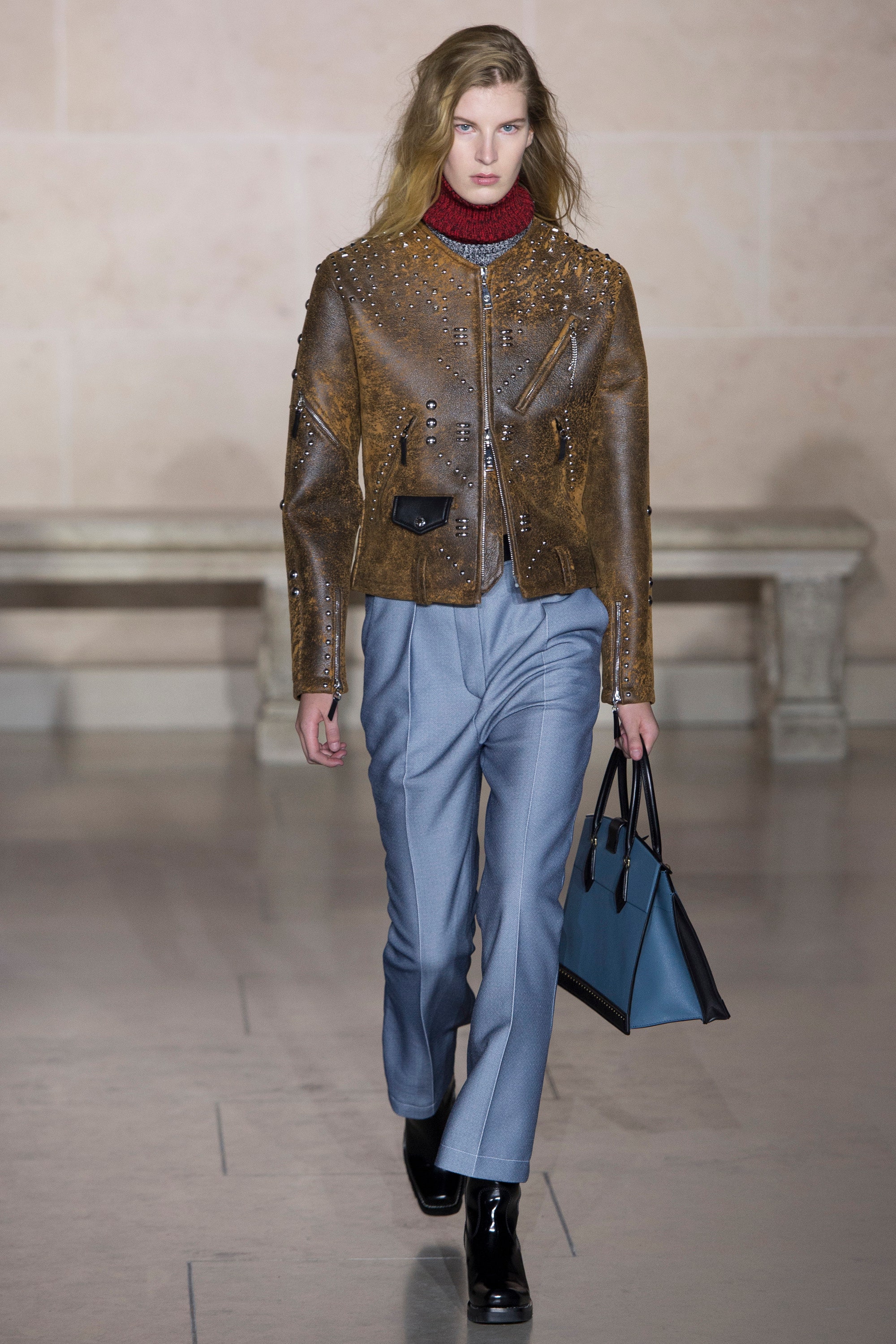 The second look comes considerably later in the collection and is as much as styling decision as anything. Would one have to wear the jacket tucked into the tweed skirt? Of course not. However, this is a styling optoin we’ve seen on several runways and we’ve seen it on several runways because it has shown up so many times in street style photos. What’s important here is that the jacket isn’t too bulky to be tucked. There are no awkward bumps under the skirt or at the waist. If one is going to engage the look, this could be the ensemble with which to do it. 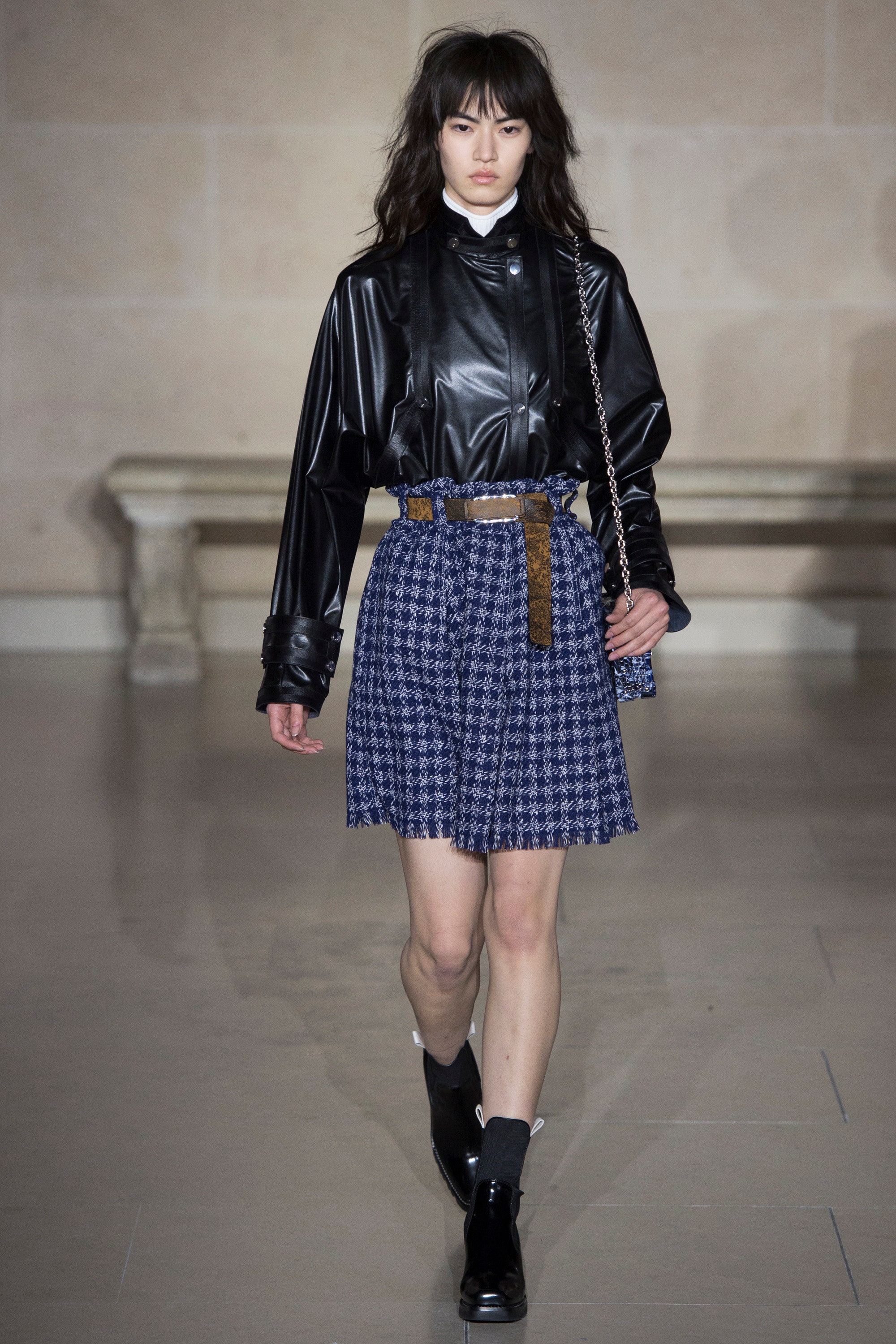 Sweaters loom large over this collection, all with high necks per the seasonal trend. They’re all quite thick and multicolored in reasonable patterns that look good with anything one might pair them with. What you’ll want to notice in the picture below, however, is the chains draped across the jeans. This is not just a one-time look. We see the chains draped several different places through this collection, including over the shoulder and across the chest. This could be another important style item for this fall. 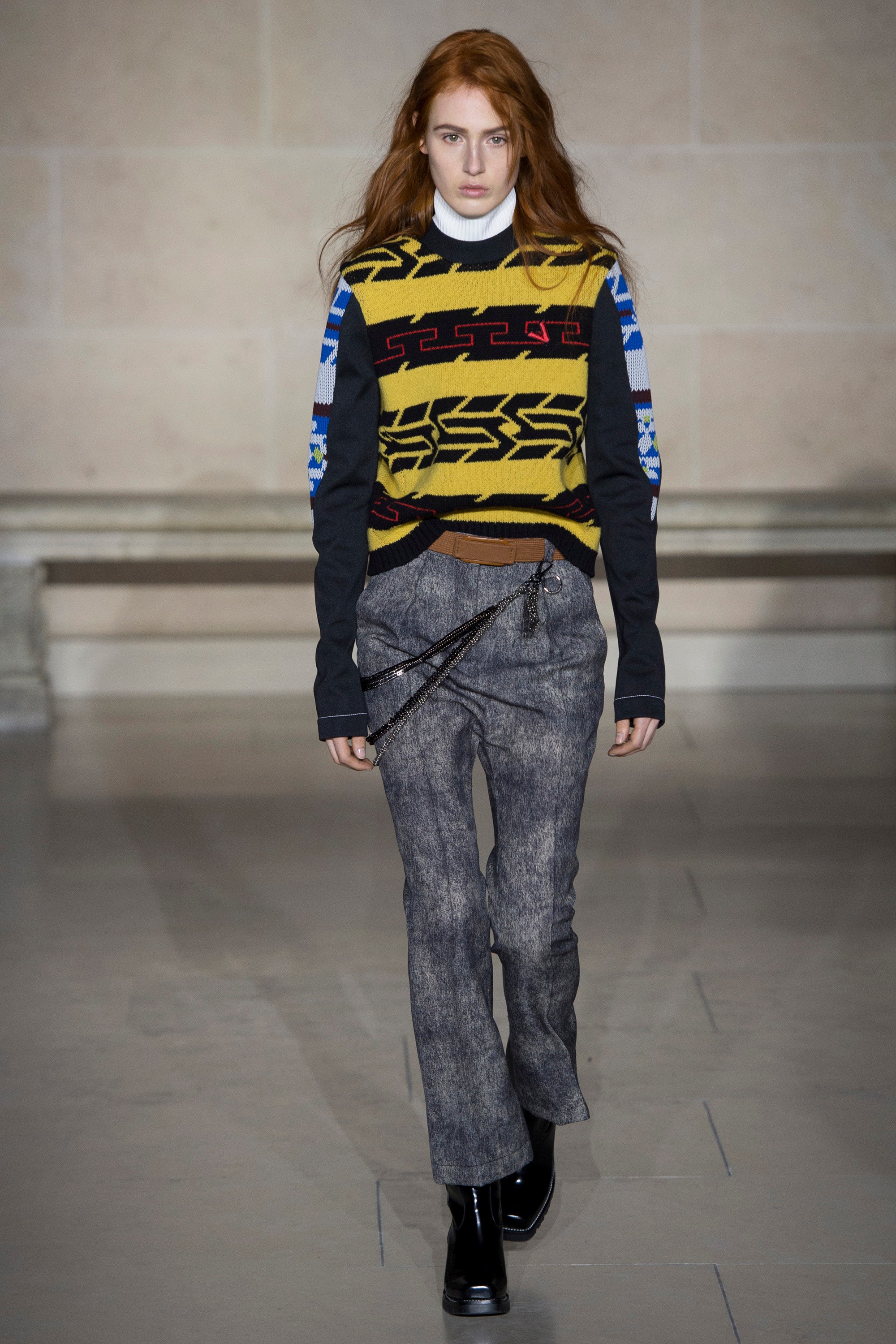 The hottest item on the runway may be this one-shouldered tweed dress. My understanding is that pre-orders for this dress are significantly higher than normal. This could be just the right mix of warm/cool for anyone in those climates that can never seem to decide which season it’s going to be on any given day, ie. Indiana. The tweed is heavy enough to provide some warmth, but being one-shouldered one isn’t as likely to feel suffocated as with a more traditional tweed suit. This look was getting a lot of social media buzz immediately after the show, so expect it to be one of the first items to pop up at stores this fall. 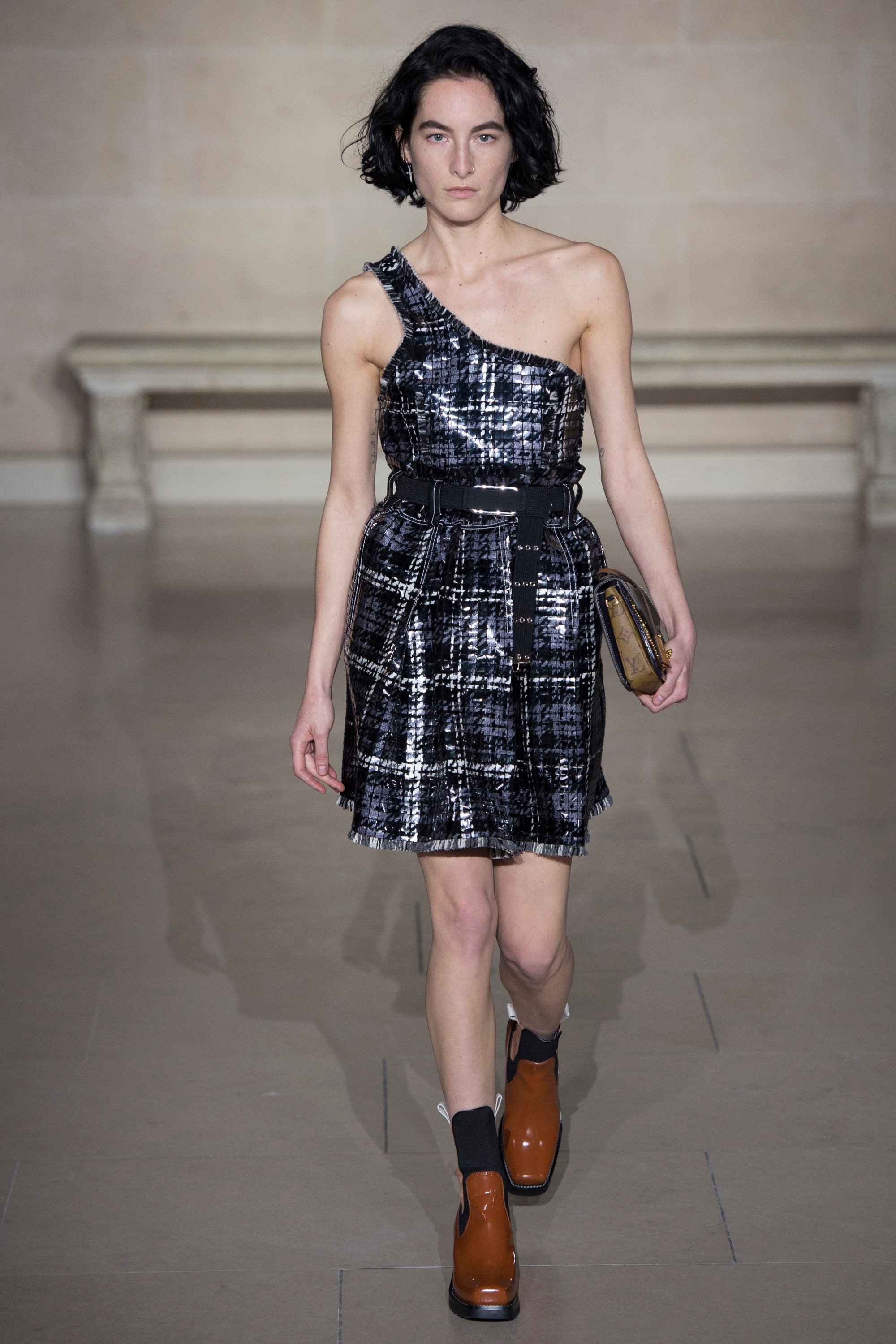 Rounding things out toward the end of the collection were light and lovely printed silk dresses over which were thrown asymmetrical fur capes. The print dresses would be enough on their own, but could be confused with spring wear. They are light and delicate as silk and lace tend to be. The abbreviated capes are just enough to keep one from getting hypothermia between the curb and the club, assuming you’re using the valet parking. Be sure you use the valet parking. 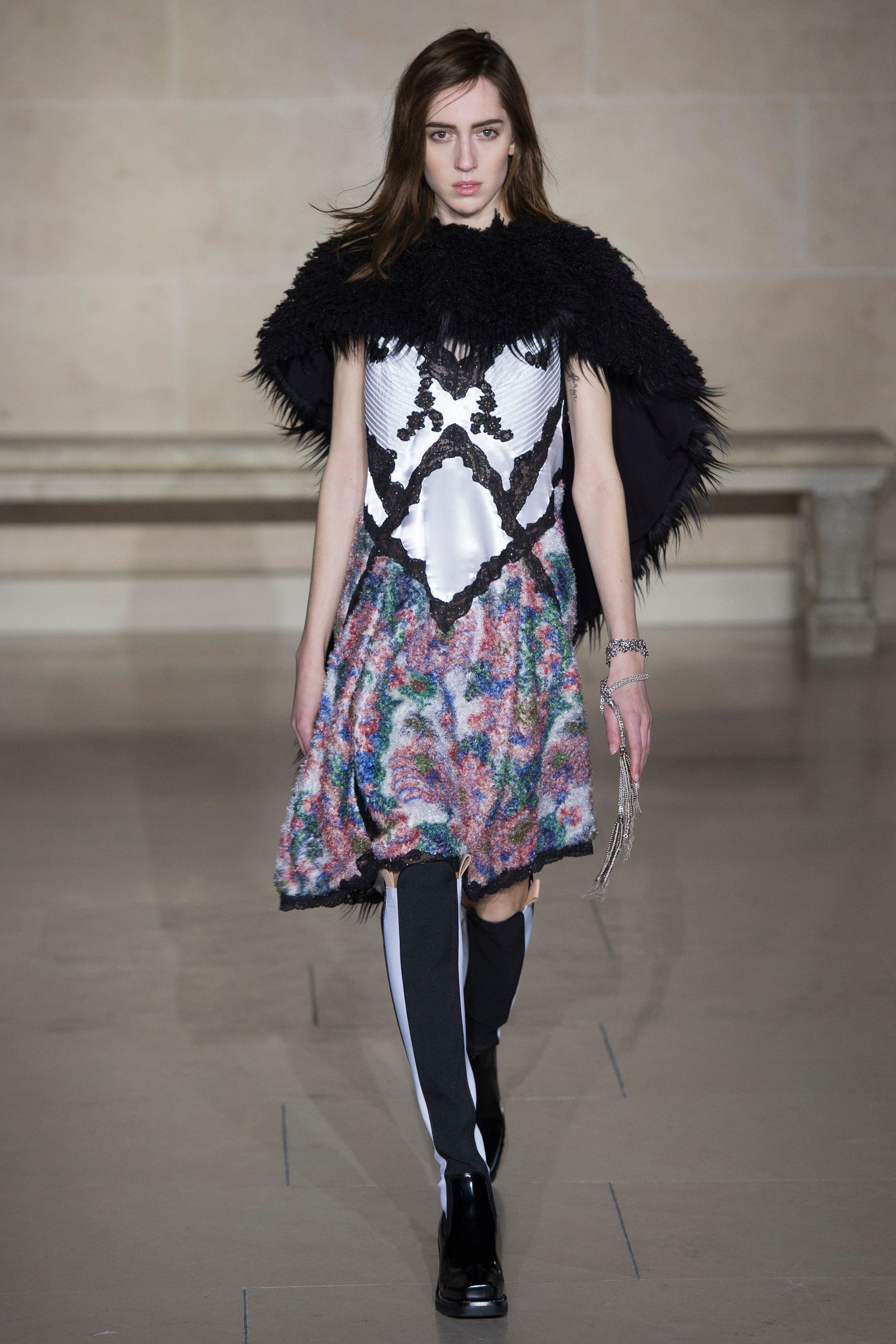 With a very long walk back of the stairs of the Louvre, we end another fashion season. This was a good, kind, reasonable, and artistic place to end. No political statement being made. Nothing outlandish or offensive on the models. Solid, wearable fashion.

The biggest challenge one faces now is trying to figure out how to save enough money over the summer to be able to afford all these clothes when they hit store shelves. You have some time. Perhaps you could take out a second or third or fourth mortgage. Looking good is a necessity, isn’t it?

Thank you for reading. We’ll see you next season.