Mickey Mouse’s head as a handbag.

A live cockatoo perched on a shoulder.

Men’s underwear worn outside the pants.

Add in one reasonably spooky setting and, oh my, it must be another Allesandro Michele Gucci runway. That can be the only reasonable explanation.

Theater is in Michele’s blood and when it comes to producing a show the emphasis is as much on the entertainment value as it is on the clothes themselves. The difference between a presentation like this one and, by way of convenient example, the earlier Dior show, is that the clothes were as much part of the entertainment. Michele’s odd sense of styling is part of the fun of this runway, knowing that, no, one probably isn’t going to wear the look, at least not out in public, but seeing the pieces assembled in such bizarre fashion helps highlight aspects that might otherwise be lost or ignored if the styling wasn’t so outlandish. Michele’s concept makes great marketing sense.

That doesn’t mean the whole event wasn’t slightly disturbing. First, let’s consider the fact that this theatre, the Théâtre Le Palace, is beyond creepy old. This place was built about the same time the 13 American colonies were thinking about giving King George a reverse Brexit. You know there are some bewigged ghosts running around here. In the 1970s, it was one of Paris’ most debaucherous nightclubs. What went on here were the type of things that would disqualify one for public office if anyone present had actually been sober enough to remember any of the details. One gave up any pretense of consent when they walked through the door which meant everyone who was anyone wanted in.

The nightclub has been closed for years, though, and the whole place has that dusty feel to it where even the carpet objects to being disturbed. So, to capitalize on the inherent unsettling factor of the location, Michele opens with an Italian film from the 70s that is psychotically disturbing. Italian experimental artists Leo de Berardinis and Perla Peragallo made this short once upon a time and exactly how Michele got his hands on it is one of those questions to which we probably don’t want an answer. The film shows a young woman in a sequined dress having some manner of horror induced mental breakdown. If it had been shot today, it is the sort of reaction many are having to the news that Michael Kors is buying a stake in Versace. This is the stuff of nightmares.

By the time the clothes start walking down the aisles, no one should be feeling too terribly comfortable and that’s exactly the way Michele wants it because now everyone is paying attention. No one is relaxed and half-asleep. We see details such as the embroidery of flying pigs. The portrait of Dolly Parton on the back of a jean jacket doesn’t escape attention, nor do the Pure Optical lenses that remind one of the protective eyewear optometrists used to hand out after one’s eyes were dilated. No one missed the v-neck sweater vests that are making a disturbing comeback, nor the large-check green/yellow and orange/blue plaids that still haunt the memories of my childhood closet. That the underwear worn outside men’s trousers was pulled to wedgie height was discomforting, even with all the bling attached.

Then, right smack in the middle, Allesandro hits pause. A woman stands up and begins to sing. Wait, those of us who are old enough to remember these styles from their first time around know that face, and that voice. That’s legendary songstress Jane Birkin singing, “Baby Alone in Babylone.” This out-of-the-blue performance (no one had noticed her sitting on the front row) was beautiful and even had Vogue’s editor-in-chief smiling. Then, she finished, returned to her seat, and Michele’s insanity picked up right where it left off.

Back to tailored suiting, all manner of stripes, and don’t miss that logo’d backpack that’s probably going to sell out before stores in the Midwest ever see one. There’s a snakeskin print dress with spaghetti straps. Don’t miss the fetishy stuff with leather sleeves or the leather jockstraps. There are jumpers with chains for straps. Everything you didn’t know you wanted but, when deconstructed apart from the styling, one inevitably desires. 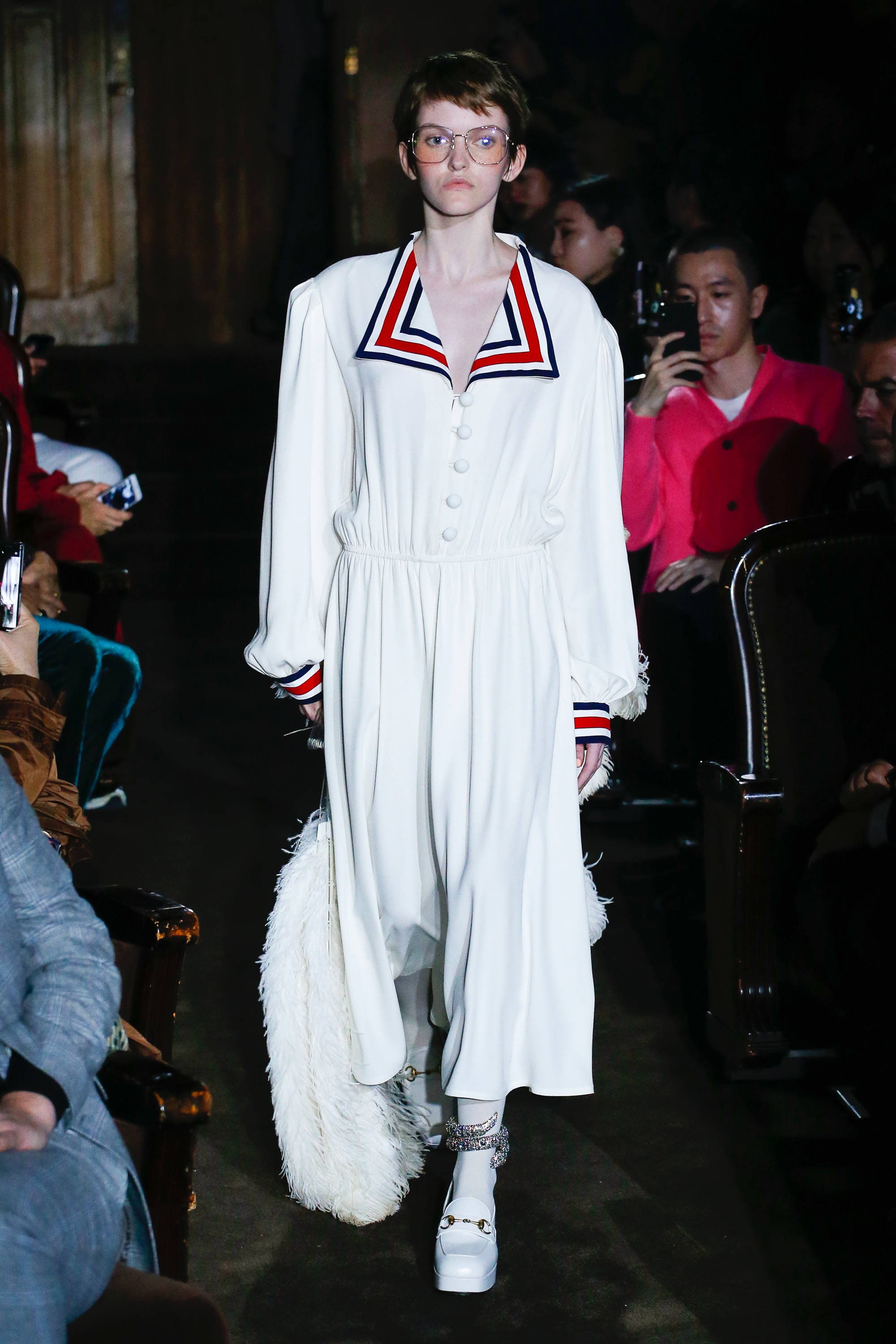 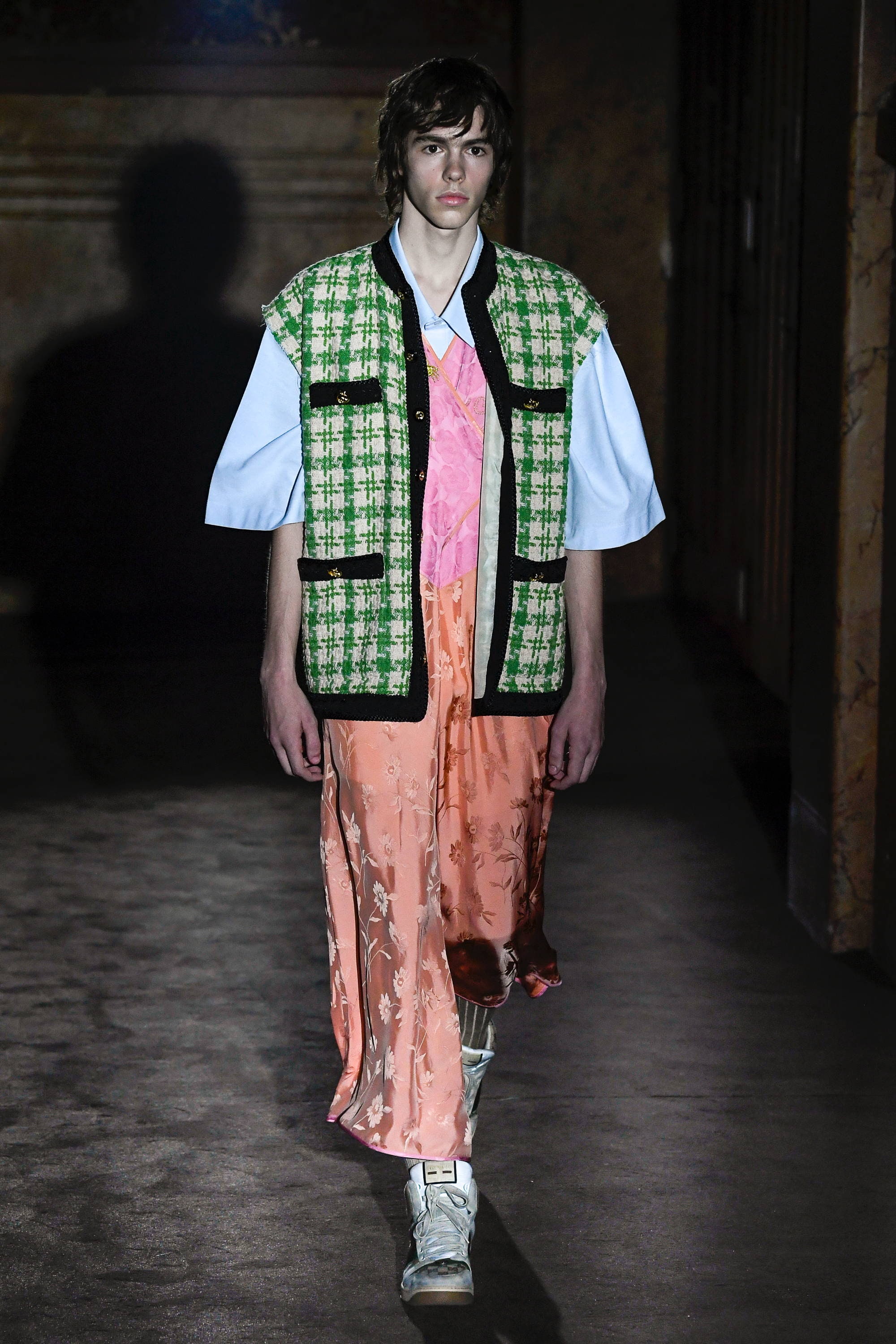 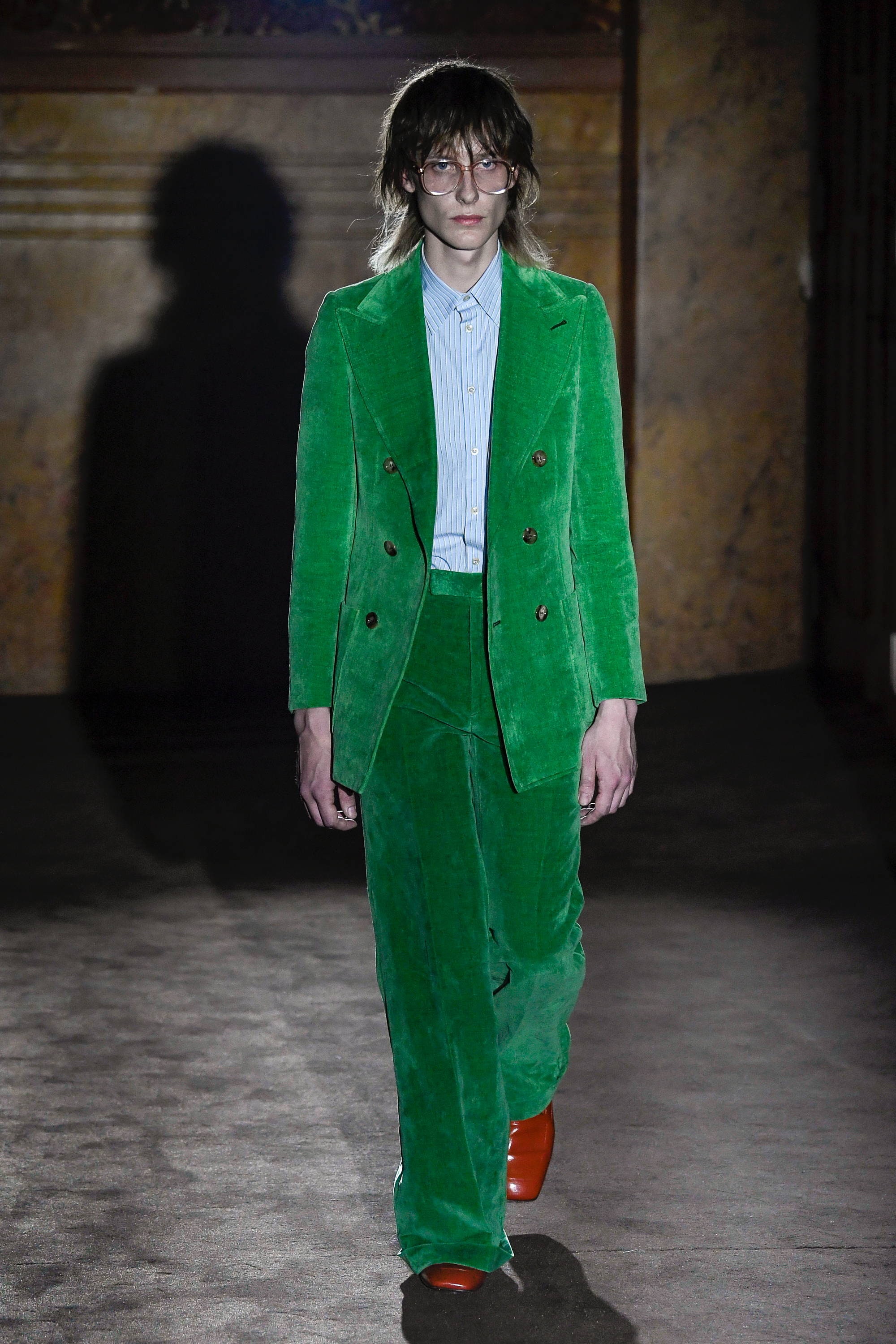 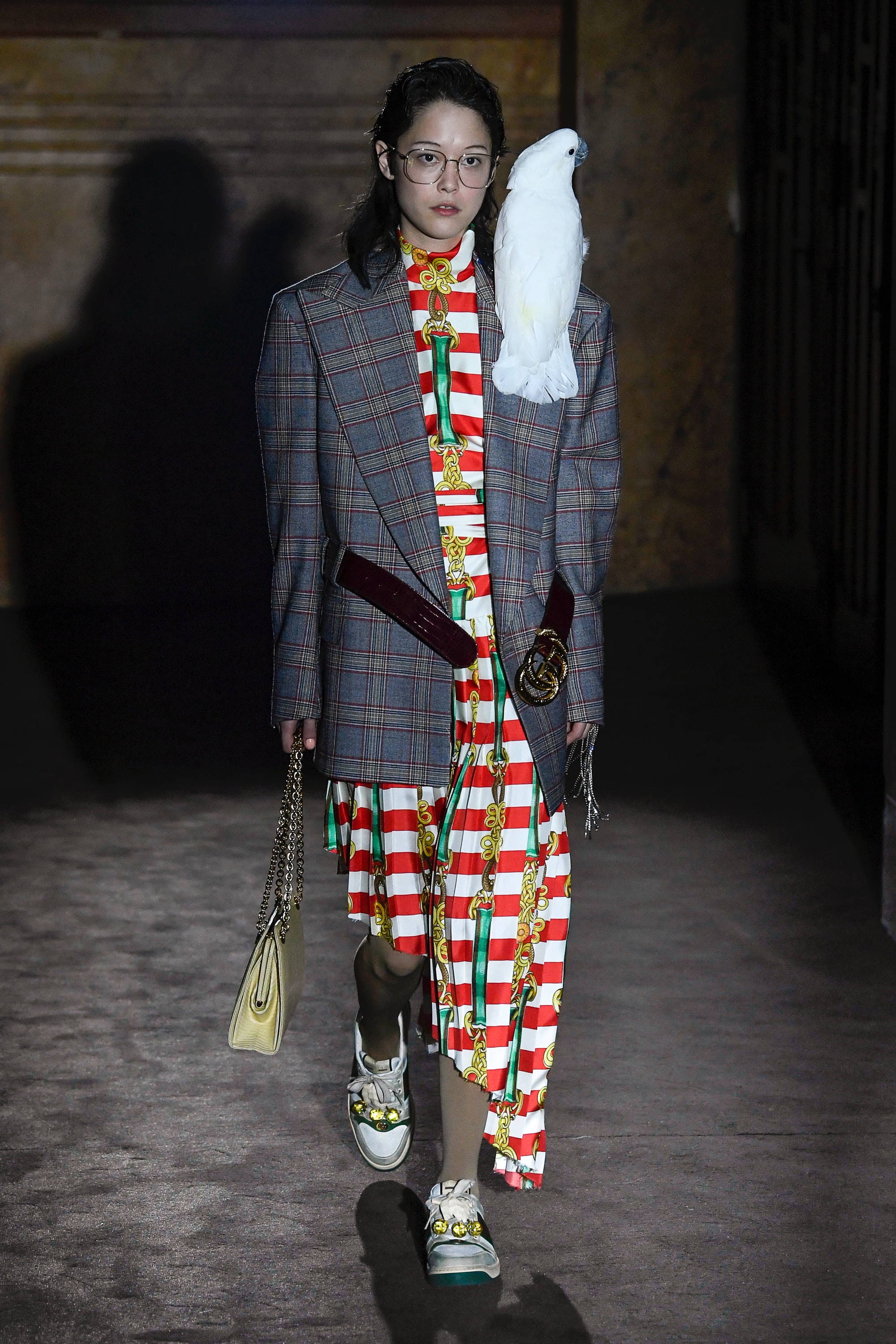 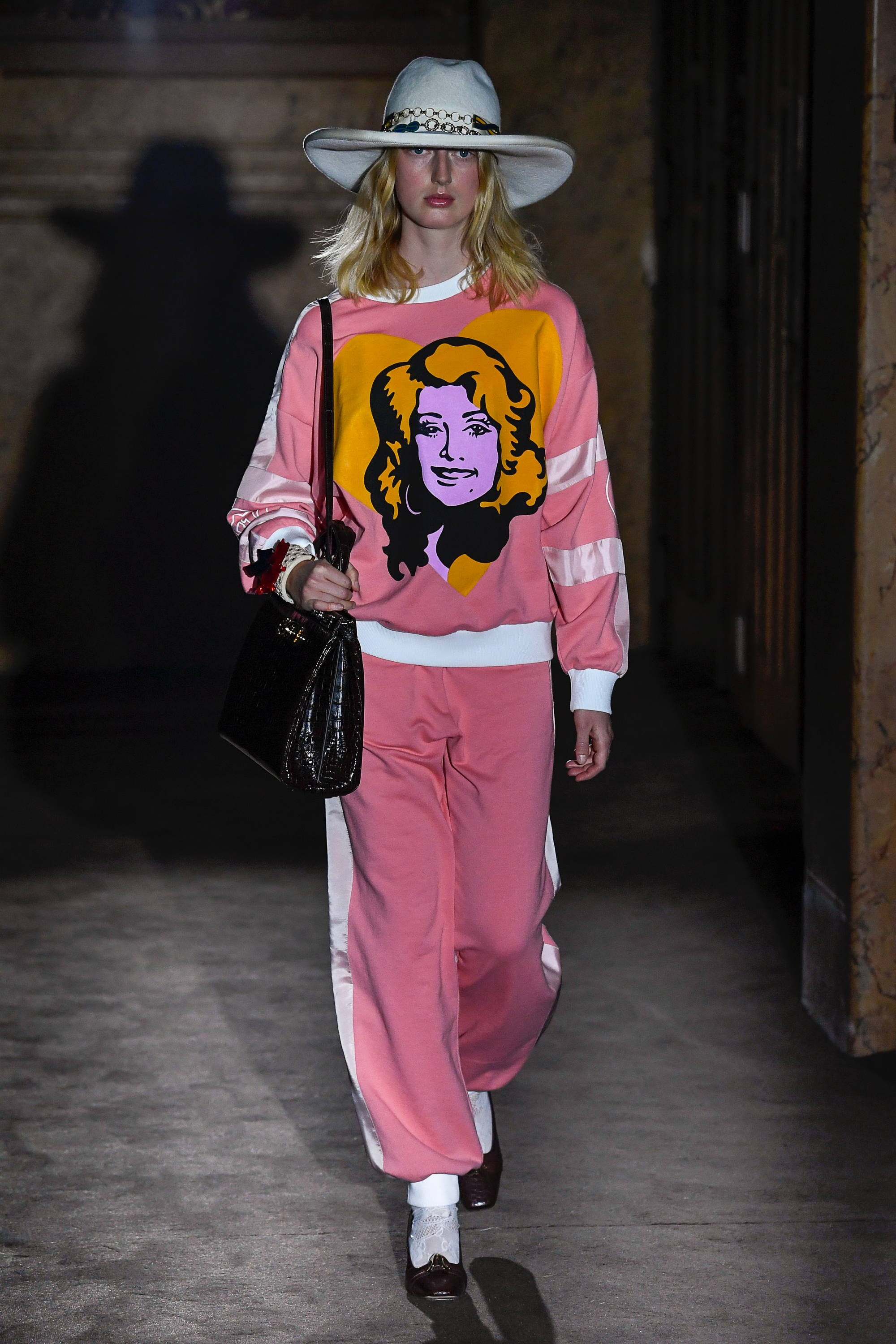 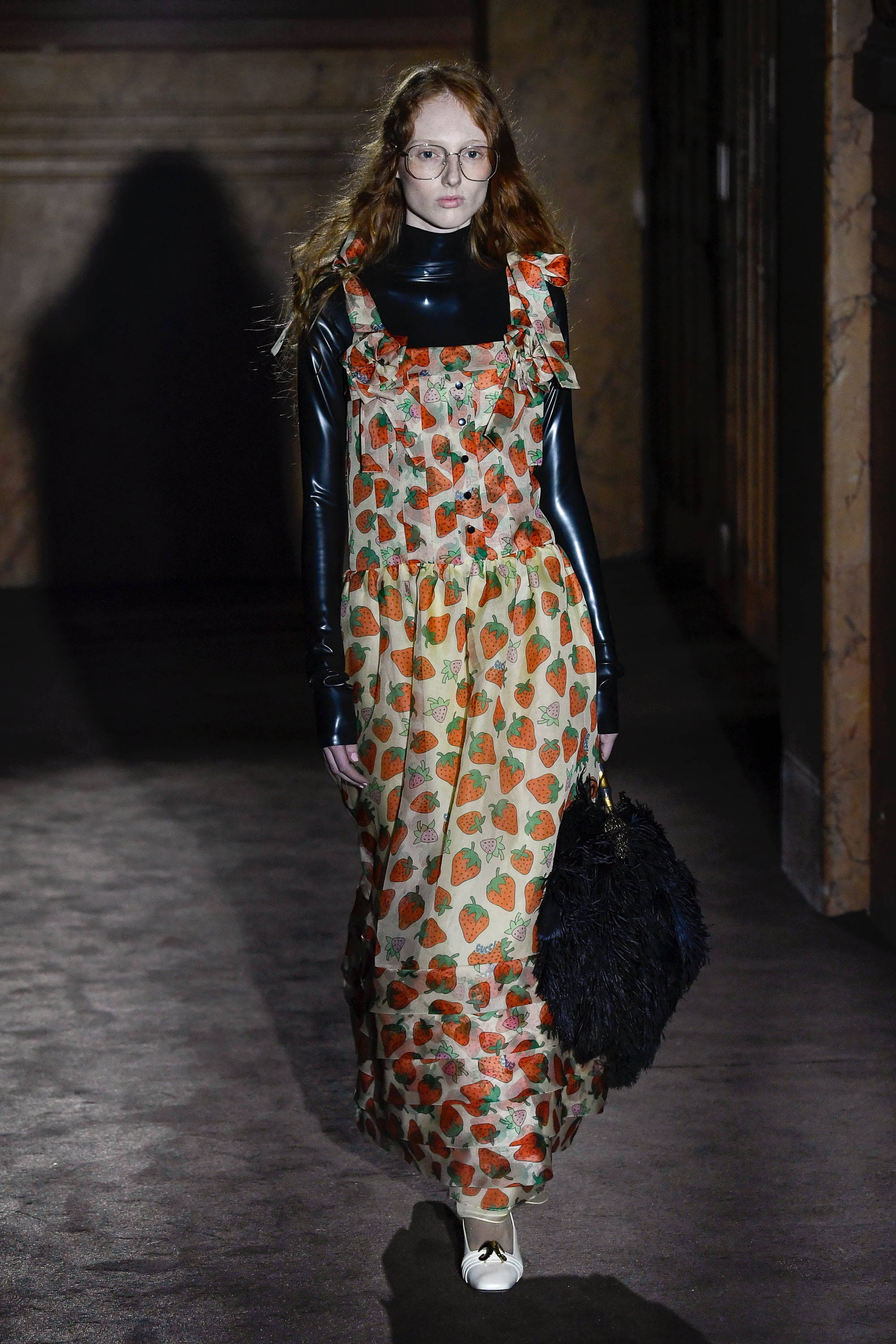 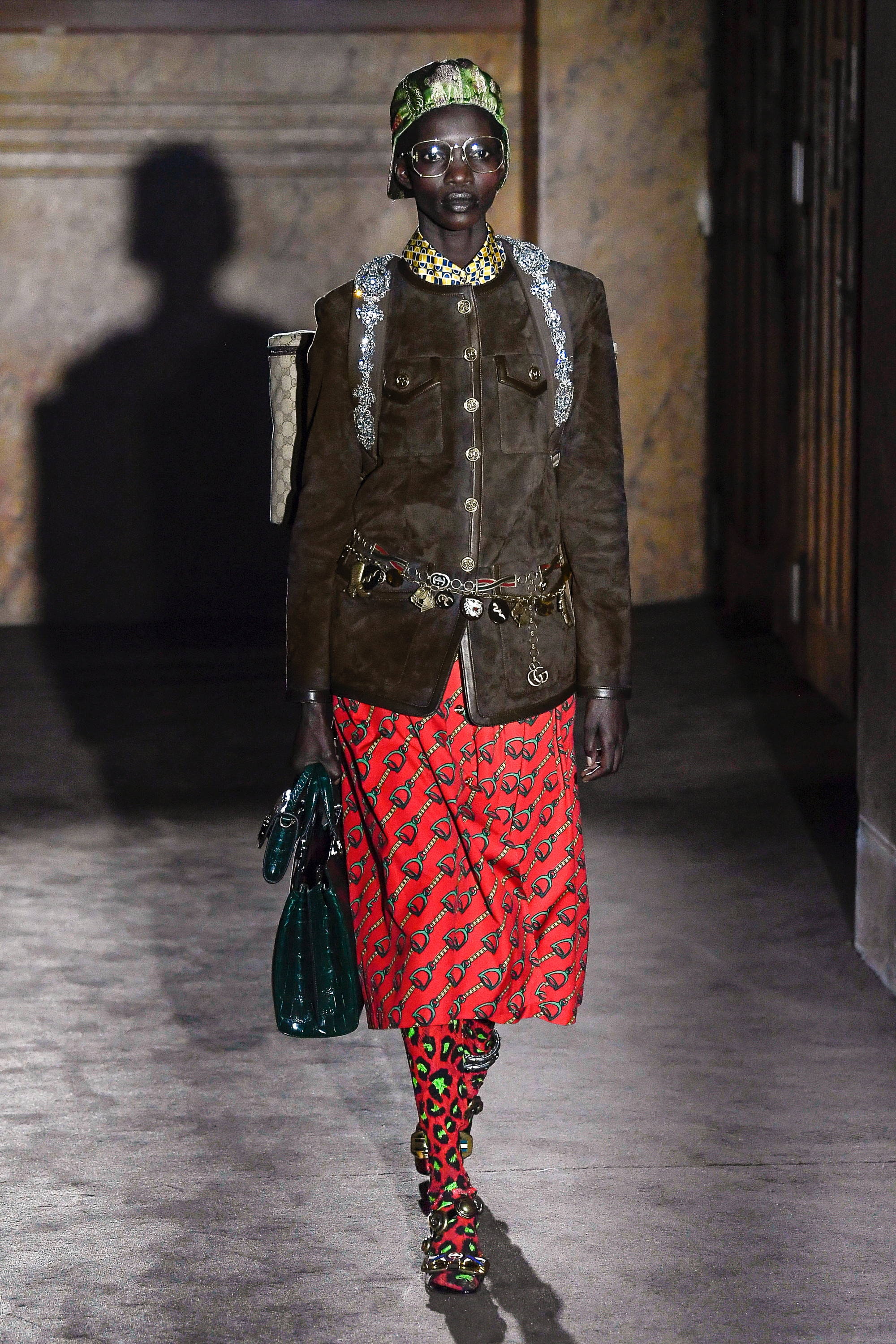 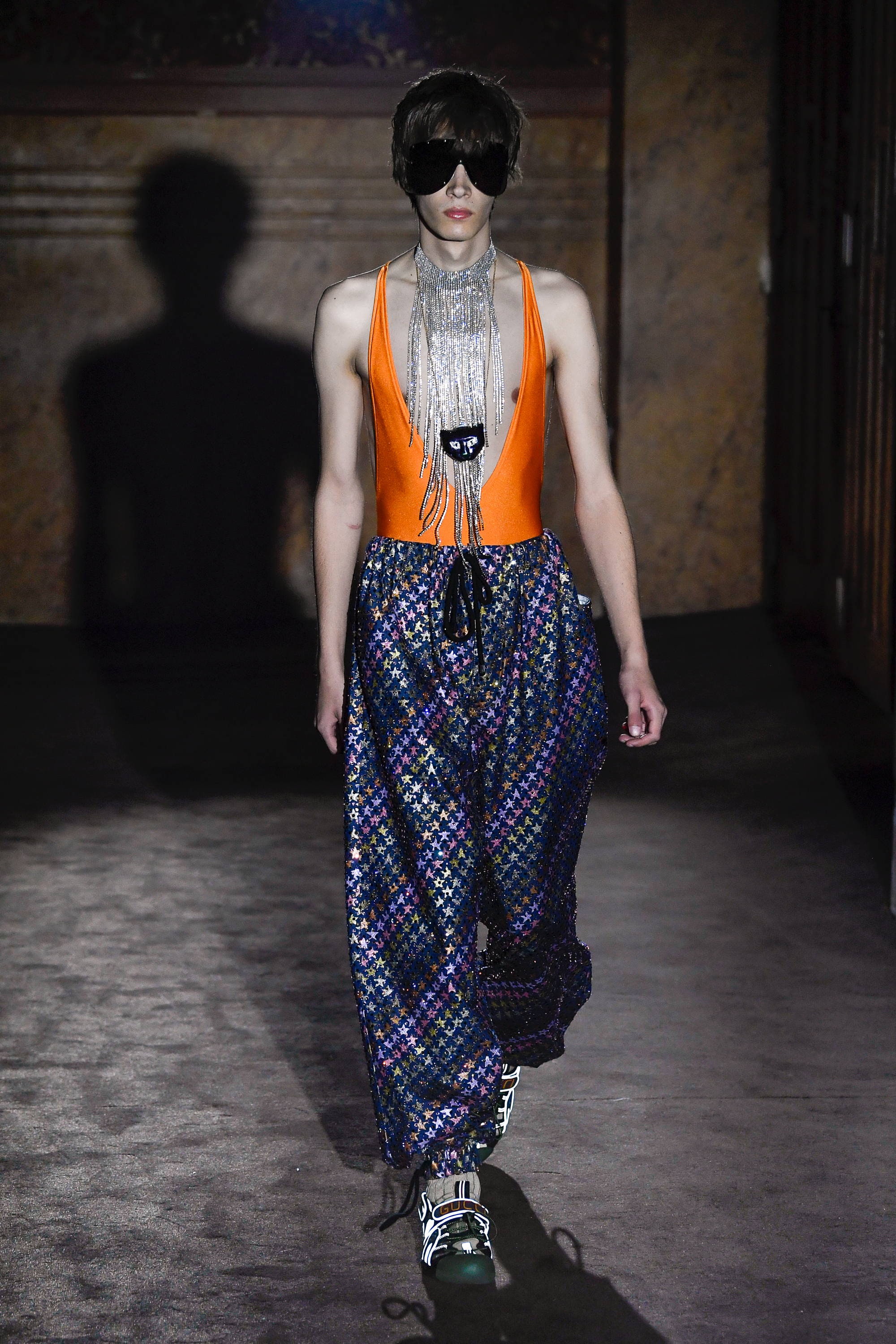 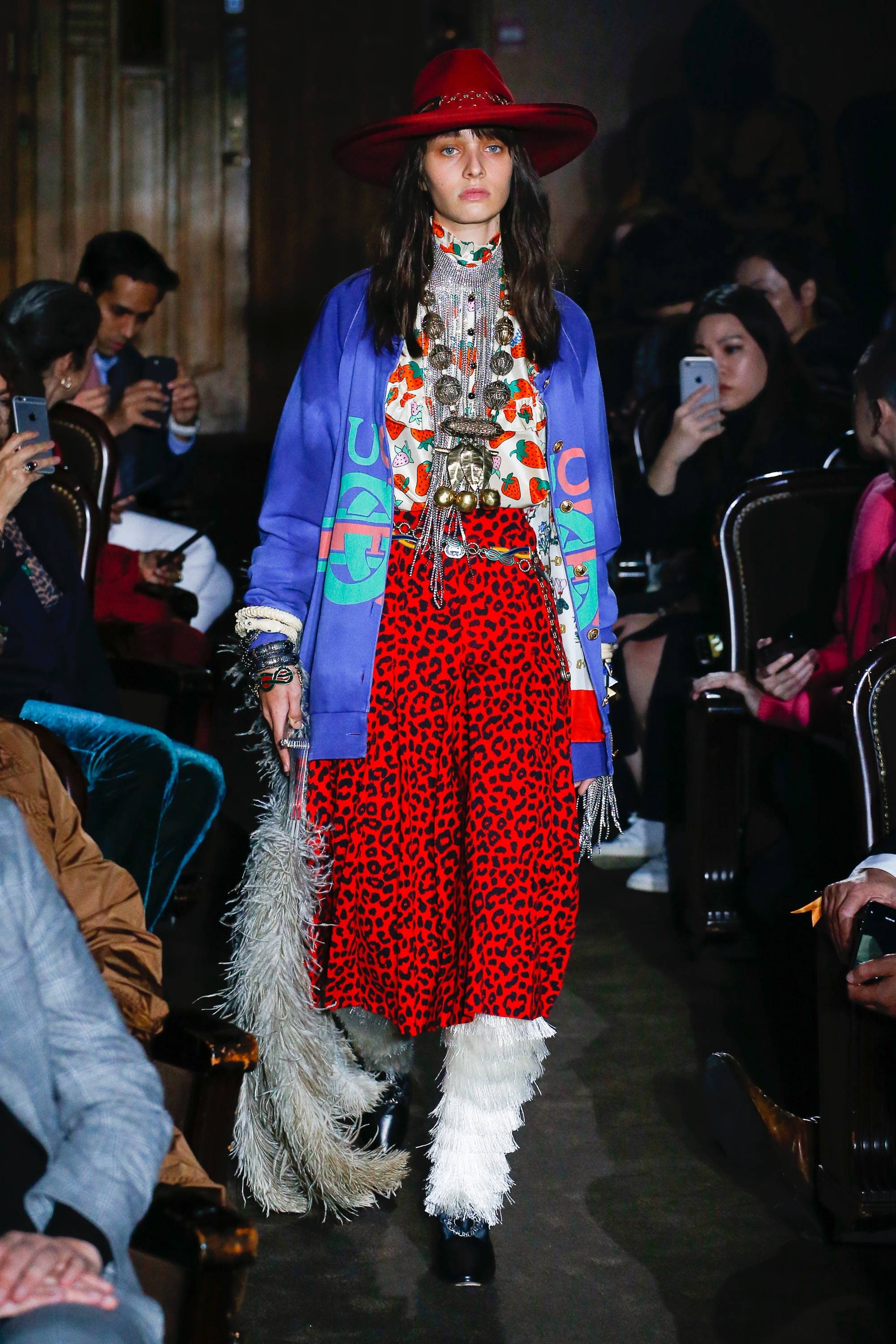 Most of the pieces in this collection are gender irrelevant, meaning that silhouettes are full enough that the clothes don’t care whether they’re worn by men or women. I fully expect at some point in the near future Michele will abandon the concept of menswear and womenswear in favor of peoplewear and that’s not a bad thing. One of the messages in this collection is that if one sees something that they like, they should wear it, even if it breaks every fashion “rule” in the outdated book.

Now, if we’re painfully honest, Michele is farming familiar territory. There are YSL and Issey Miyake references all over the place and Allesandro even dredged up what I’m pretty sure is an old Karl Lagerfeld look or two (I’m willing to be double-checked on that). One of the strong points of the designer’s genius is that he knows how to look at vintage clothes and pick out just the right looks, the right elements, to bring forward without committing to the whole shop. Sure, we see material and concepts from almost every 20th century decade from the 30s forward, but we see them at volumes that don’t feel like we’re being fed beans that have been sitting on the shelf for 60 years. The pieces are manageable even if the styling makes the runway looks a bit overwhelming at times.

This isn’t a collection one takes in and appreciates at a glance. In fact, if all one does is take the show at face value one may well run away screaming. Deconstruct the runway, though, and this is a fun and appealing collection. There’s good reason Gucci has seen a tremendous sales surge under Michele’s creative directorship and I don’t see that trend abating any at all.