One of the favorite games during Paris Fashion Week is trying to guess what over-the-top outlandish set Karl Lagerfeld has for the Chanel runway. Each season the sets grow more expensive as they move between simply elaborate and exceptionally stupid (remember the rockets?) Everyone already knew from the invitations that this season was going to have a beach theme. That Lagerfeld would have tons of beach sand trucked in was a given. The only question was whether he’d have water and, if so, would he install a wave pool so that the water would lap against his beach. I was strongly expecting the wave pool, despite the more numerous opinions that such an elaborate fixture was too expensive even for Chanel. I was right, though. There was a wave pool. Water lapped gently against Karl’s artificial beach and barefoot models walked through the make-believe surf—the perfect nonsensical end to a ready-to-wear season whose obsession with escapism and beachwear has too often made absolutely no sense.

I almost boycotted this season’s Chanel show after learning before the season started in September that former Wall Street Journal fashion editor Christina Binkley had been banned from the event. Actually, Chanel’s message to Binkley didn’t use the word “banned.” What they told her was that the facility, Paris’ Grand Palaise, was at capacity. Wait. WHAT? Have you ever seen the Grand Palaise? We’re talking about a building with 775,000 square feet of open space! One could hold a cricket match in there and have plenty of room for fans. Not to mention that Ms. Binkley is about a third the size of certain Vogue editors who seem to enjoy cozying up with Karl. And what could Binkley have possibly done to get herself banned from the show? “The PR are still upset I mentioned the Wertheimer family [which owns Chanel] in this 2015 story for the WSJ,” Binkley posted on Twitter. The Wertheimer family, headed by Alan and his brother Gerard, are worth somewhere in the range of $9 billion to $19 billion depending on which estimate one wants to believe. Apparently, they have one big giant stick up their backside if they’re banning Binkley over a three-year-old article that wasn’t even critical of the family.

My boycotting a Chanel show doesn’t actually cast so much as a ripple into Karl’s wave pool, so here we are. Watching another large group of models walk barefoot through the sand in clothes that are totally, without question, inappropriate for the beach. We’re talking boxy tweed jackets and suits that are modified for the season with simple things like swapping around a few buttons, leaving some buttons undone so that there’s a hint of cleavage, adjusting sleeve length here and there, and mismatching jackets and skirts because that’s another one of the stranger trends we’ve seen this season. The difference here is that the Chanel woman isn’t likely to be picking her clothes up off the floor. She has “help” to do that for her.

What is most noticeable about this collection is the insane amount of branding Karl is pushing. He has separated the label’s name into syllables—CHA and NEL—and then put them on separate pieces, such as different sides of a set of jeweled earrings, or CHA on the bill of one hat and NEL on the bill of another (no, you’re not crazy, that makes no sense at all), as well as on belts and pockets. He is also really pushing those useless fingerless gloves he loves so very much. Stop and let that one sink in for a minute. Fingerless gloves on the beach. He’s really putting Chanel women in a questionable state of mental stability with that one.

Mind you, this is Chanel. There’s nothing coming down this beach that doesn’t bleed the house aesthetics. The problem is that it is that same set of house codes that make the clothes inappropriate for the setting, no matter how much expendable income one has.

Here, take a look at a few samples from the 80-plus-look collection. 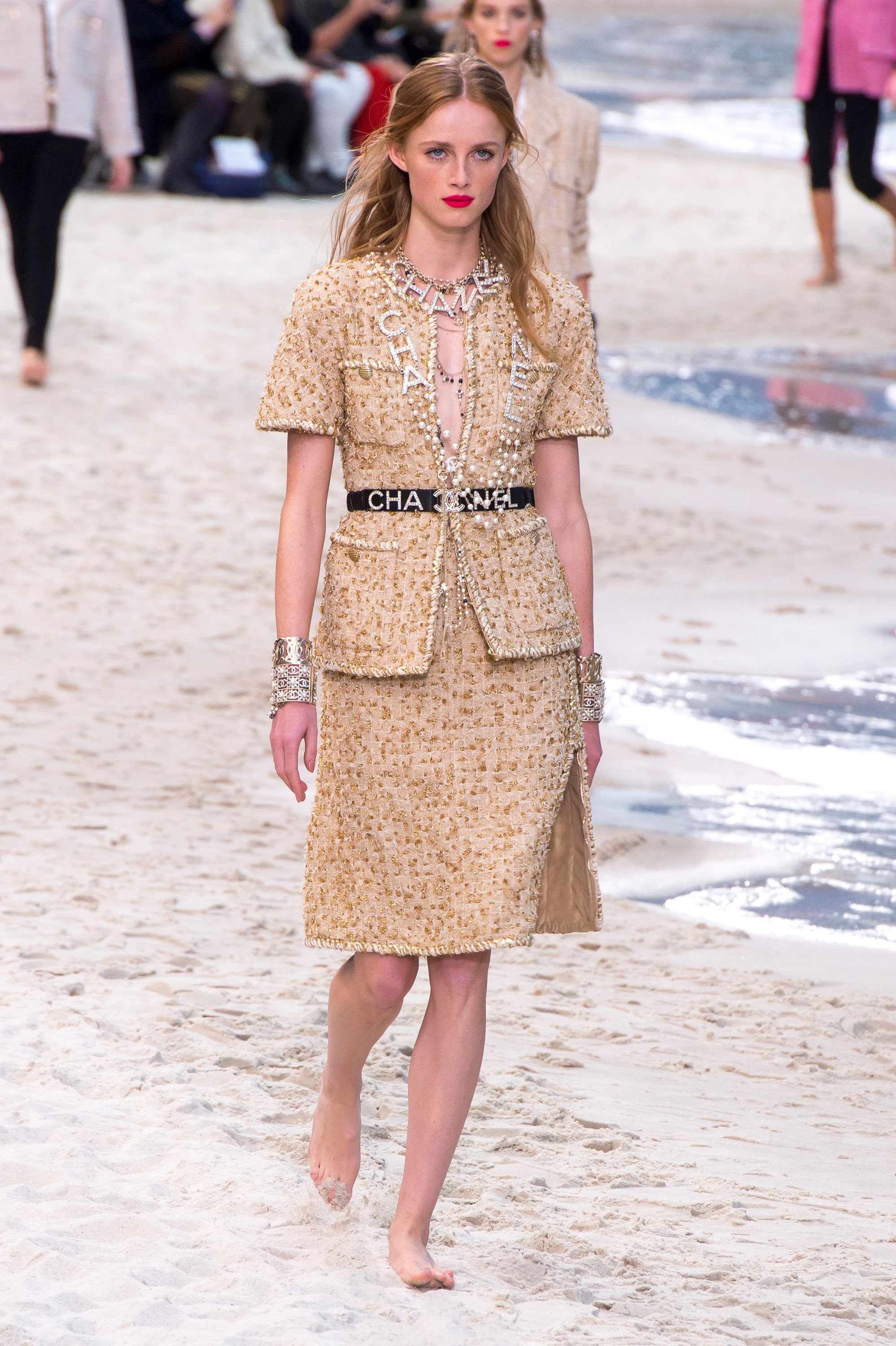 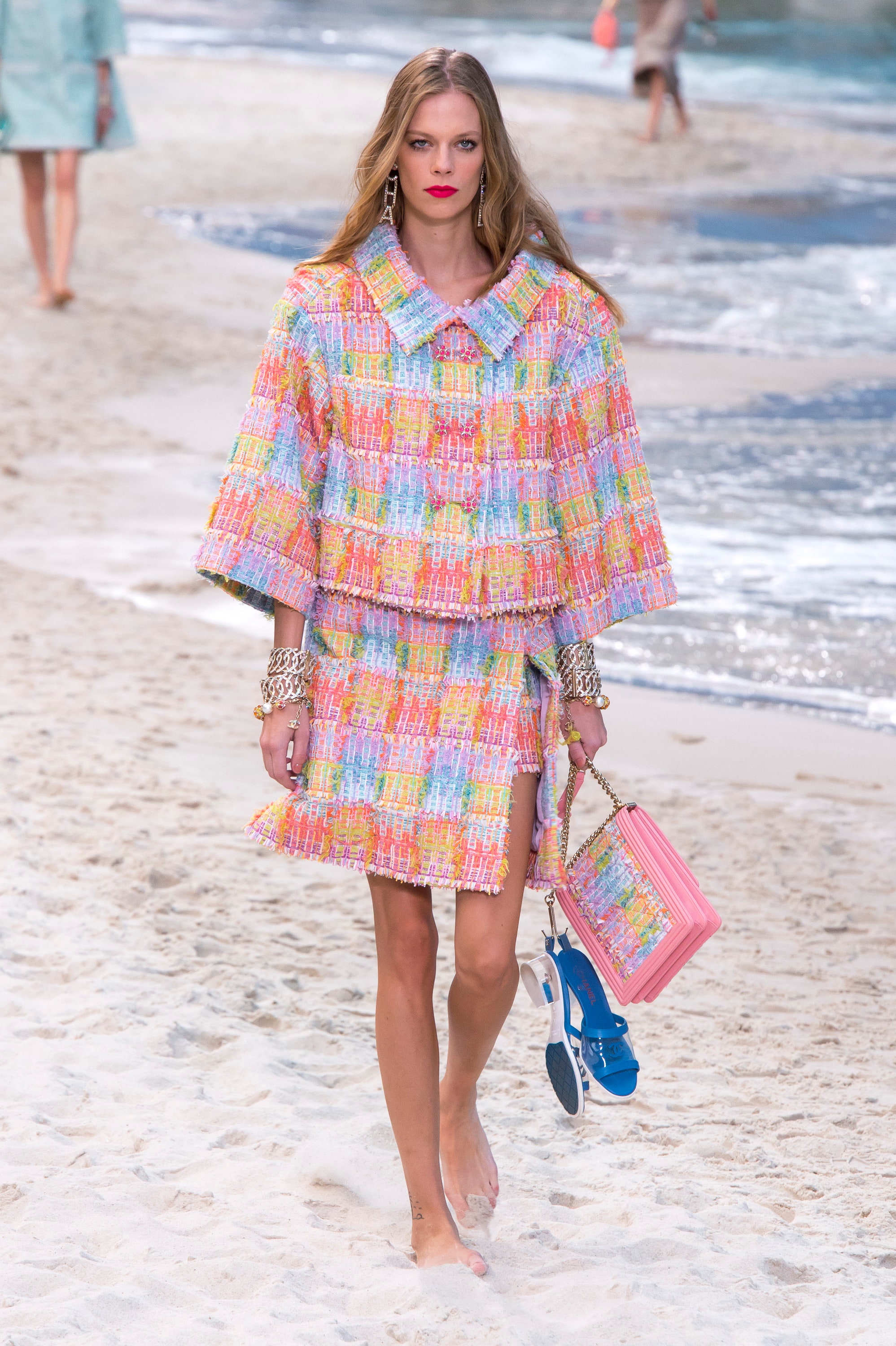 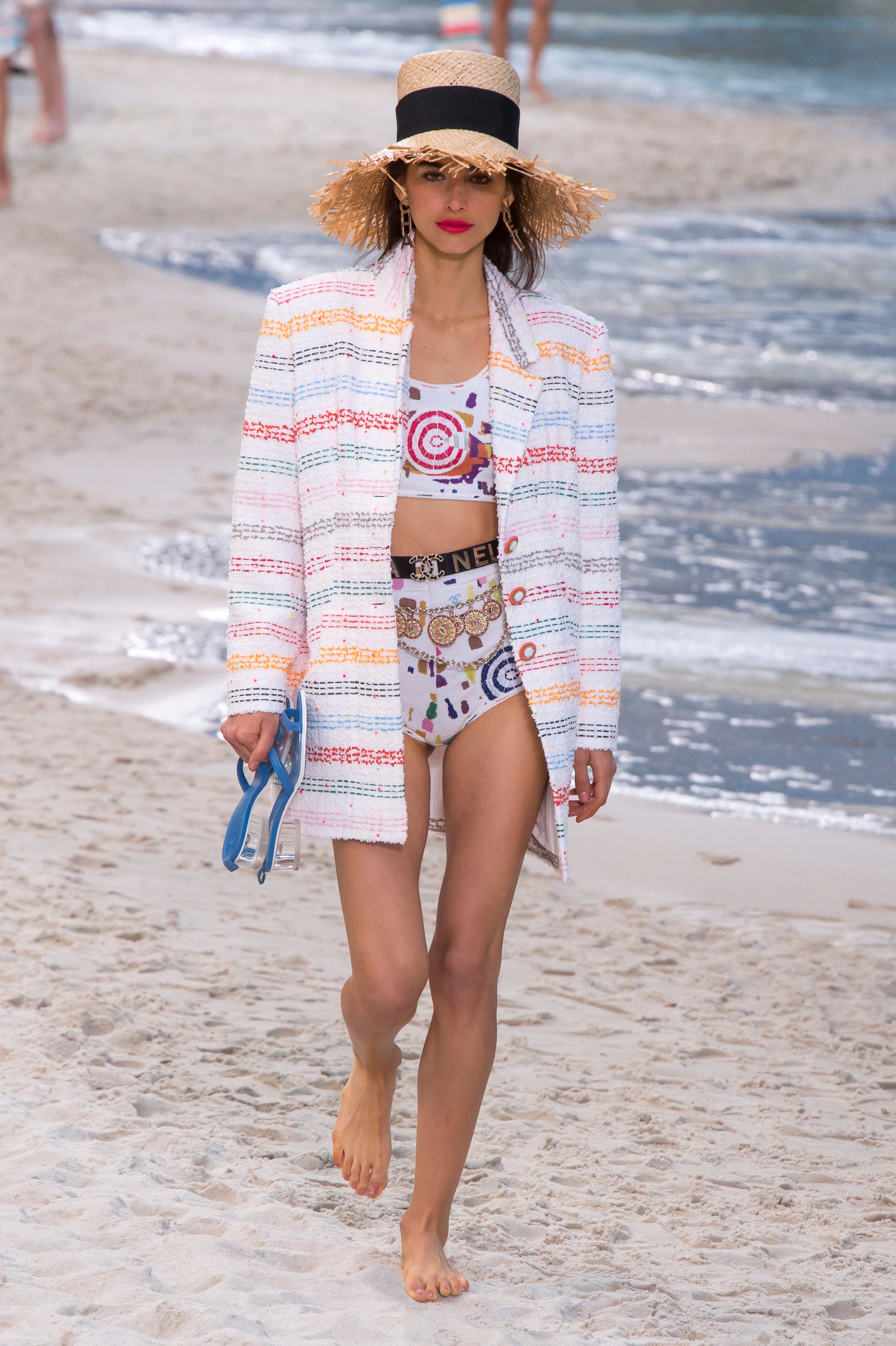 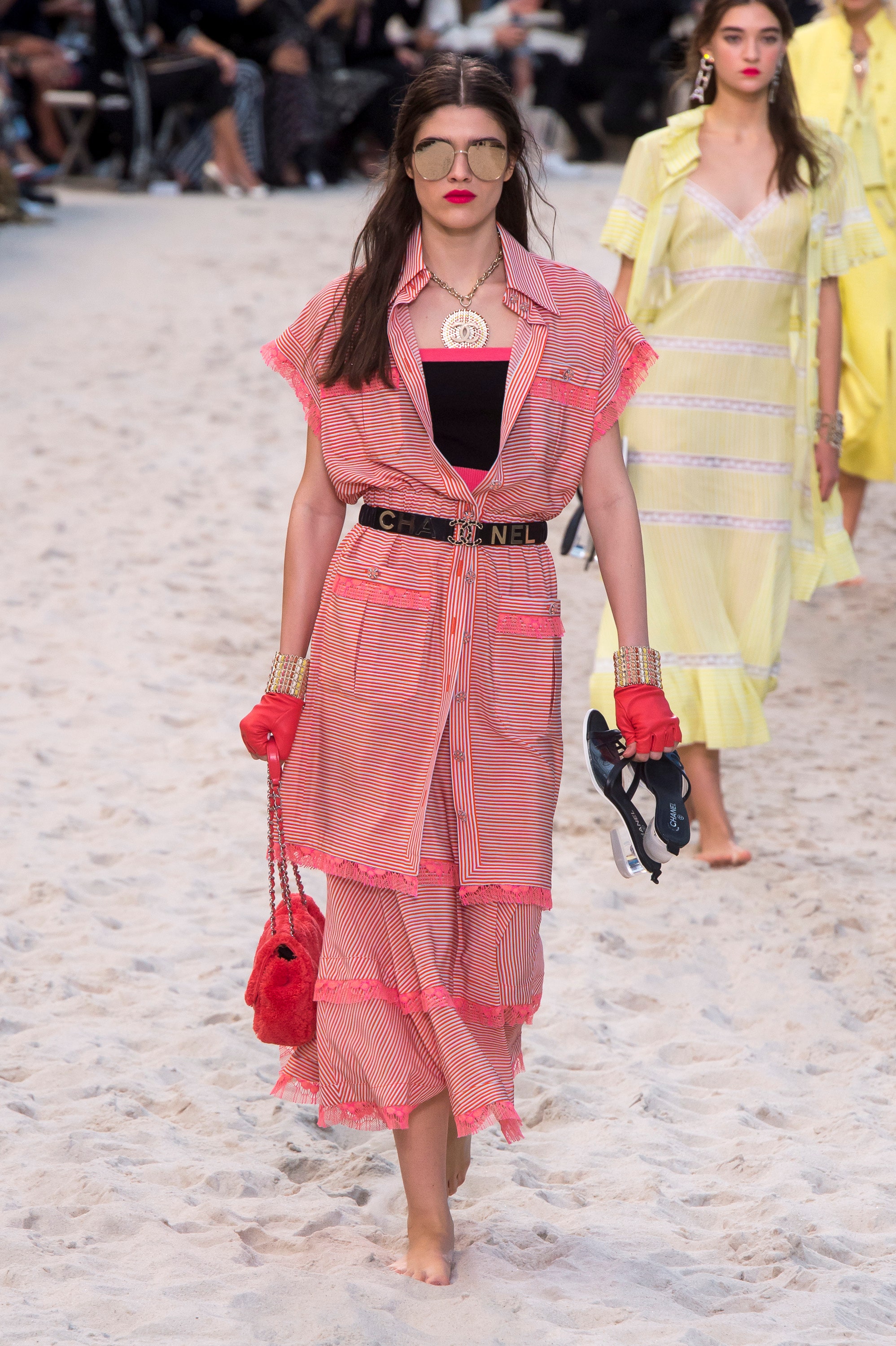 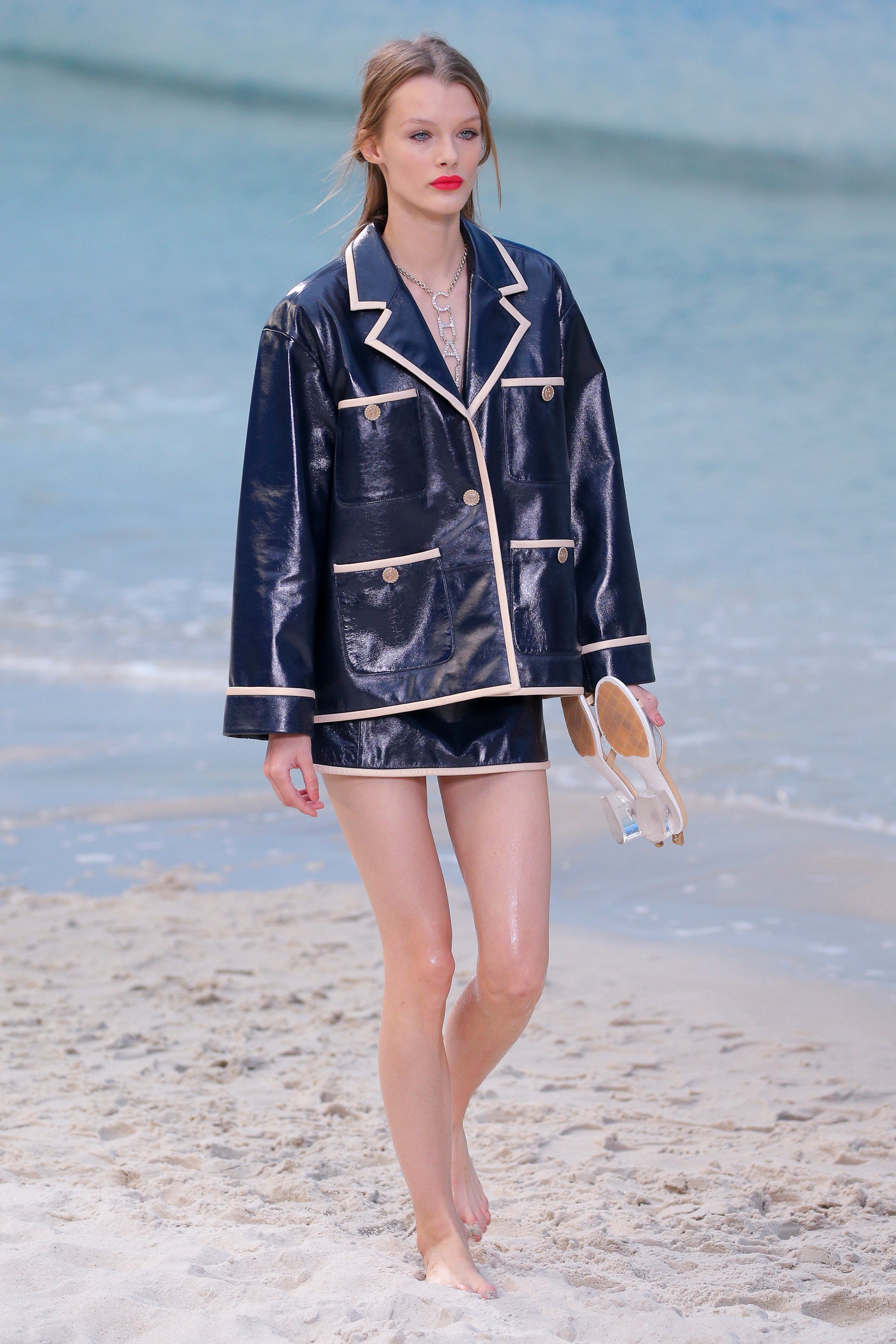 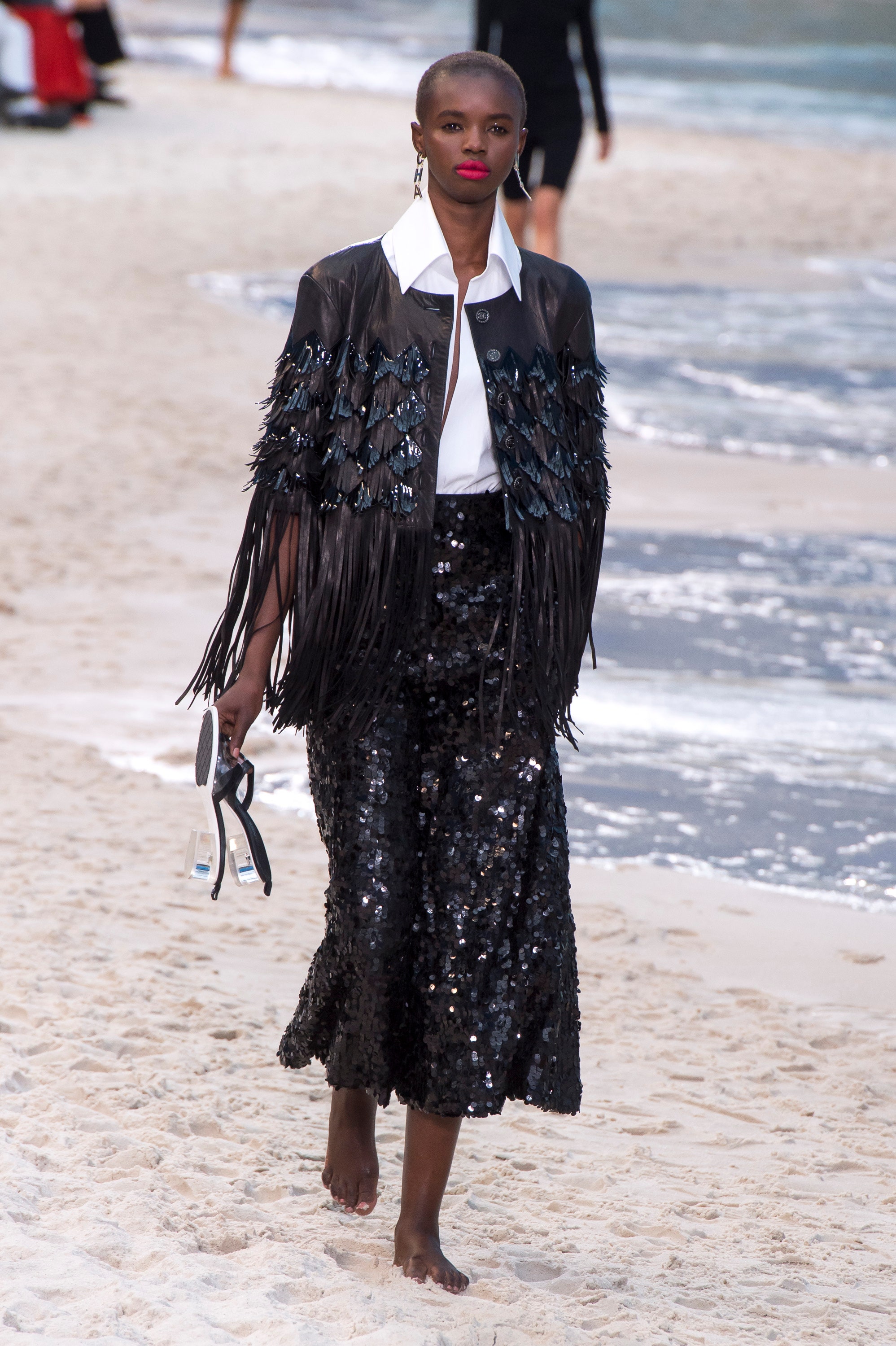 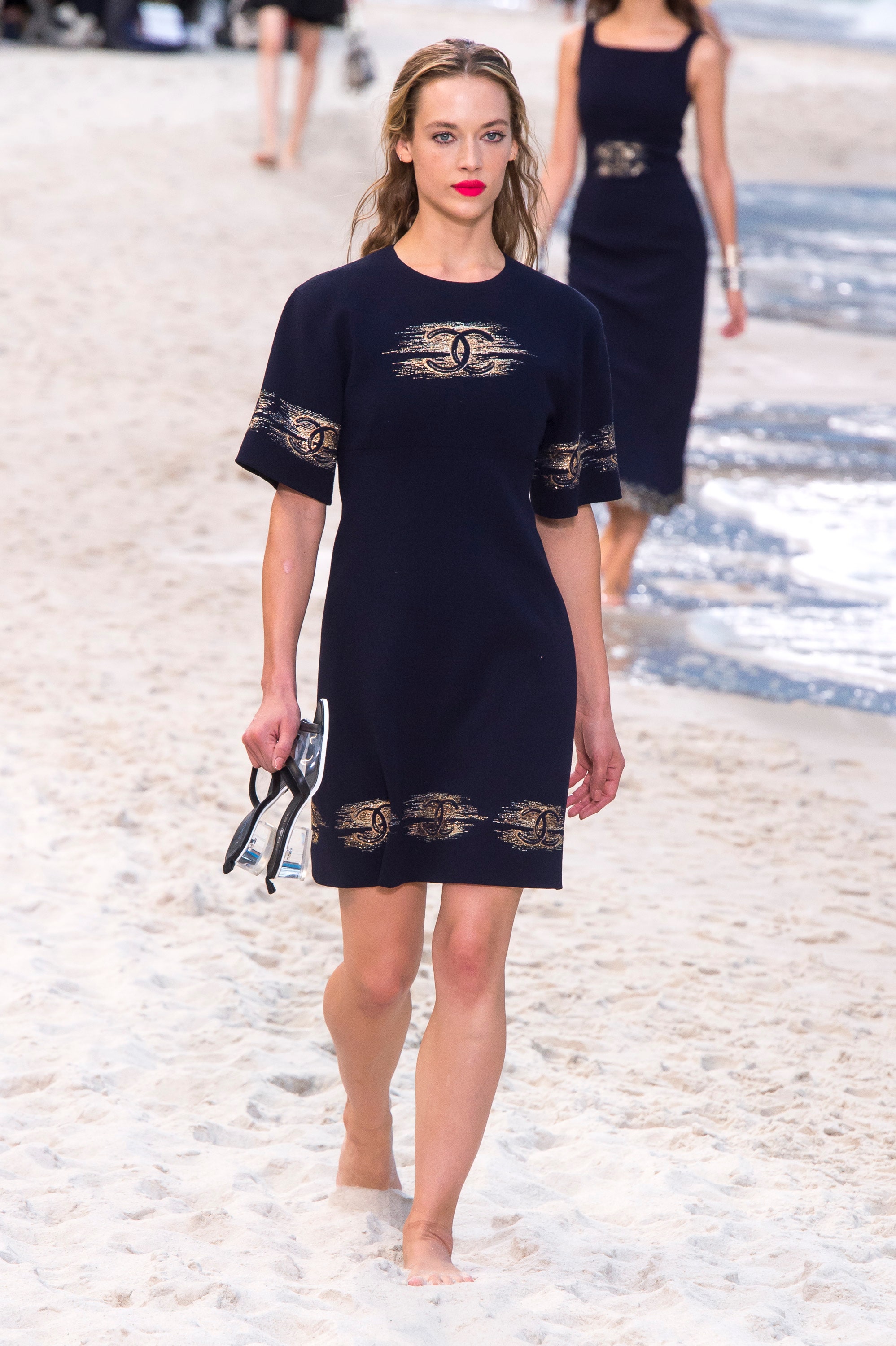 In a meager attempt to be fair, it’s not like Lagerfeld didn’t try to adjust the aesthetics at all. There are a few slip dresses that are appropriately light and breezy. There are also some pieces that look like swimwear and have the appearance of biking shorts. However, one should note that this is not a swimwear collection and wearing those pieces into the water will ruin them. Similarly, wearing the biking shorts while biking is likely to produce undesired results for both the garment and one’s skin.

This set and this collection give further credence to the criticism that Lagerfeld is a trend-jumping opportunist. There was no good reason for Chanel to do a beach runway or try to make its clothes fit the escapist trend. Women who wear Chanel are not trend chasers themselves, so why should their designer give into that impulse? While I understand the benefit of creating a spectacle around a runway show, This inadequate attempt only served to further emphasize how out of touch the brand is with the current market.

Chanel is no longer among the top 20 fashion brands. If they want to regain market share and attract a more long-term following then perhaps they would do well to look at updating those house codes, maybe move away from the tweed and the boxy suits a bit, reimagine those old silhouettes rather than just moving or removing buttons. Maybe they need a younger creative director who doesn’t impose his own ego upon the brand.

Something someone named Wertheimer should think about.