We are quite accustomed to Balmain being edgy and sexy and sometimes just a wee bit over the top. Olivier Rousteing has never been one to hold back or play shy with his clothing so we’re not surprised by large cutouts around erogenous zones or heavy use of sheer fabrics. All that is just part of the standard Balmain experience.

This season, though, which I am going to refer to has his Gold Collection for reasons that will soon become evident, Rousteing went so far over the top that any retreat in latter seasons is going to be a disappointment. He is in full-on Amazon mode where the more you have to flaunt the more he’s going to flaunt it. This collection is made for women who have an aggressive attitude and a strong personality to match.

Walking to a soundtrack that was heavy with hair bands including Aerosmith and Bon Jovi with a little Nirvana thrown in, there were times when it seemed as though models were stomping out of the fiery forge with molten gold still dripping from their clothes and they set out to take over the world. Olivier went strong on the visual effects, too. The amount of beadwork alone os mind boggling. Nothing in this collection is allowed to be flat and boring. Even the rare t-shirt is adorned with a fierce wolf print. By the time this 80-piece collection is finished walking, you’ve left sitting there, trying to catch your breath, and pretty sure you should run and warn the populace before they are consumed in the attack.

I’m going to skip right over the few looks worn by the Instagram goddesses. While I understand why Olivier used them, the same reason anyone uses them, the little girls from SoCal really didn’t fit these clothes. The same is going to hold true for a number of young Midwestern women as well. One doesn’t wear this Balmain collection because it’s cute or trendy or featured in any given magazine. One wears this gold-toned collection because it fits you; it fits your lifestyle, your personality, your experience, and your attitude. The downside to that is some people wearing these pieces will just look silly. The upside is when someone wears it well you’ll remember the experience for a long time.

Olivier has always had a bit of a tribal feel to his Balmain collection, and that aspect has always been popular. He ramps that up a lot this season, though, with clothes that, at their base, either are or at least appear to be based in animal hide. I’m sure the folks at PETA are not happy. We should probably add here that a number of the looks are synthetic or dyed. No exotic or endangered animals skins are actually used in any of the clothing. That being said, however, the ways in which Rousteing works with leather to give it a more raw feeling is quite impressive. Add hand work beads and embroidery on top of that and one comes away with incredible looks such as this: 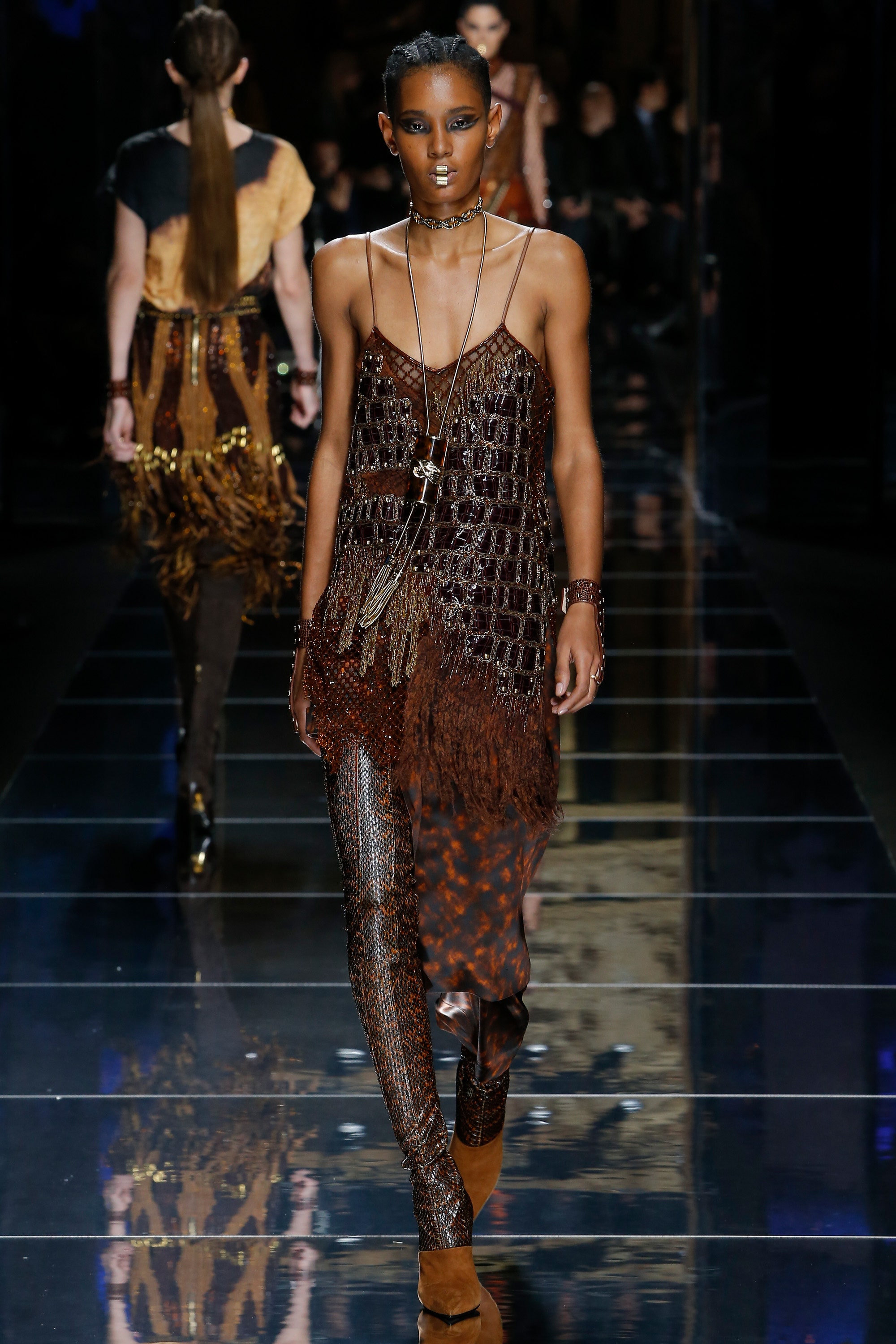 See what I mean? This probably isn’t what one wears to grab a burger and then go chill somewhere. This is social battle gear designed to create a stir and leave a stream of murmurs in one’s wake. In look after look, Rousteing doesn’t back off.

One of the trends that’s been really big this season is capes. Another consistent trend has been rivets. Olivier puts them together in a cape coat that is more stunning to see walking than this still phone can begin to communicate. 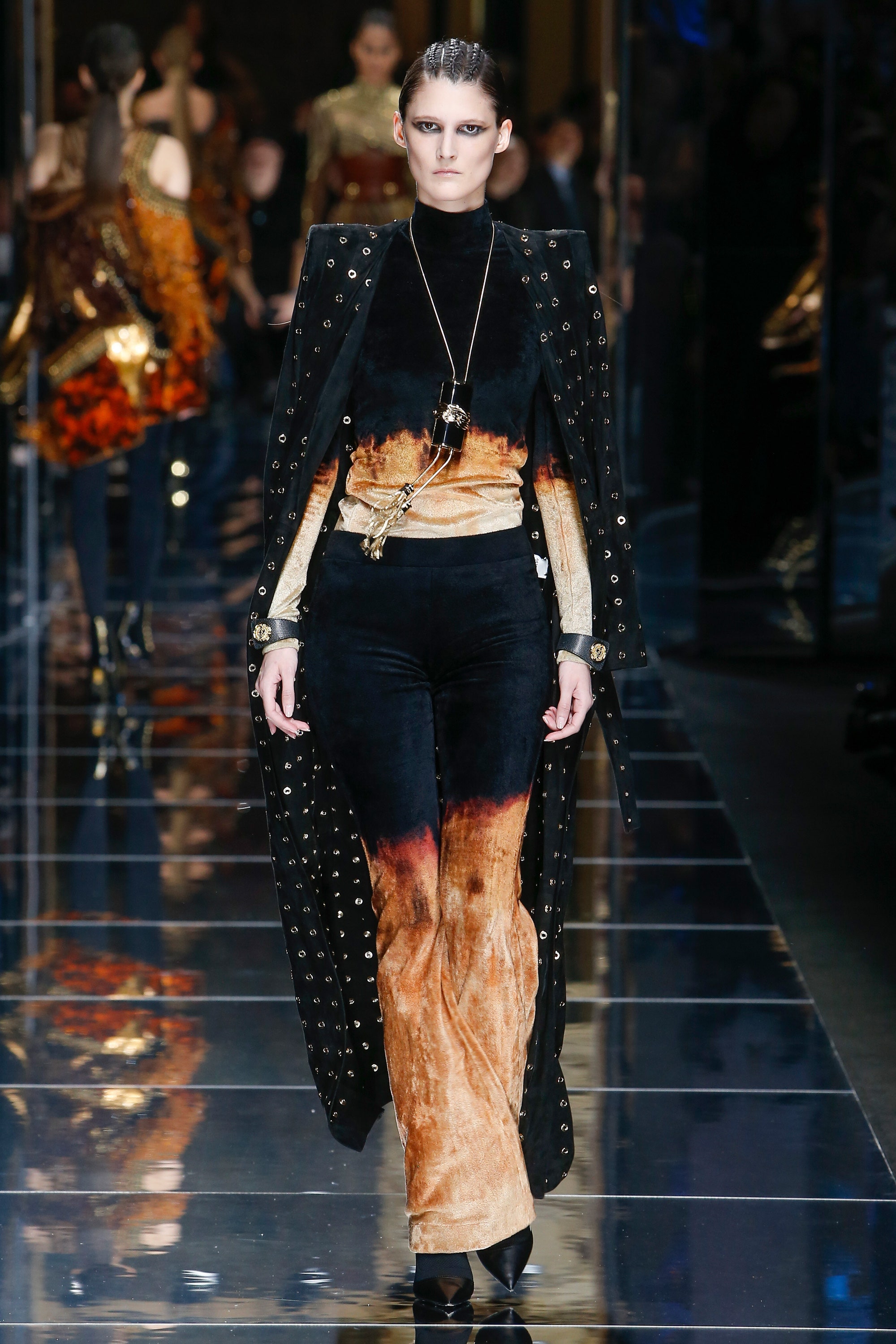 The cape coat is a consistent theme and while he doesn’t put one with every look, there are 14 of them, if I counted correctly, giving plenty of flexibility to match one with a common set of looks. While a significant number of them are black leather at their base, another version that walked incredibly well and seems more appropriate for the Midwest is this full-length shearling and suede number that could have easily stepped off the American plains. 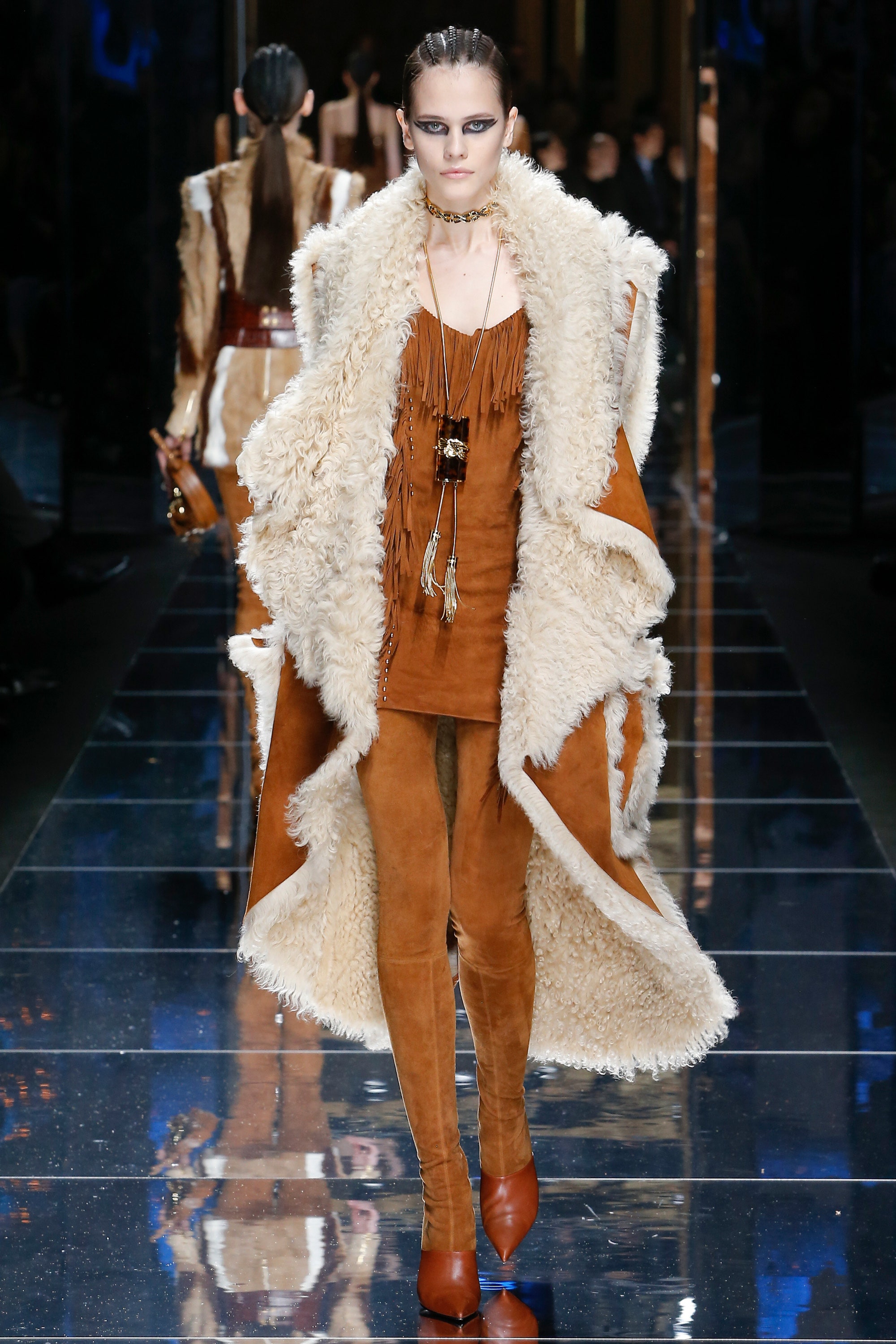 Animals play a significant part in this collection, not only in terms of material, but thematically as more of a spiritual influence. Granted, the faux tiger-striped dress that came down the runway at look 18 was incredible to watch in motion. but there were three times where I found myself catching my breath as the pieces went past. I’ll apologize in advance for the fact that still pictures are woefully insufficient to deliver the impact.

The first is the wolf print that he uses on multiple different pieces. Where the print is surrounded by other elements, such as shearling or beaded skirts it’s not quite as strong. When one gets a look at the full t-shirt, and it seems rather strange to be saying this about a t-shirt, but the image is impactful. This is an independent predator, both hunted and hunter, experienced in the skills of survival. 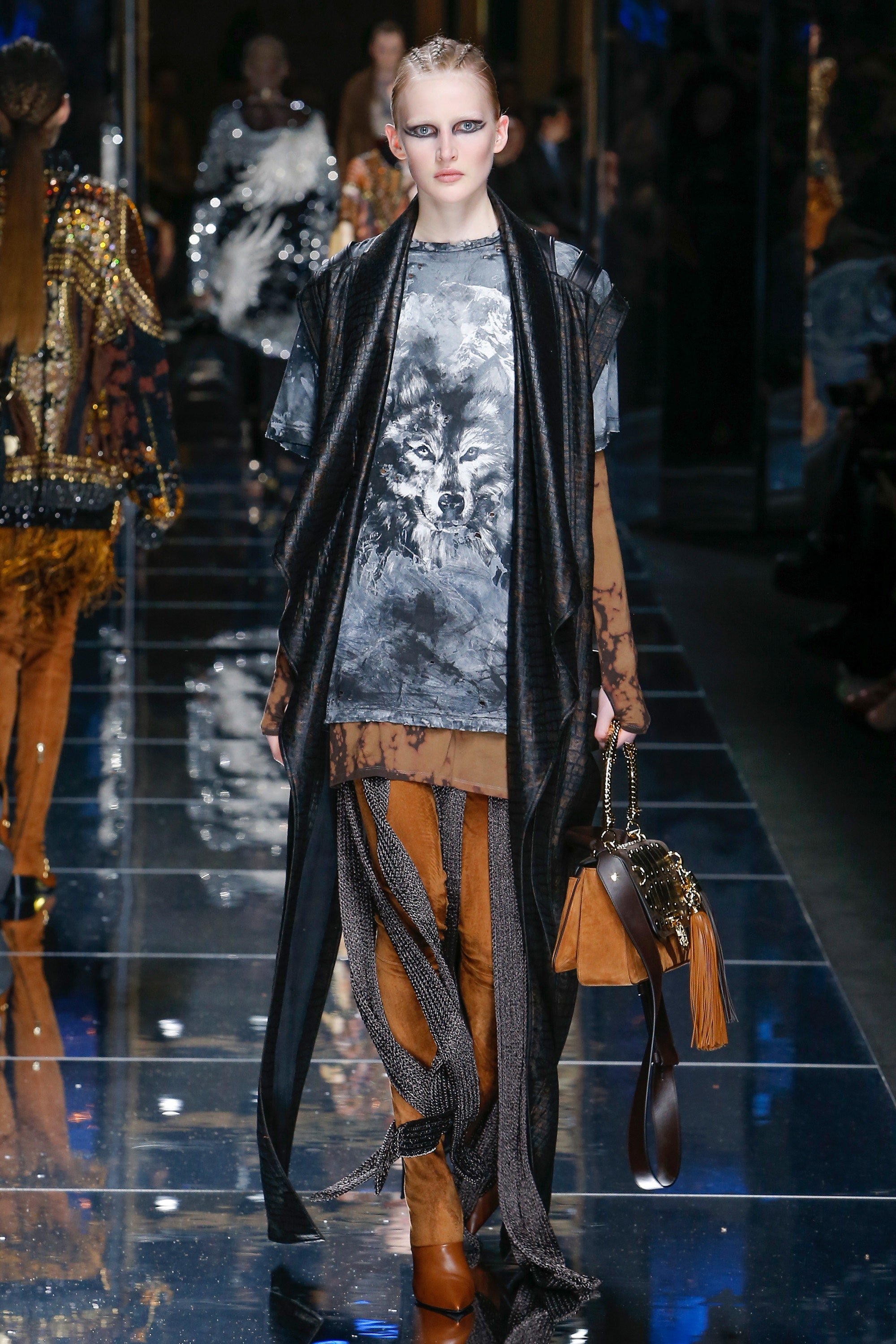 Again, one doesn’t just wear these looks to the average ball game or community past time. These pieces all make a statement and making statements doesn’t always make the people comfortable. Let’s take this embroidered lion crafted into this cover of gold bead netting for example. There is an implied aggressiveness here, one’s passionate commitment to care for one’s extended family and the community that supports them. At the same time, the handwork is so incredibly exquisite that I don’t see how one could not be awed by its beauty. In fact, this is one of those pieces one might be tempted to buy and simply put on display over a swath of black velvet. 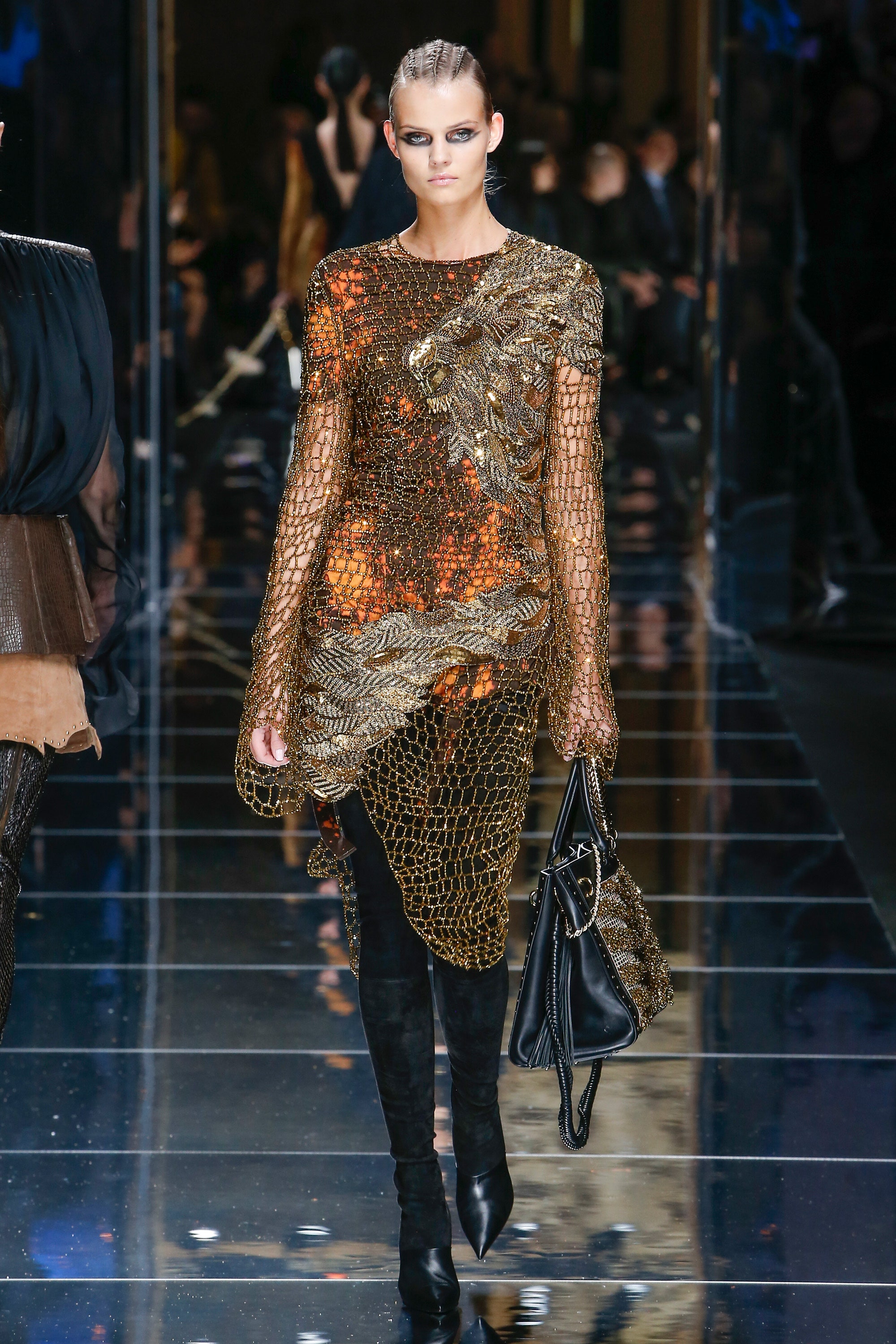 Then, recognizing that there is a strong aviary influence to tribal folklore, Rousteing includes this incredible sweater where sparkling silver wings seem to carry a spiritual message of strength and independence, soaring above all the chaos and trouble below. 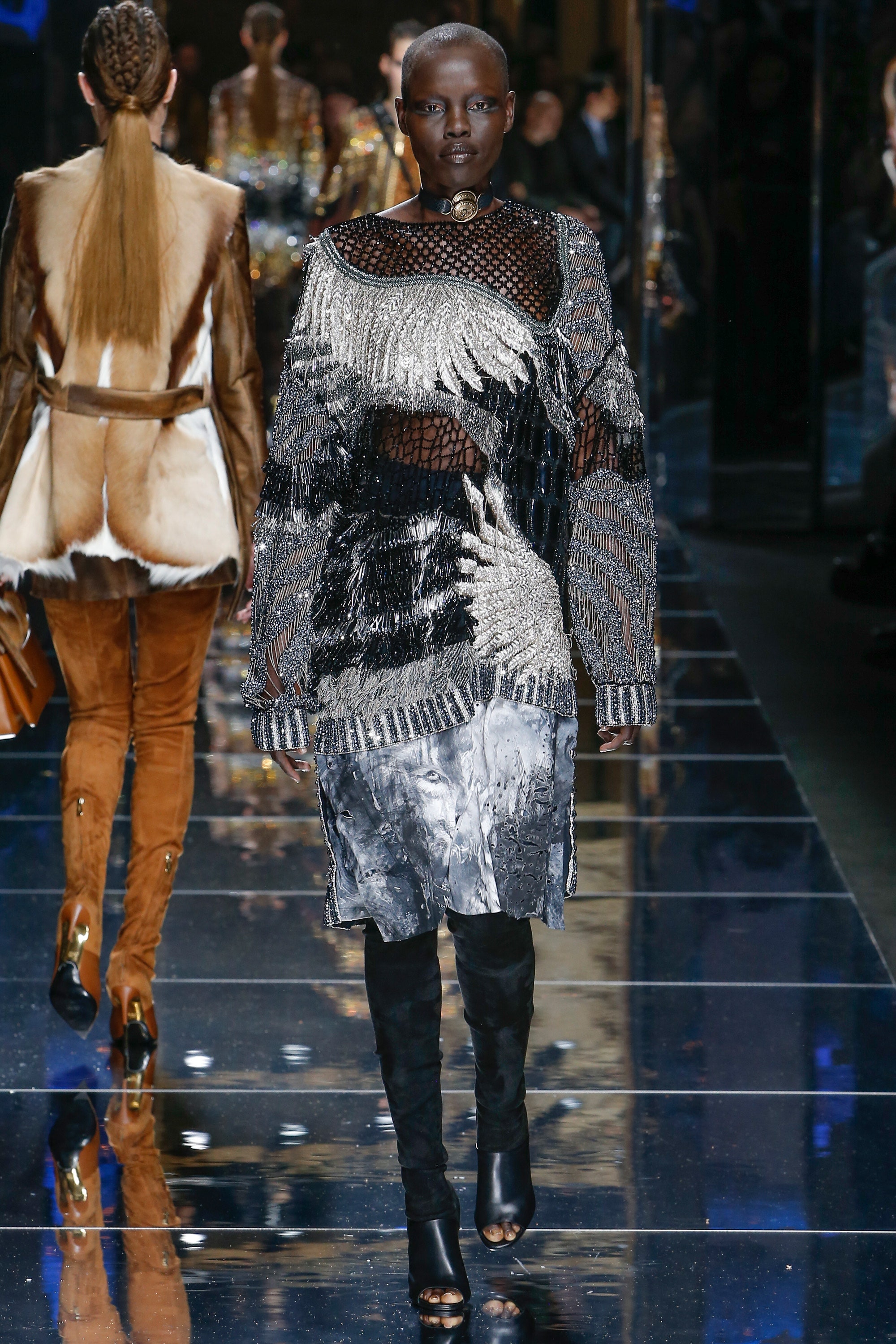 The gold-covered fierceness never ends. The ultimate may well be this gold-laden overlaid chain mail number that is crafted together in such as way as to provide added levels of texture and gives the appearance of one having been freshly dipped in gold and dramatically walking away with the molten liquid dripping in its wake. 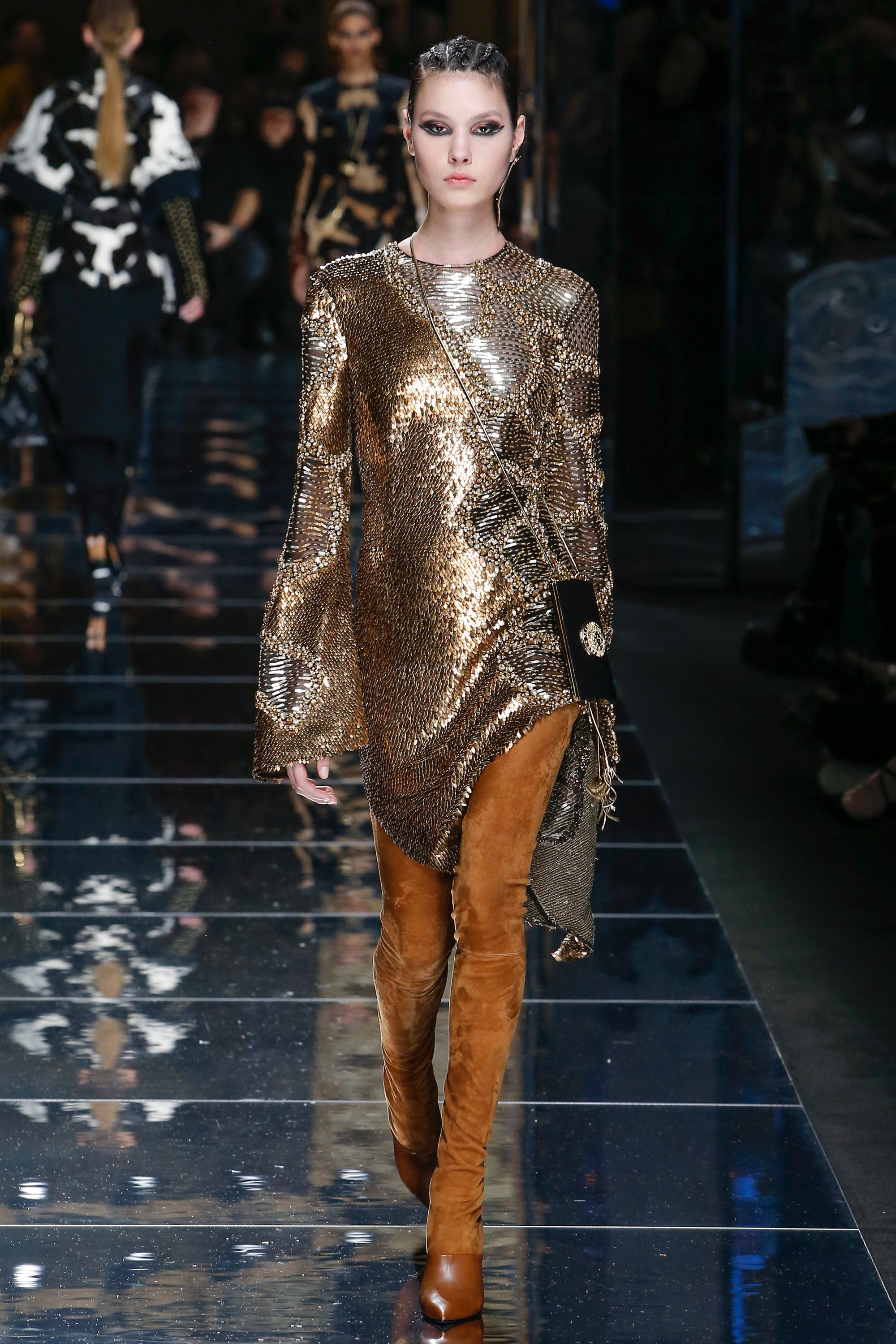 The deeper we get into the collection, the more the looks take on that of a warrior out looking to conquer her foe or even a score. The familiar cuts across the body are there, ramping up the level of sexuality. Even his use of sheer is more fierce than what we typically see from his collections. The fringe dripping off this piece looks electric and alive as it moves, giving one the appearance of wearing a garment that is alive with power. 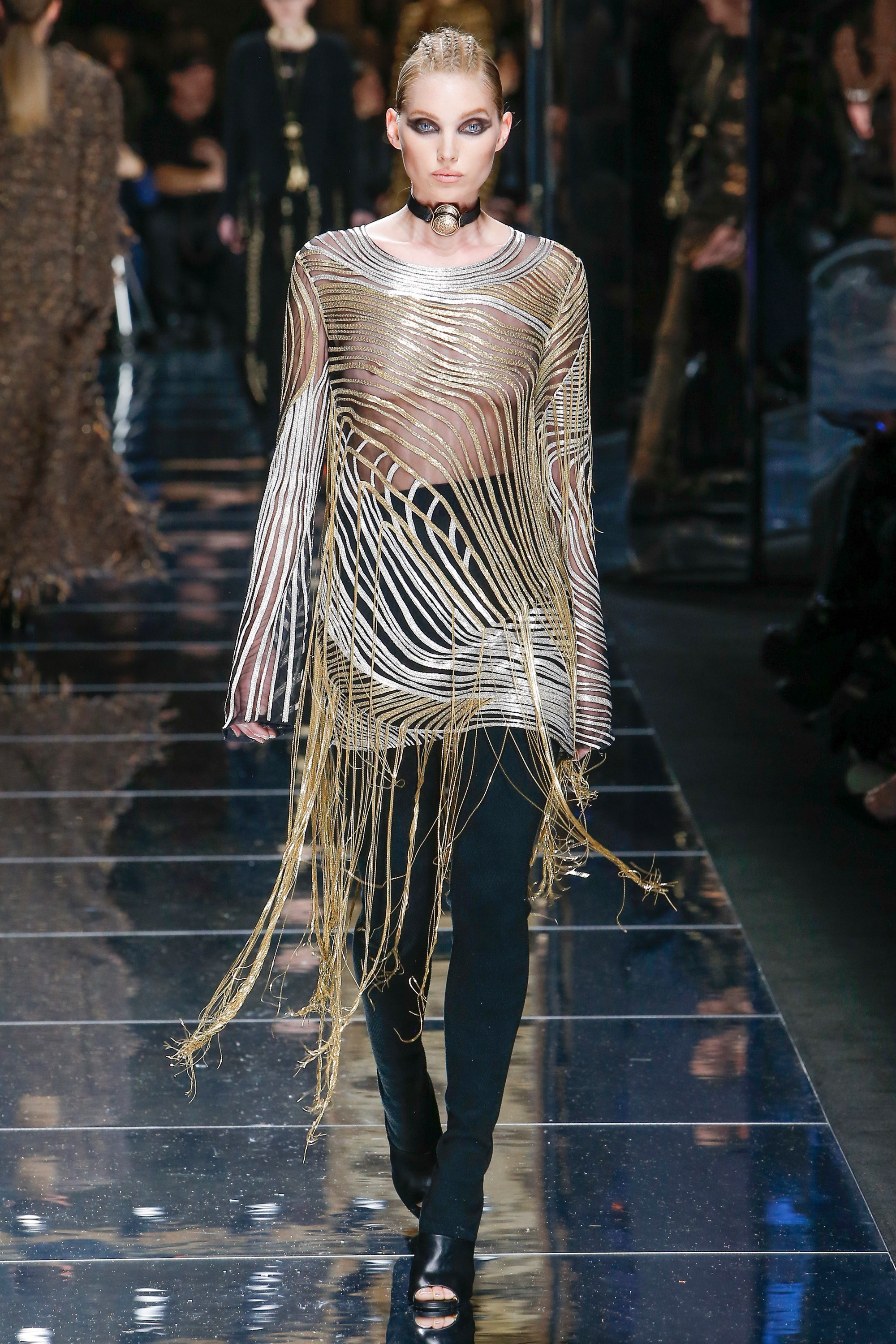 By the time we get to the end of this collection, these warrior princesses dressed in sliced and twisted leather look quite capable of removing an opponent’s head with just the swipe of a well-manicured fingernail. They incite fear and desire at the same time, making one unsure whether to approach or flee. 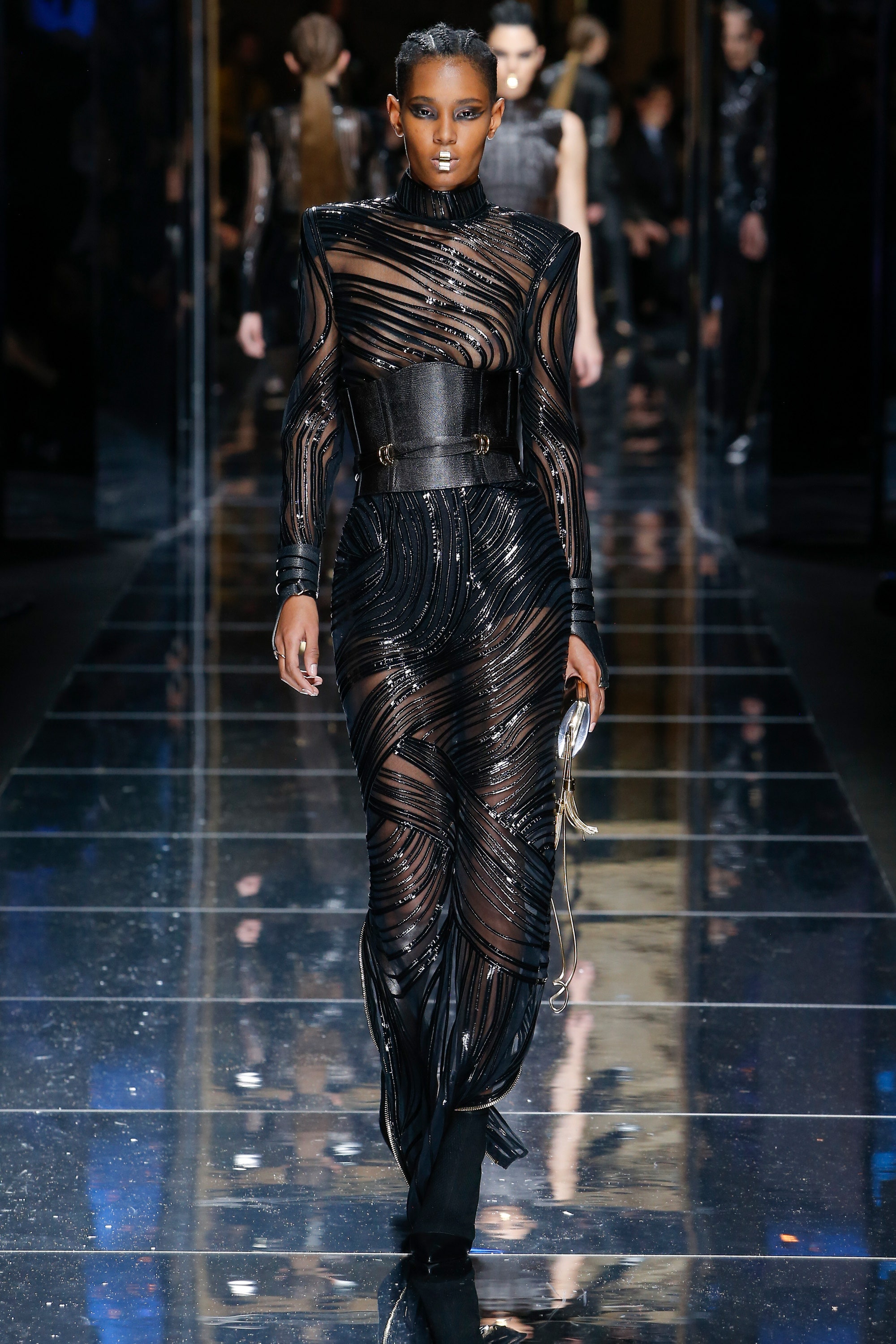 Olivier Rousteing isn’t afraid and neither are the strong, powerful women who wear his clothes. It would seem that the question is not whether you want these incredible pieces. Rather, the queston is: are you worthy enough to wear them?