No one dared say anything before the show. After all, Kate Spade sold her namesake brand to Tapestry in 2007. Still, everyone wondered. Would the label say anything or, given the circumstances, let the matter pass without comment. After all, a new creative director was showing her first collection today. Would it be rude to directly reference the founder?

Our answer came soon enough. Tucked in an envelope in front of the designer’s notes was a pink card that was succinct and appropriate for the occasion. It read:

she
left a little
sparkle
everywhere
she went.

Kate Spade’s suicide this past June rocked the entire fashion community. We all know and appreciate the stress designers face and most insiders are well aware of how many designers are currently being treated for depression and anxiety—and how many more should be. While she had not been a direct part of the label carrying her name for over ten years, Kate had been active in the fashion community and was rumored to be working on a new label. While no one expected or wanted a eulogy, to not say anything at all would have been awkward. The card was a nice touch.

Then came Nicola Glass, Kate Spade NY’s new creative director. The room was full of questions. Would she maintain the popular house esthetics or would she immediately charge forward in a new direction? There were reasonable arguments to be made in both directions. Last season’s rudderless showing demonstrated that the label cannot depend on simple modifications of its archives. At the same time, the brand has a significant following that is extremely loyal, especially to the silhouettes Kate developed. Glass seemed to be walking into a no-win situation.

Nicola Glass is a very demure, soft-spoken individual. By soft-spoken, I mean one has to often lean in to hear what she’s saying, especially if there is any background noise at all. She has taken that characteristic and applied it to Kate Spade aesthetics by doing things such as muting colors, reworking the interlocking spade design on handbags, and other quiet little touches that are noticeable, yes, but not shocking in any way.

Vintage still rules here and this collection feels like a mashup of the ’40s and ’70s silhouettes with a trendy twist of cropped knits and pants with a broader leg. To some degree, one wonders if Glass intentionally created certain pieces specifically because she knew they would look good on Instagram. She expertly walks that line between retro and hip.

Glass also brings back headscarves and it’s worth noting that she’s not the only designer to do so in this still-young spring/summer season. Every look coming down Tom Ford’s runway Wednesday night had a neutral colored scarf. Glass played with hers a bit more, going from a bandana motif to floral patterns reminiscent of what my own mother once wore. Scarves were as much as practicality as they were a fashion statement in the years prior to more natural hairstyles of the 80s and beyond. Highly coiffed styles involving a lot of hairspray could be undone in a wind. Scarves were employed to prevent such a disaster. Seeing the scarves come back could be the start of an interesting trend.

Glass said before the show: “I didn’t want to come from a very thematic approach with the collection; it was looking at some of those key foundations of the color, the silhouette, but in a way that we wanted to make feel very modern and not vintage-y in any way. I really wanted this feeling of lightness and fluidity with the clothing as well, so going back to that easiness to wear and also having a little bit of tension where, yes, there’s feminine details, but there also — whether it’s a bit of an element of cool or something that feels sophisticated — there’s also a youthful spirit to it as well.”

Set against a very pink background in the New York Public Library, the collection is small at 20 pieces, but large in the statement it makes about the brand’s future. Here are a few samples from the collection: 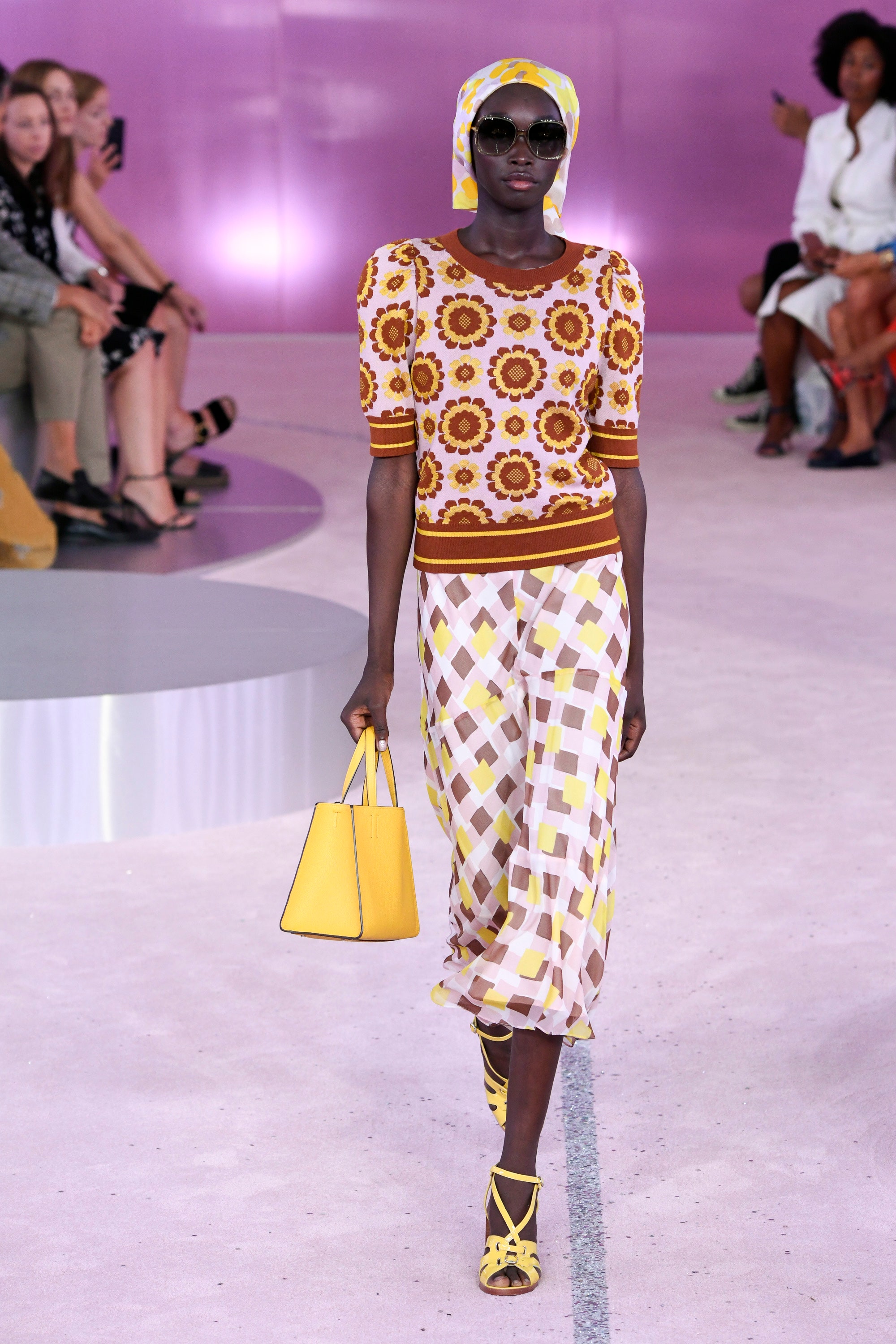 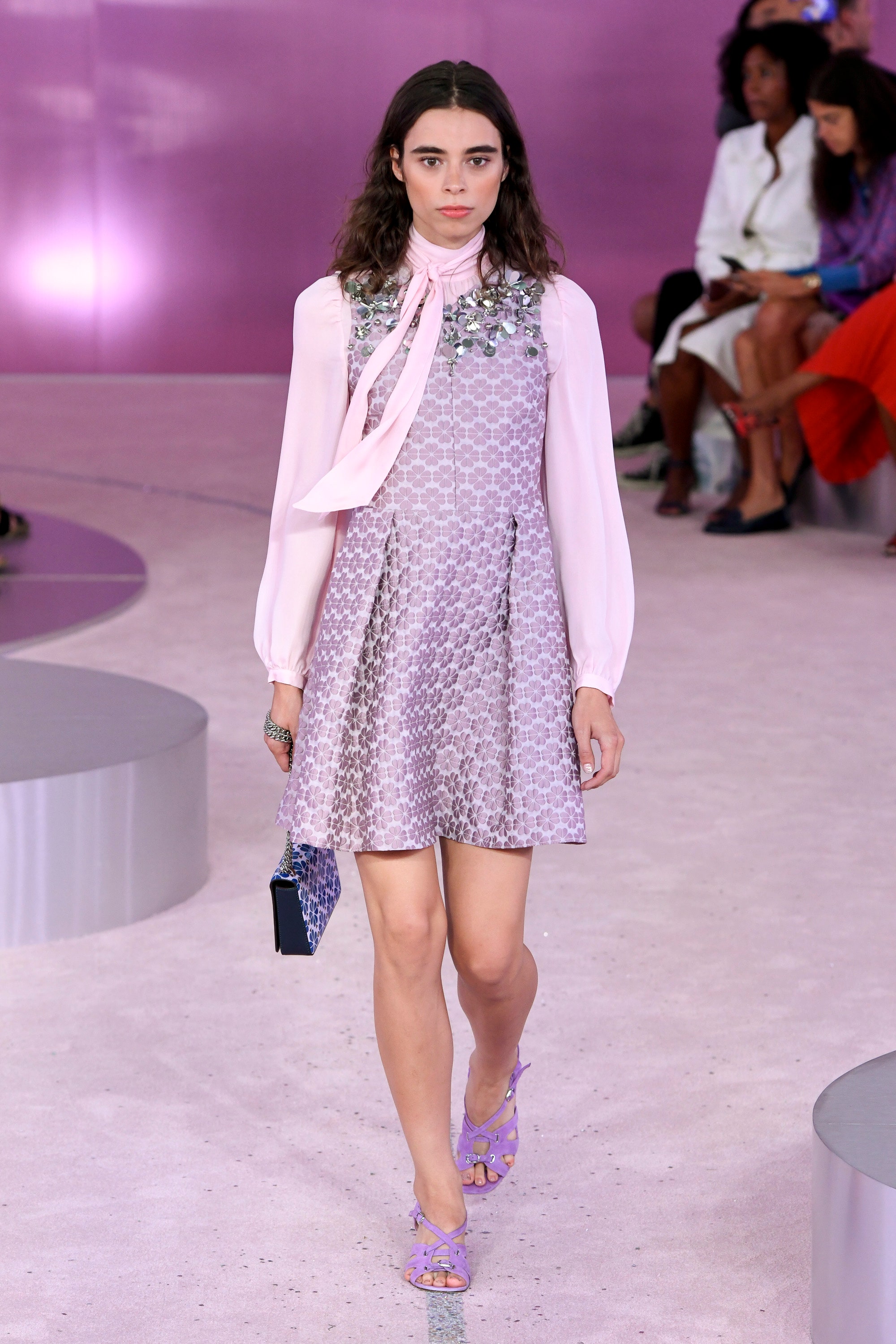 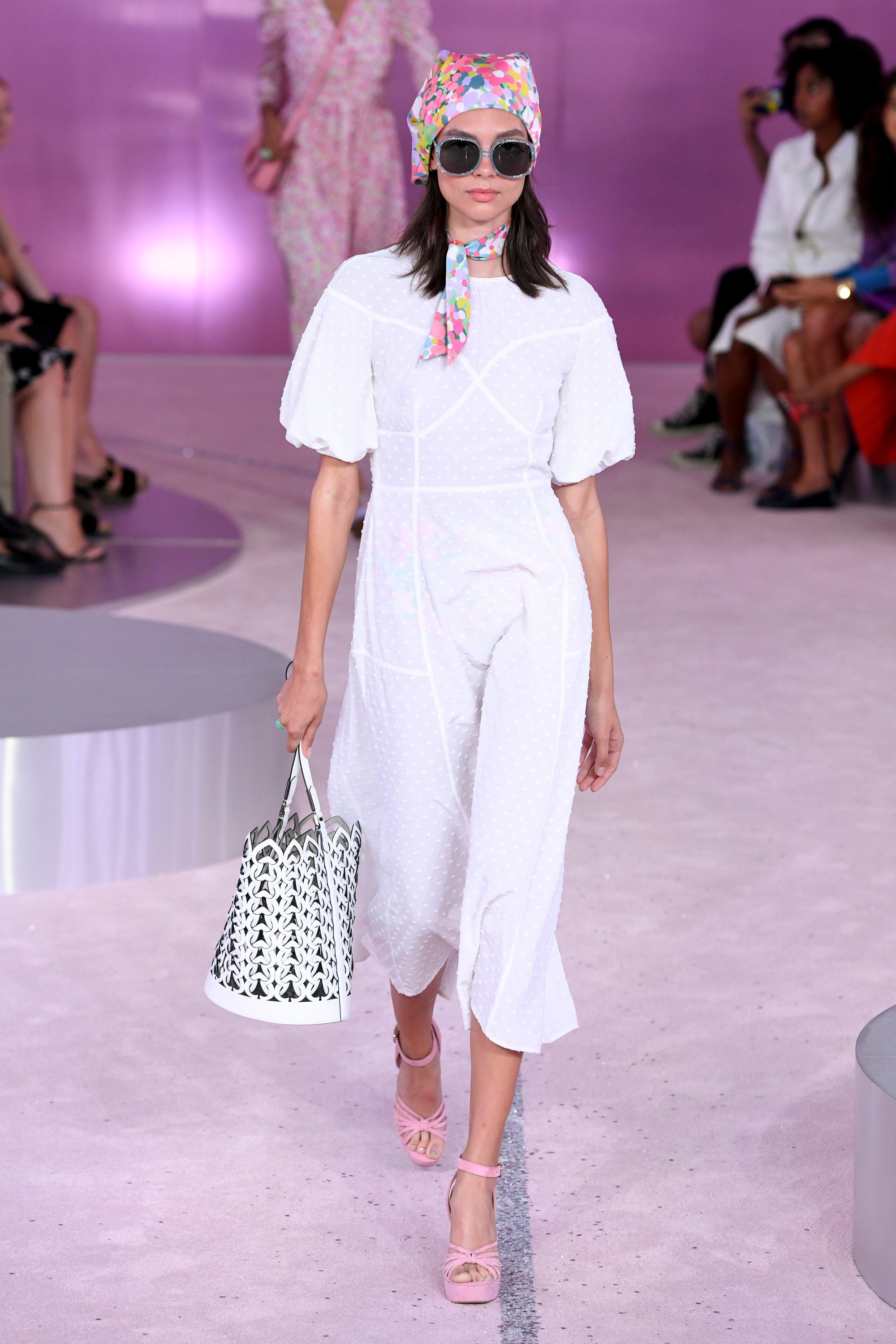 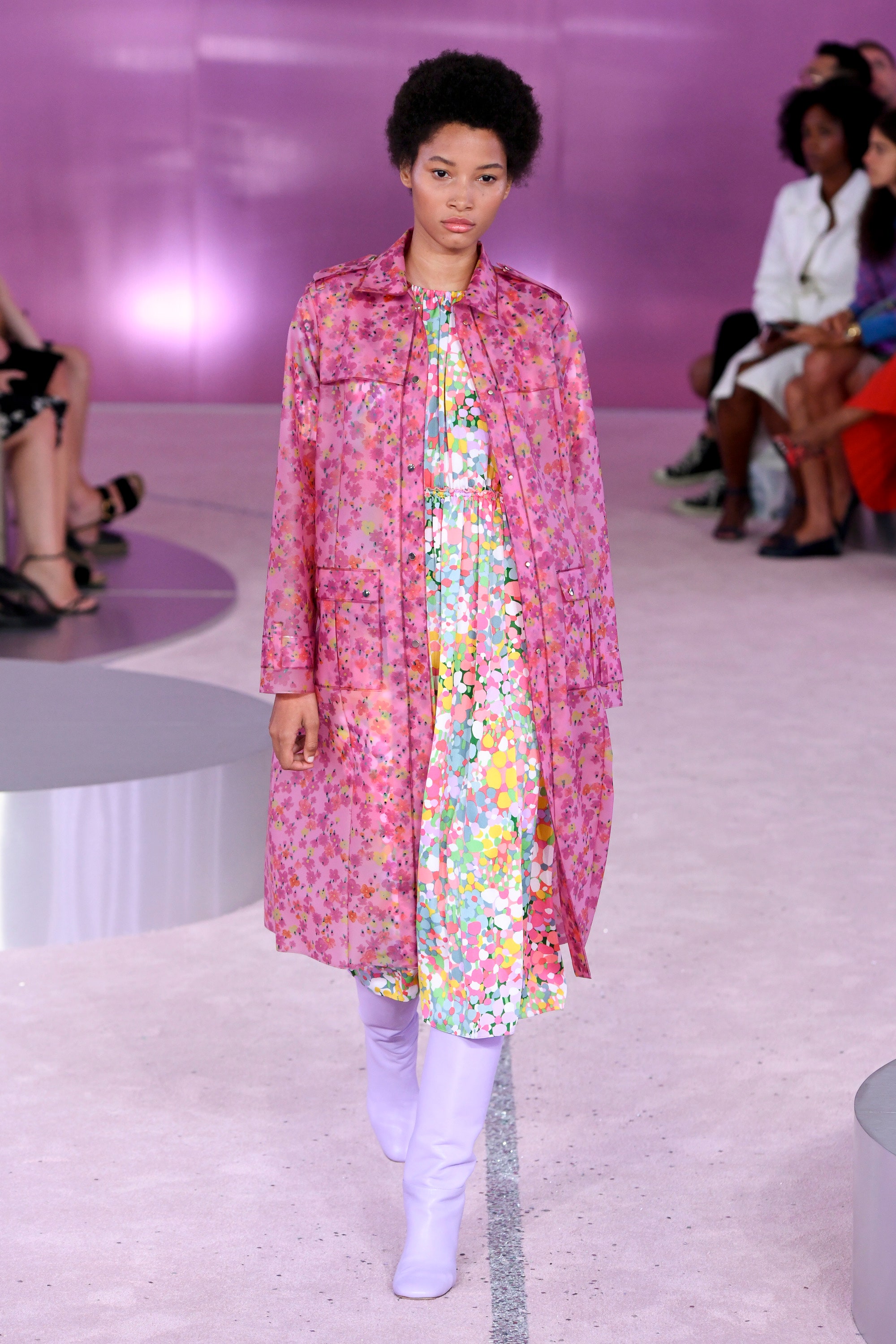 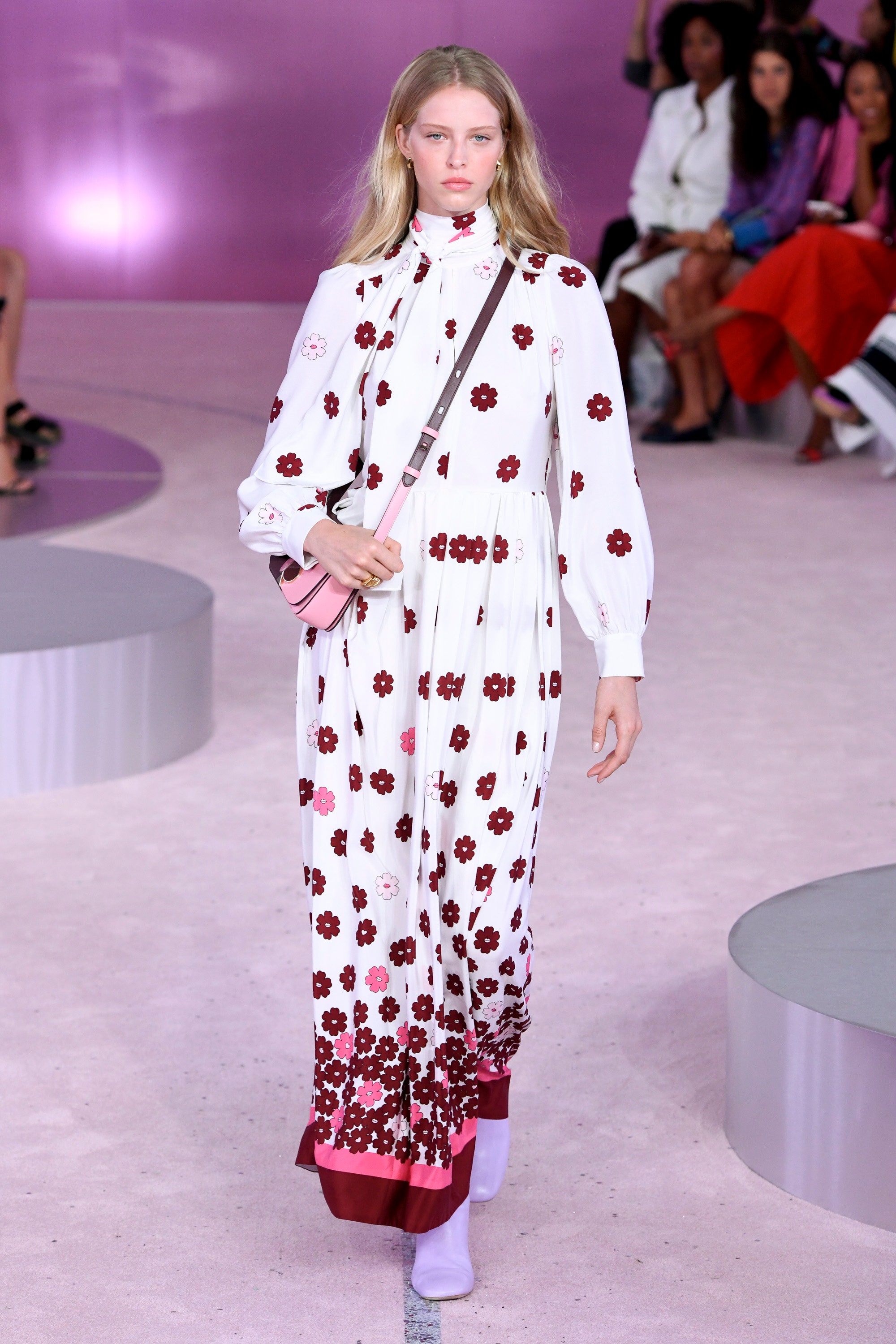 Today was likely an important day in the history of Kate Spade NY. Having appropriately mourned the passing of their founder, the brand now turns a corner, with a positive attitude and a clear sense of direction. Yes, we are going to continue to see changes in and around the label. Glass is already playing with the interlocking spade logo. The next few seasons could be very exciting.