Traditionally, Sunday is typically the closest thing NYFW week has to a “dead” day. Shows start a bit later and the names are typically not as well known. This season is different, though, and the entire schedule is full of “dead” holes where little-known and emerging designers are showing but big names are absent. For this Saturday, the entire day might be considered one of those holes.

The advantage to the absence of big names in the schedule is that it gives us a chance to see what new and lesser-known designers are doing. One never knows when the rookie showing in some out-of-the-way spot is going to burst onto the scene with the next big hit.

At the same time, not every designer who shows in New York, or anywhere else, is worth writing about. There have been more yawns this season than any I can remember in recent history. Editors who have an obligation to fill a certain amount of space are struggling to find things to say about the many collections that, to put it nicely, are uninspiring.

One of the few bright spots in Saturday’s schedule is Adeam, a Japanese label designed by Hanako Maeda. Ms. Maeda’s collection is interesting in that she beautifully merges both East and West cultures into clothes easily wearable just about anywhere on the planet. As a result, she delivers an aesthetic that is unique.

I was initially concerned that we were going to see yet another 90’s-influenced throwback similar to what we saw far too frequently back in February. The show was set in what had formerly been the Tunnel nightclub, a bastion of 90s naughtiness. There were lasers and moving lights all over the place and I was all set to give the collection a big thumbs down.

What came down the runway was not what I expected, though. Maeda avoids the worst cliches of the 90s such as the huge hair and the big shoulder pads. While she does give in to large bows and puffy balloon sleeves, she does so in a way that actually flows with the design (imagine that) rather than against it, which is what we often see.

One surprising element is Maeda’s clever use of PVC. We see it several places throughout the collection, such as a corset over an off-the-shoulder blouse, or interestingly worked into a trenchcoat. To write about it sounds rather offputting, but the reality is that the technique is attractively different and exciting.

Speaking of trenchcoats, what the pictures don’t show is the incredible lacking she does on the back of these pieces. That element alone is enough to warrant searching stores for these coats.

Maeda also does some really cool work with pink denim, of all things. Seeing that in the fabrics list had me ready for a disaster but she again goes off the shoulder (something she does frequently in this collection), balloons the sleeves just the right amount, and adds small bows along the side. The result is very impressive. 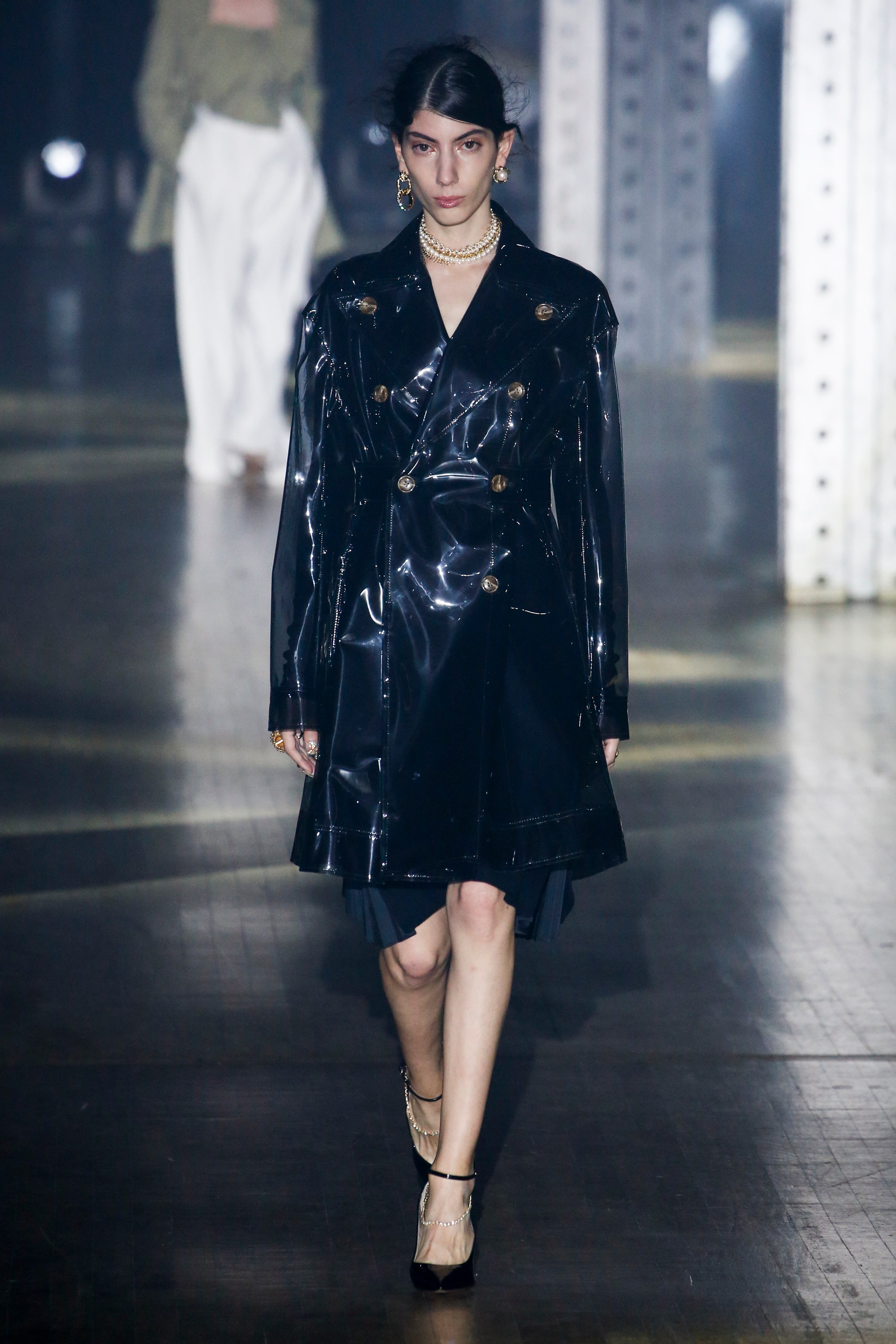 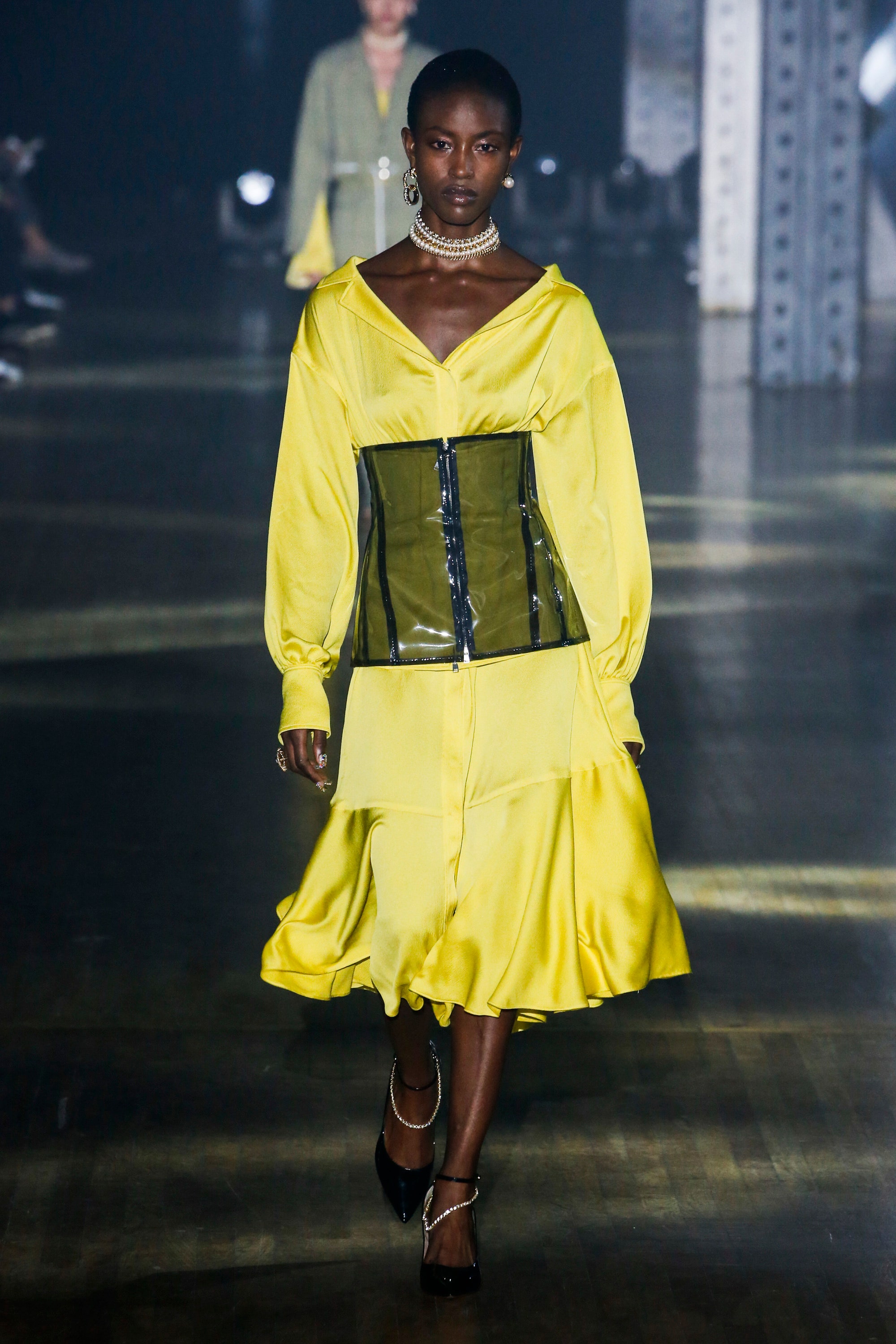 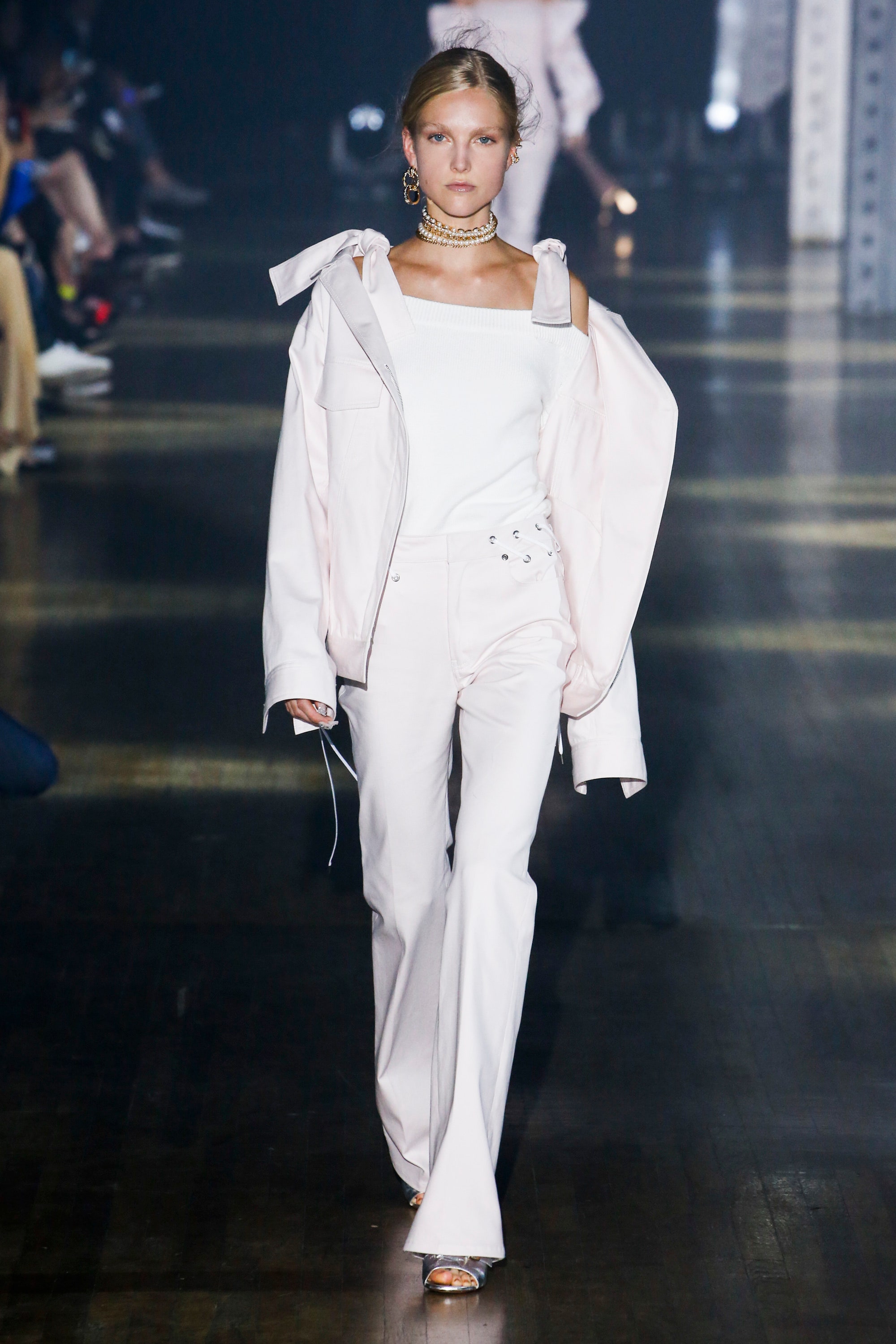 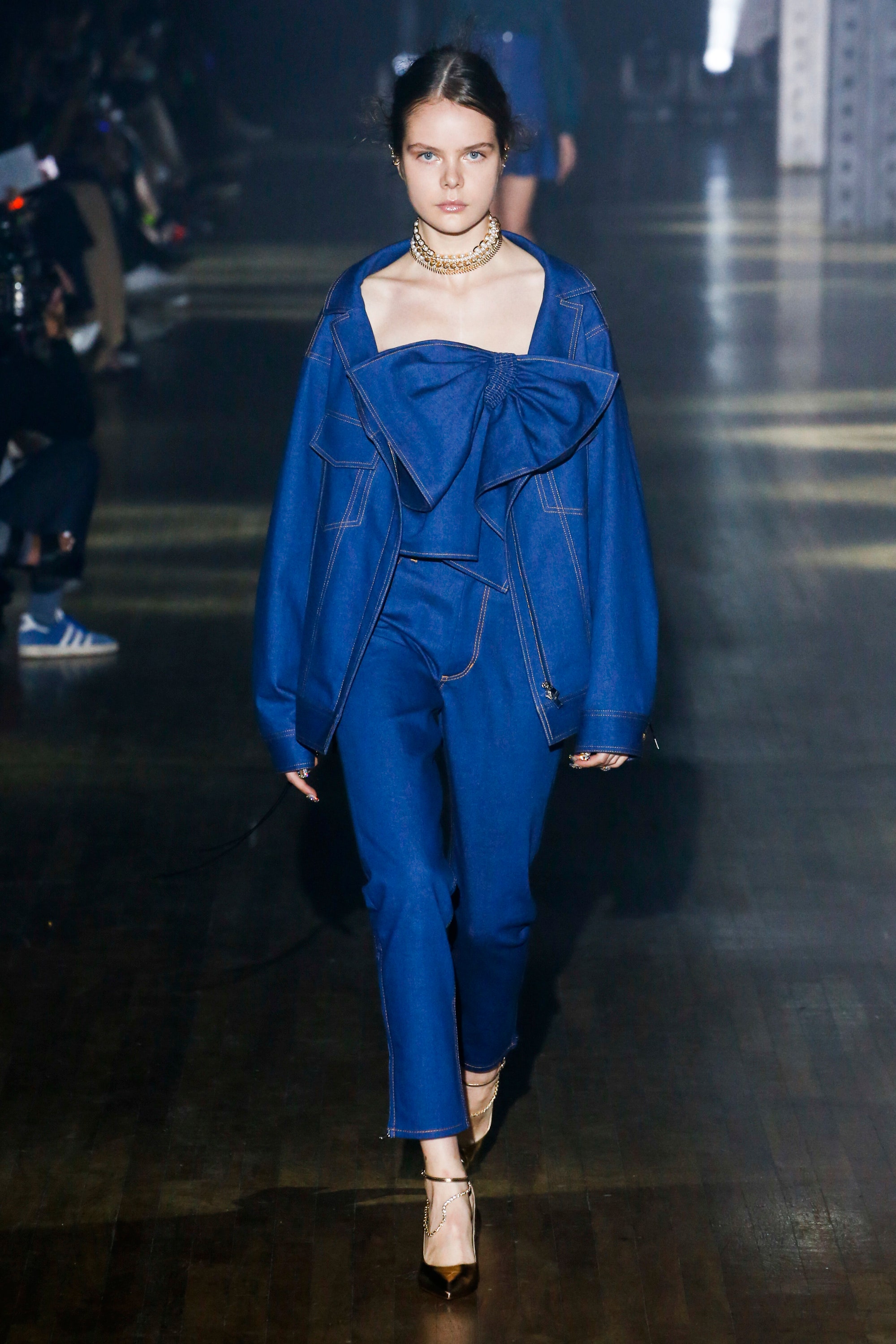 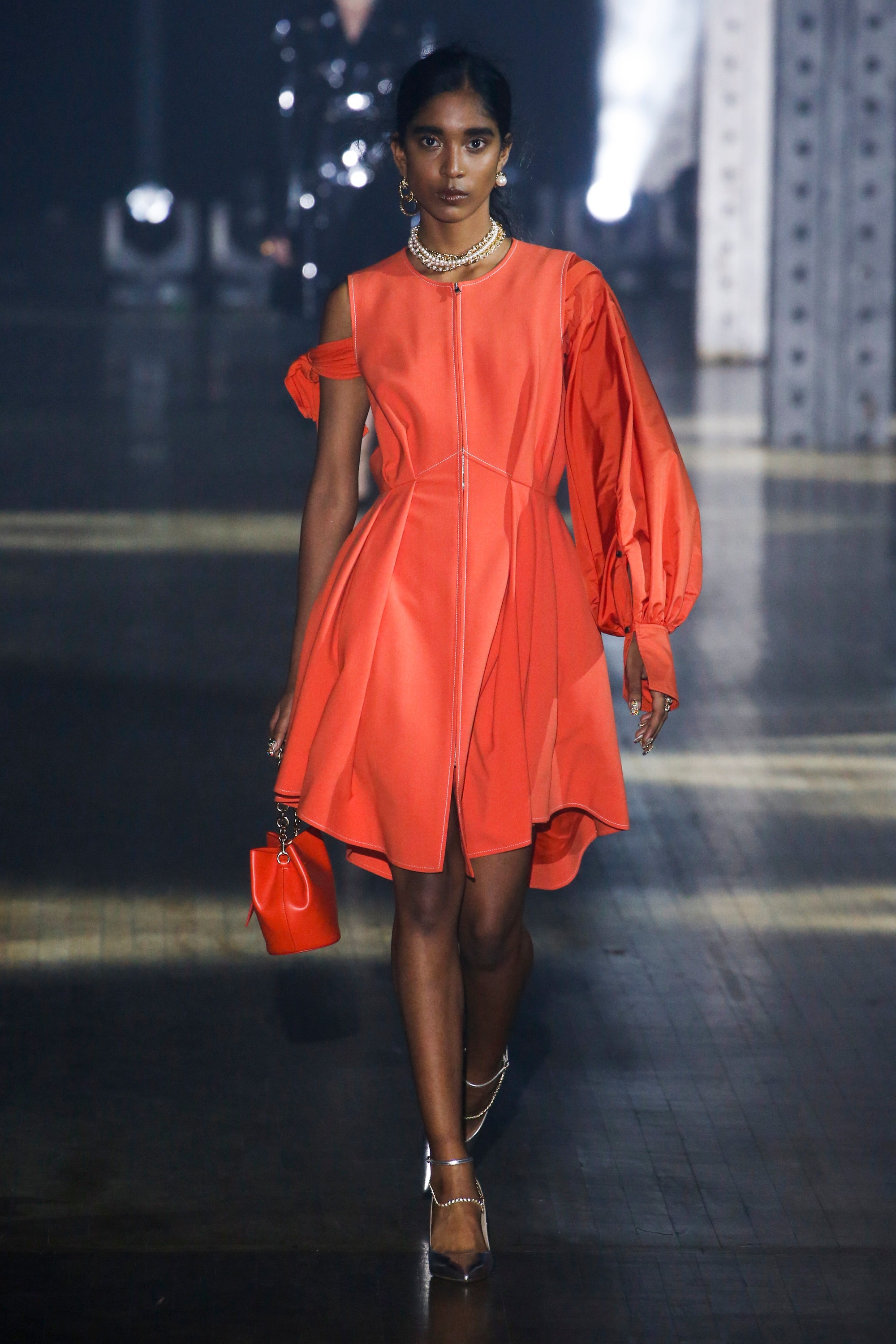 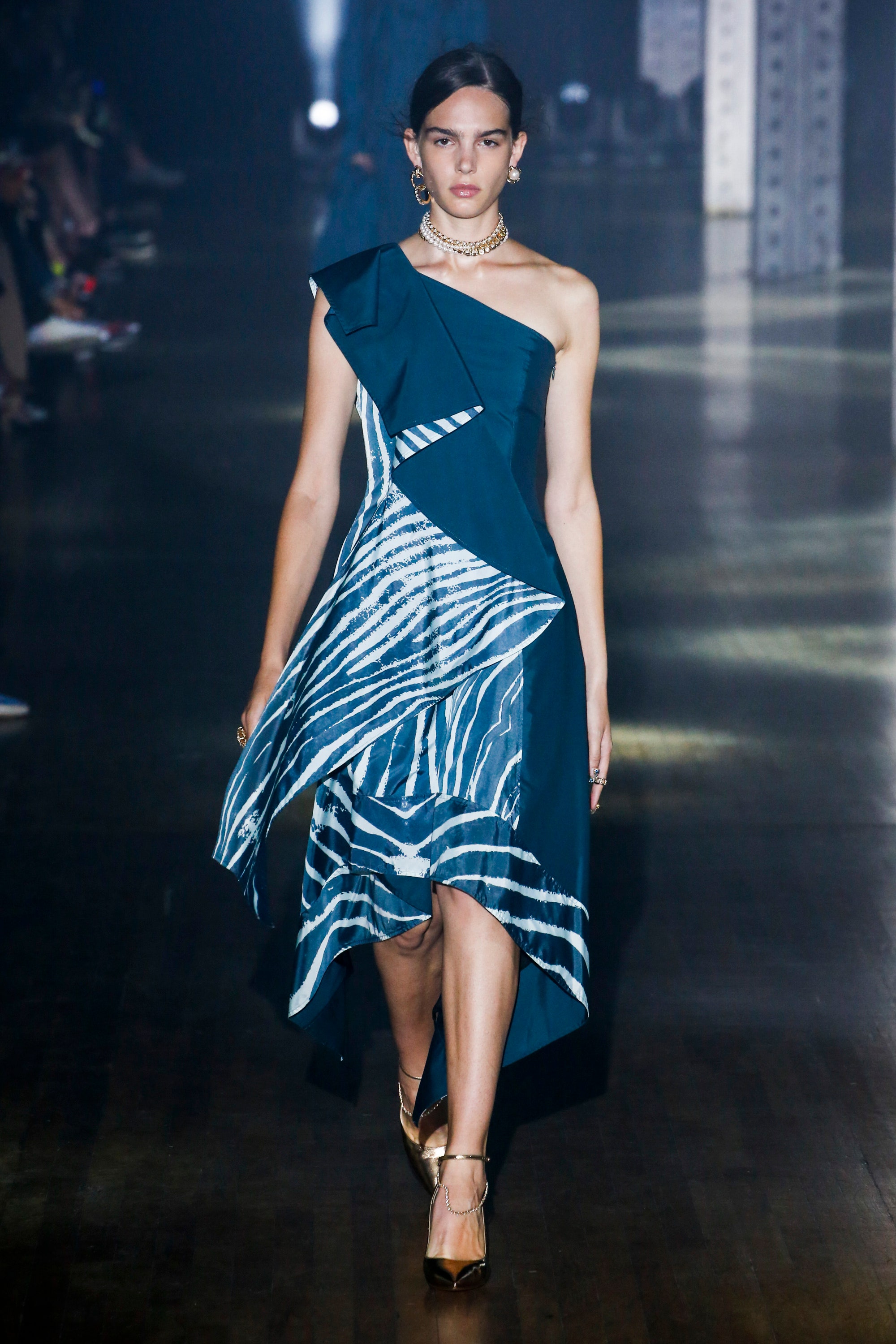 Adeam is one of those labels that is going to look good on a person. One doesn’t need to be a size 2 or have the perfect accessories handy to make the ensemble complete. These are well-designed, well-tailored, and beautifully finished clothes. Add this to the list of must-watch designers. Hanako Maeda could be very big the next time we look.