“I always say, if you want to go out at night naked you should be able to. It’s part of the individual freedom.”

Such was the manner of strangely delicious statements from Miuccia Prada prior to her Autumn/Winter ’18 show. She elaborated a bit:  “The other night, at my age, I walked a bit and I felt insecure, so I can imagine a young girl who wants to go out [dressed] sexy, why not? Probably she feels insecure.”

Okay, so this is a collection of strength, empowerment, not only being free to be who you are but feeling safe in doing so, right? Well, uhm …

“[This show is my] little revenge on the art world, occupying the art space,” the designer added.

Ms. Prada is frustrated that the art world doesn’t take the fashion world seriously. That might explain the comical neon signs outside the tower that is the newest addition to the company’s Milan headquarters. The flaming shoe, is that the Prada design the devil allegedly wears? And what might that neon monkey represent? The show hadn’t started and already it was getting strange.

Hold on, one more curve. When discussing the challenge of infusing social issues onto the runway, Miuccia said this collection addresses, “ … how to combine the horizons of our thoughts with the reality of our job,”

Which of us hasn’t been there at some point? That certainly explains the new Prada logos attached to many of the pieces in this collection, though I would have also accepted the art argument as well. The logo is part sporty, part tech-inferring, and altogether the opposite side of the design spectrum from the company’s traditional serif-based logo.

Prada collections are open to wide interpretation by their very nature. We depend on Miuccia’s explanations to provide some sense of focus. Otherwise, no one would have a clue what she is trying to say or do in any particular season. If ever there was a fashion label that should come with notes it’s Prada. Yet, this season, even the notes weren’t enough to prevent some serious head scratching and much of that started before anyone ever saw the first piece of clothing.

Four flights of stairs. At 8:00 in the evening, no one was wearing sensible shoes.

Not to body shame anyone, but have you seen the majority of fashion editors? With a few notable exceptions, this isn’t a group of people who spend much time in a gym. Some with whom I’m most familiar get the majority of their exercise walking back and forth to the tray of danishes that seems to magically refill itself in their offices. Ask them to walk four flights of stairs for anything short of saving their own lives and they’re not likely to be happy. By the time everyone reached the fourth floor, a bad mood had settled in like a thunderstorm brewing over the Texas plains.

Oh, but then one stepped out of the stairwell onto a highly-polished black floor that presented the optical illusion of just dropping off into nothingness. That seemed to weird out anyone who wasn’t already exhausted by the climb. I heard one writer who’s typically quite careful with her language cursing vehemently as the floor triggered a sense of vertigo. The evening was not getting off to a good start.

Eventually, clothes did come down the runway and when they did they were led by Sudanese model Anok Yai, the first black model to lead a Prada runway since Naomi Campbell. One thing Prada seems to get right is inclusiveness and diversity on the runway, which tends to not happen so much in Milan. Nigerian model Eniola Abioro and Brazilian Eduarda Bretas were among the coast along with Chinese supermodels Liu Wen and Fei Fei Sun.

Clothes coming down that runway were an example of extreme layering. The ensembles at times felt like utilitarian work uniforms in a universe where wisps of tulle and bows and corsets naturally pair with Pocono-nylon padded rainwear and boots with drawstring leg coverings and, correct me if I mistook this one, open-toed socks? Tweeds were matched with the reflective neon vests one sees construction workers wearing. Then, there were the corporate ID cards, complete with the model’s photo, attached high along where a lapel might be if any of the outfits actually had a lapel. Many of the looks seemed to be trying to merge a hazmat aesthetic with a feminine silhouette, or, perhaps, the other way around.

This would probably be a good point to share some examples from the collection: 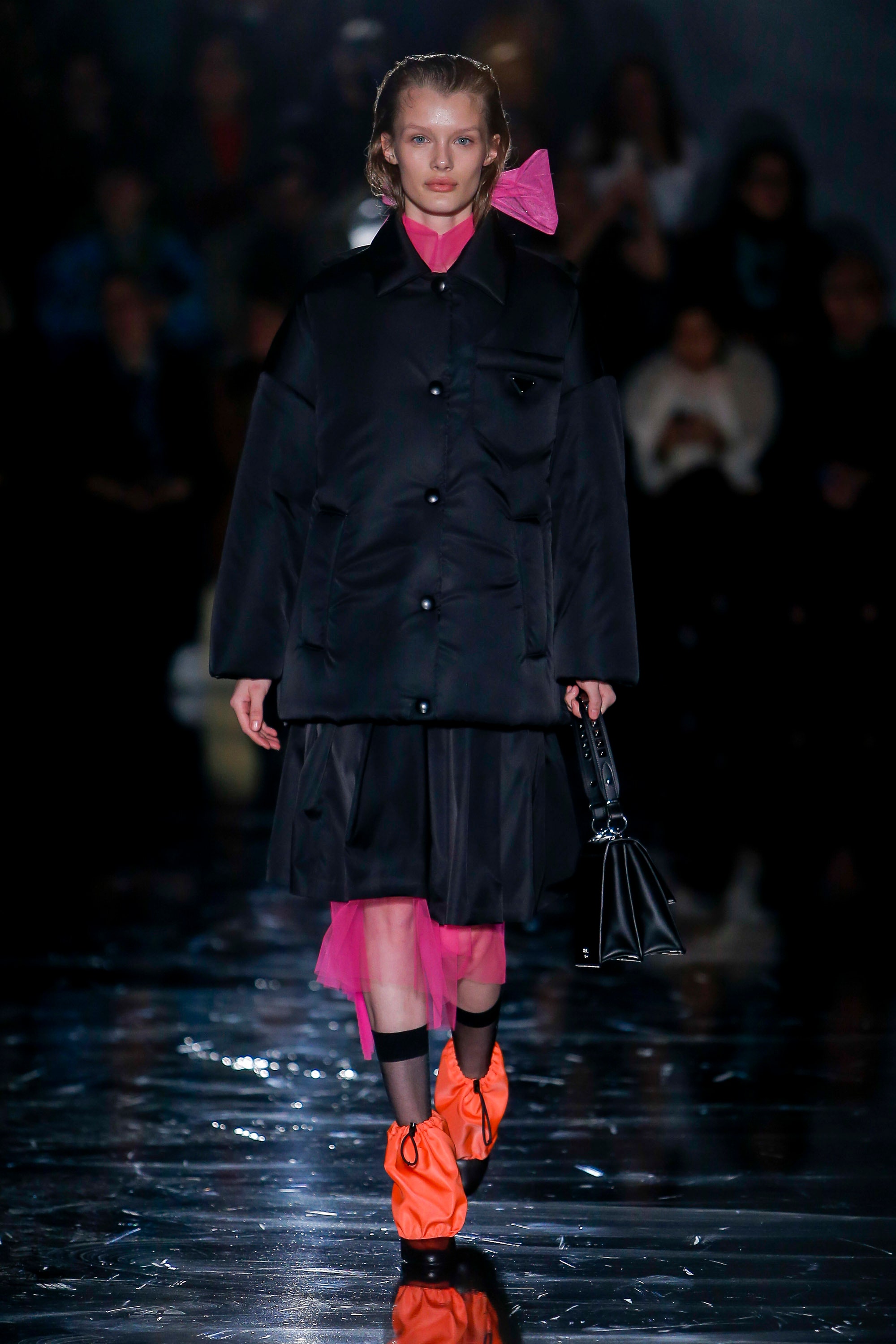 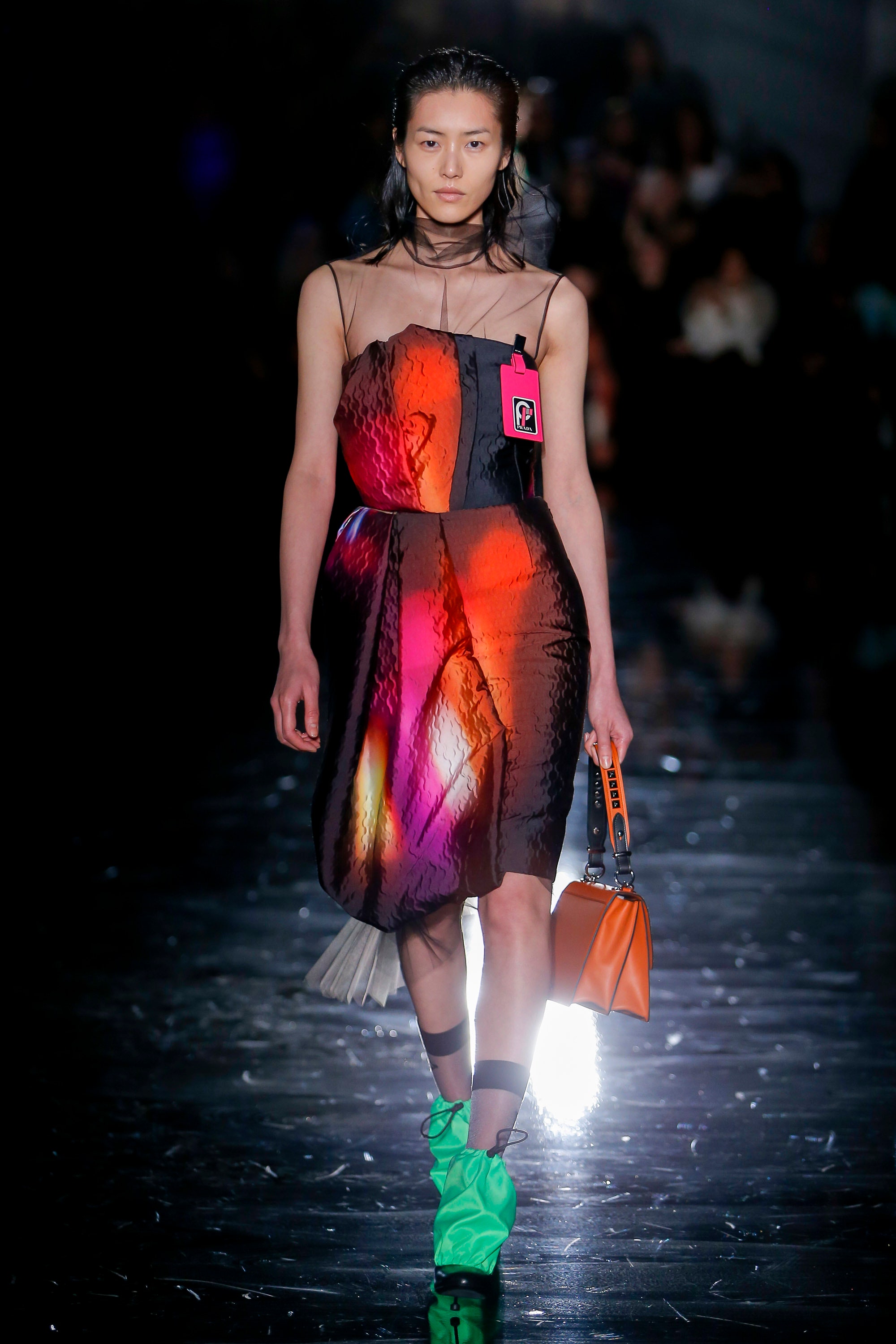 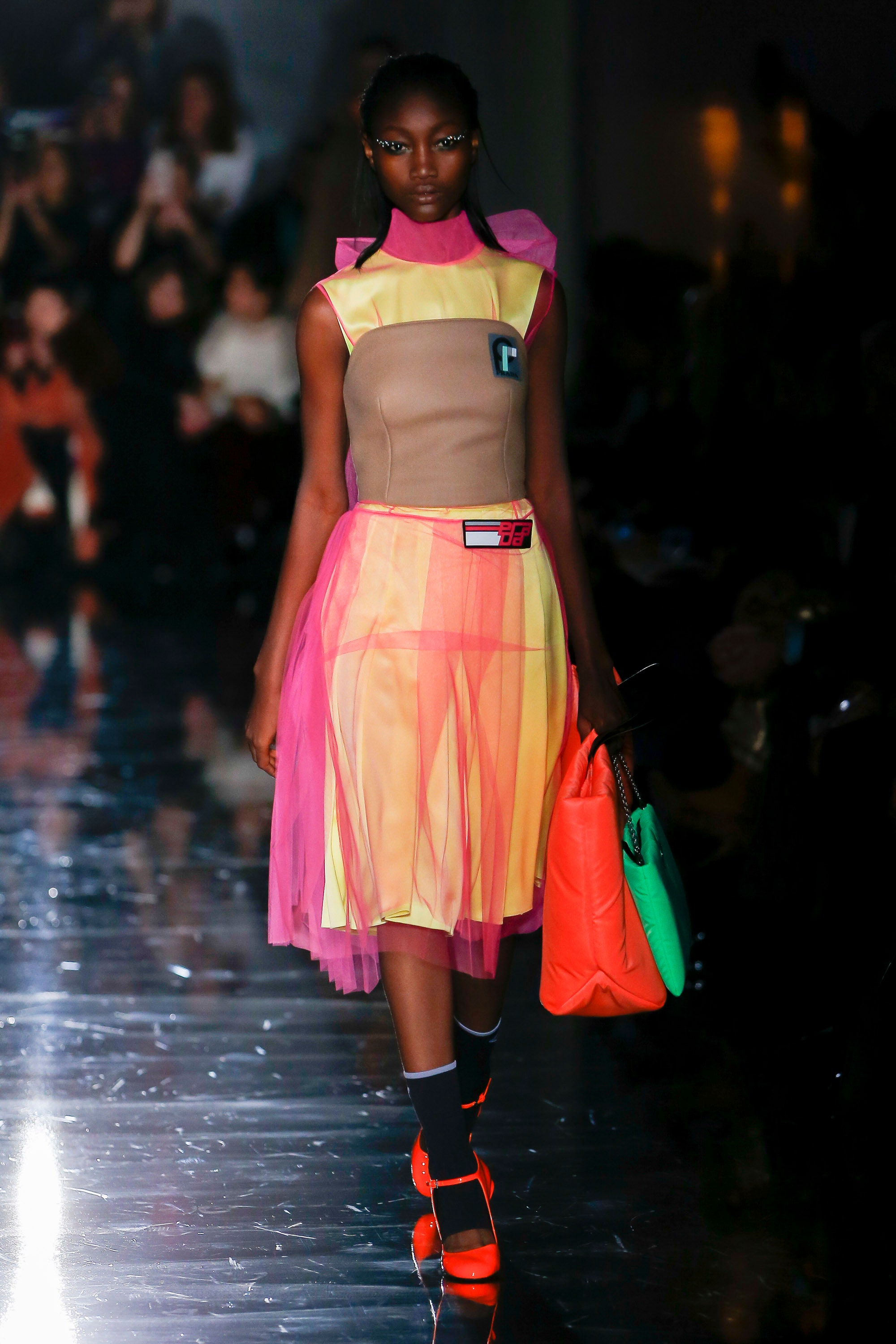 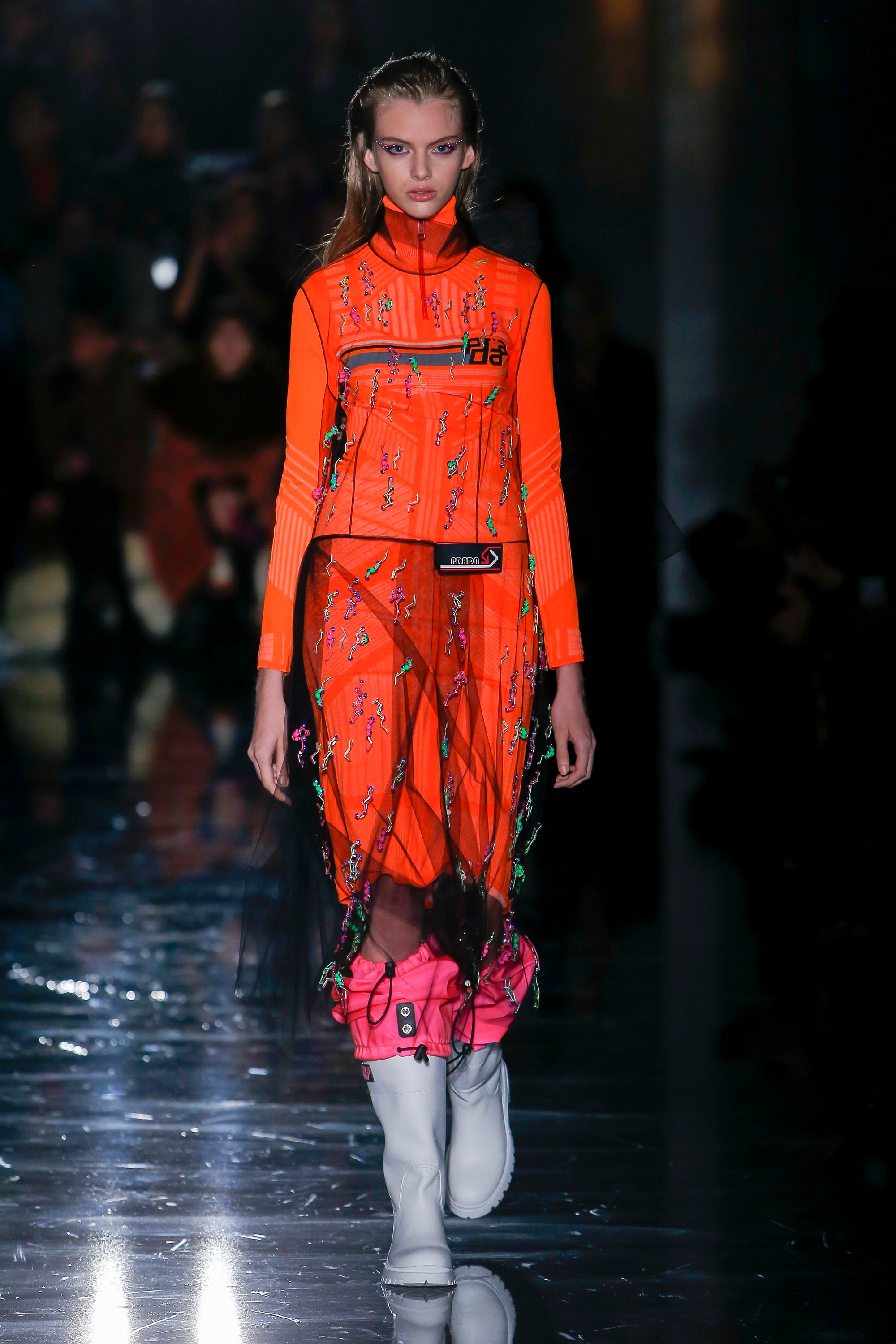 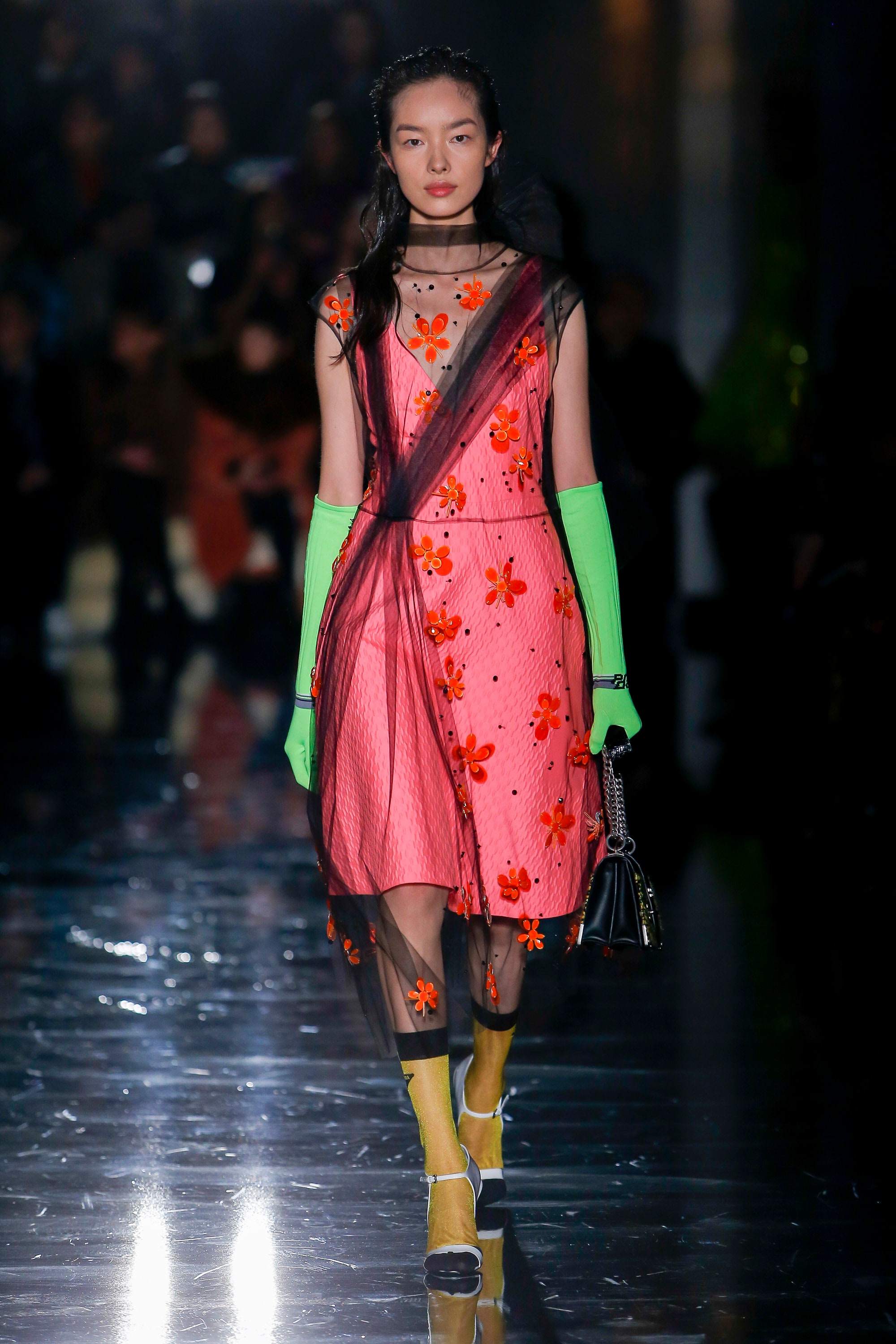 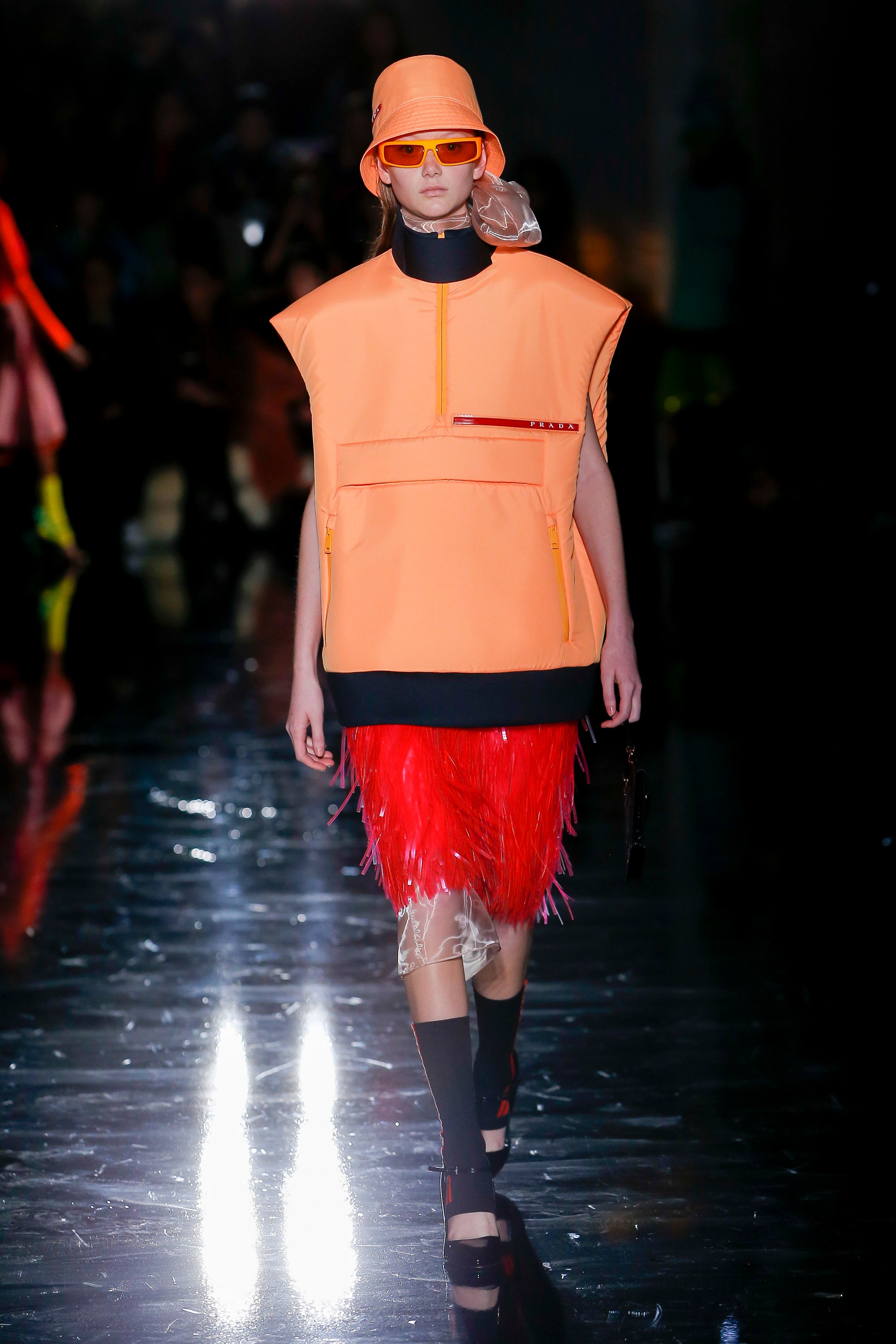 While Ms. Prada’s creativity is as ramped up as ever, a primary area of disappointment comes in her selection of almost exclusively man-made and wholly unsustainable fabrics. Given that discarded clothing is the world’s second-largest landfill contributor, such an approach is not acceptable. We expect more from Miuccia. If she’s going to be so sensitive to other points of her fashion line, sustainability has to factor strongly in her calculations as well.

Neither can we overlook the fact that Prada, as a company, is still struggling. While other Italian brands have seen a strong resurgence, Prada has lagged behind and continues to flirt with bankruptcy. While we appreciate the incredibly creativeness and artistry of what Miuccia is doing, if people don’t buy the clothing then to what end does the clothing exist? Is this line destined to be nothing more than an extensive museum collection?

While fashion insiders are generally magnanimous in their attitudes toward Prada, there was a lot of grumbling this season and it wasn’t entirely because of having to take the stairs. We need Prada to be creative and original but at the same time, we need it to be at least marginally commercial so the brand can stay alive. I’m not sure this is the collection that begins that turn around. We’ll hope for something a little closer to relateable next season.