Milan comes to a close with a mild but satisfying end. There were some highlights along the way, but there were some obvious absences as well and the new faces didn’t necessarily impress as was hoped. Italian fashion has suffered no small amount since last September. The mood here has been cautious at best and in some instances outright defiant. Now, as clouds arrive in front of rain due this evening, all the editors and press board planes or boats or trains for the short (relatively) trip to Paris. There are no hard feelings for Milan, but everyone is hoping the city has reason to be in a better mood when we return.

Going into this morning’s Giorgio Armani show, the only major show left here for this season, I was curious whether we would continue to see some of the same classic styling that we saw earlier this week with the Emporio line. With all the business-oriented shifts being made within the company, it would be surprising if the master designer chose now as the time to unveil anything startling.

What we got was something carefully between new and classic. The silhouettes were largely drawn from the house catalog, which is extensive enough to hold some surprises on its own. His choice of ways to apply those silhouettes, though, was contemporary and fresh, so it didn’t feel like a rehash of things we’ve seen before. There were a sufficient number of looks that were cautious, but at the same time, he gave the Armani woman some room to breathe and experiment as the situation may warrant.

Red checks start the collection, sometimes straight, other times turned on end for more of a diamond pattern. The print on chiffon is simple, not too large but avoiding the strain of being too small, either. The look is probably more visually satisfying, though, on jackets through three different inversions. Our favorite was the one below over black silk pants. The look is not only sharp, there’s a stronger sense of casual luxury than with the other choices.

I might as well go ahead and mention those hats right up front. Armani totally takes hairstyles out of the equation this season by putting a smaller, brim turned up, fedora on the head of almost every model walking. The only two models with no hat both had massive amounts of naturally curly hair that wouldn’t have even started to fit under one of these hats. The model below had the only hat that broke with the style seen on all the other models. For winter, and especially for women who color their hair, wearing a hat like this can keep hair from drying out in the cold air. However, one probably wants to keep some product in your purse for when you do remove the hat. 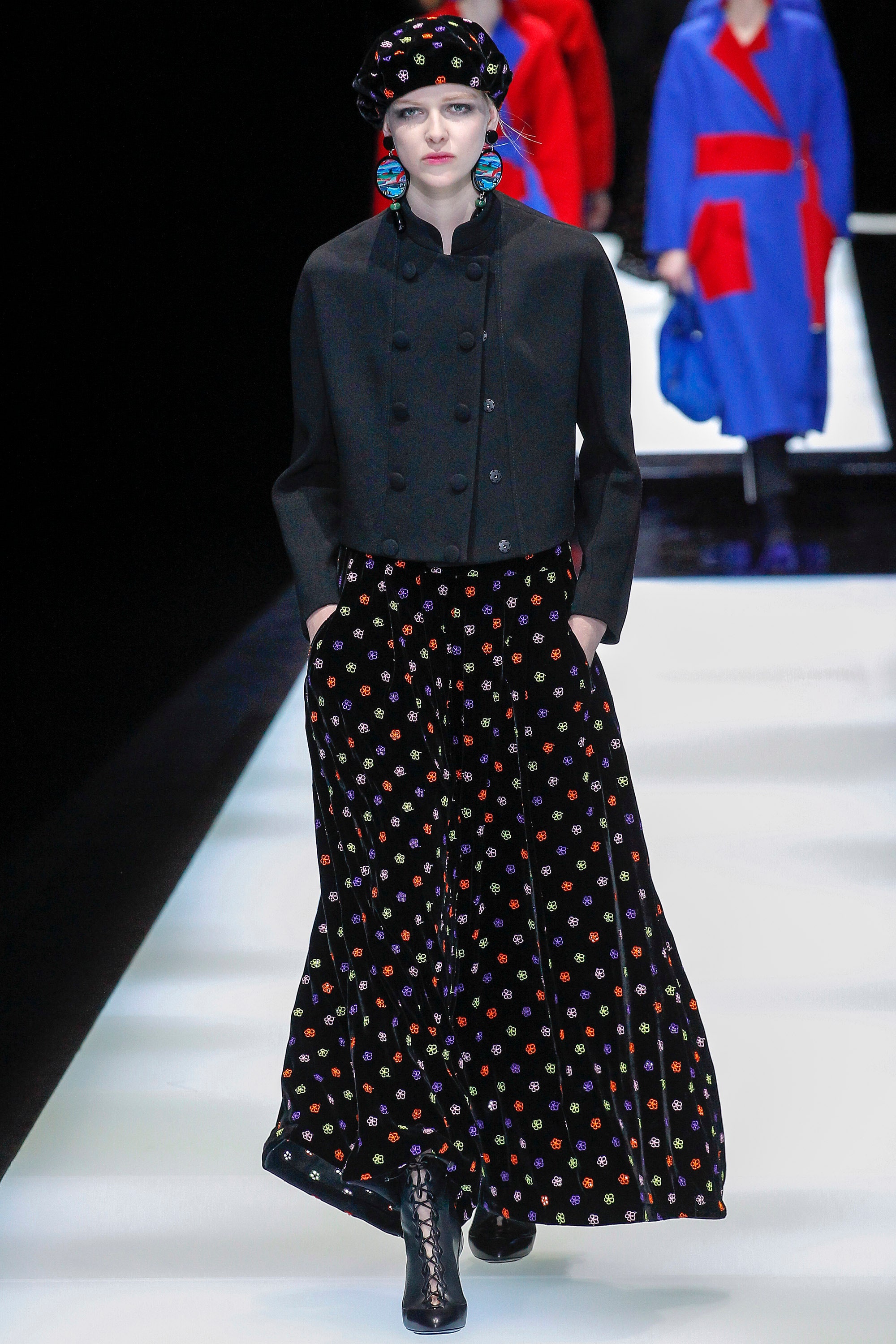 Giorgio has a thing for red this season, sometimes using it as an accent for all-black ensembles and at other times accenting the red with black. The combination is classically stunning and one that has been around for ages, which means the styles themselves have to work harder to stand out. He does this more than one, but the best is possibly this red jacket, cleverly style with the zipper partially open and the collar standing up to give the look a sense of mystery. The quilting isn’t over the top, contrary to what we’ve often seen this season, and the look with black silk slacks is lean and trim without the person wearing it having to actually be lean and trim herself. 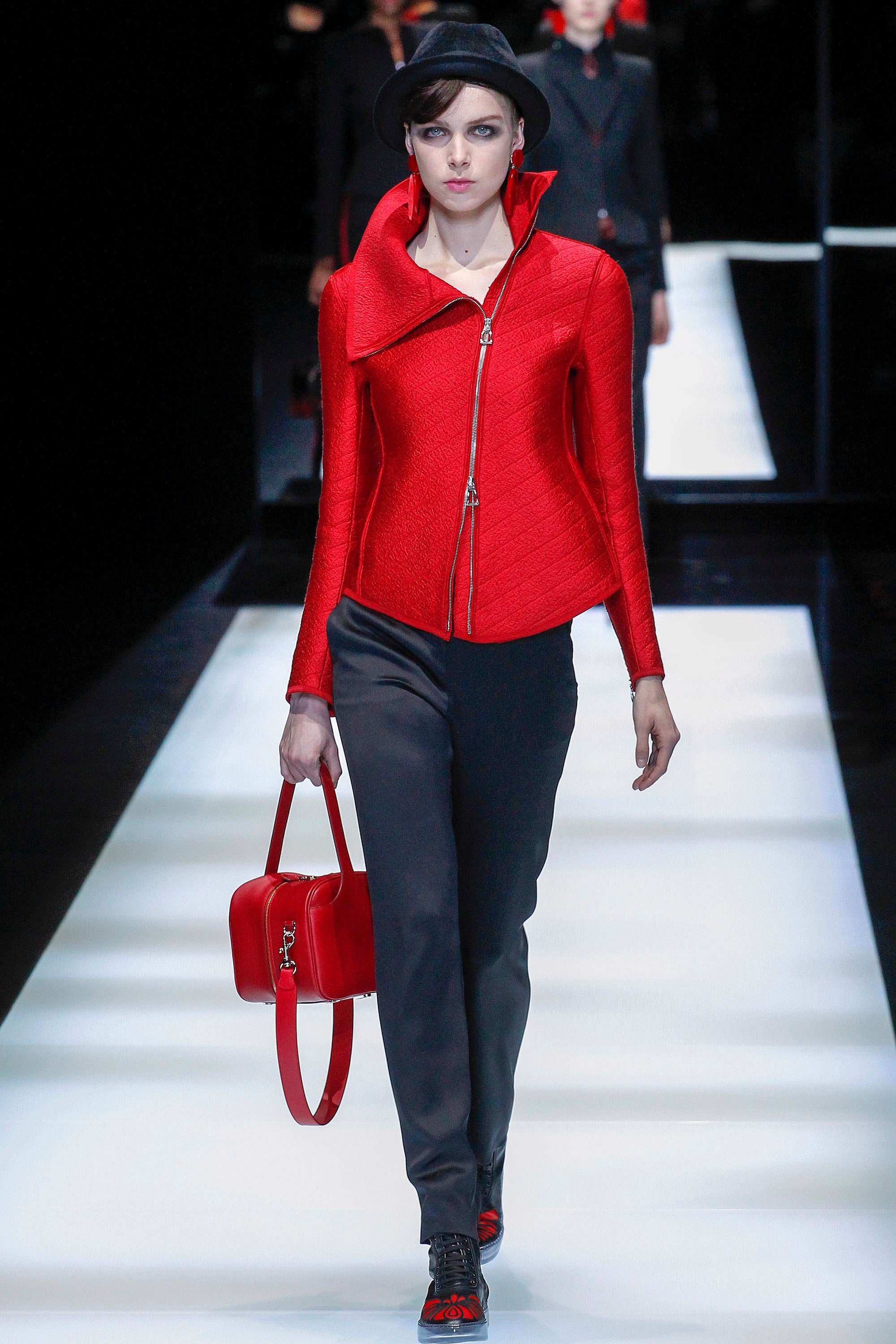 Red isn’t the only color Armani uses this season, though. As always, he has a thing for bright, basic colors. There is plenty of green and blue in the collection as well, and even a few random pieces of orange, as well. He noticeably stays away from the mustard yellow that several other designers have sent down the runway. One of the best uses of color comes in this lovely suit with a blue pleated chiffon blouse that comes right up under the chin in dramatic fashion. Paired with blue-tinted sunglasses and crushed velvet jacket and pants, the look is sharp and contemporary without having to put up with the cold. 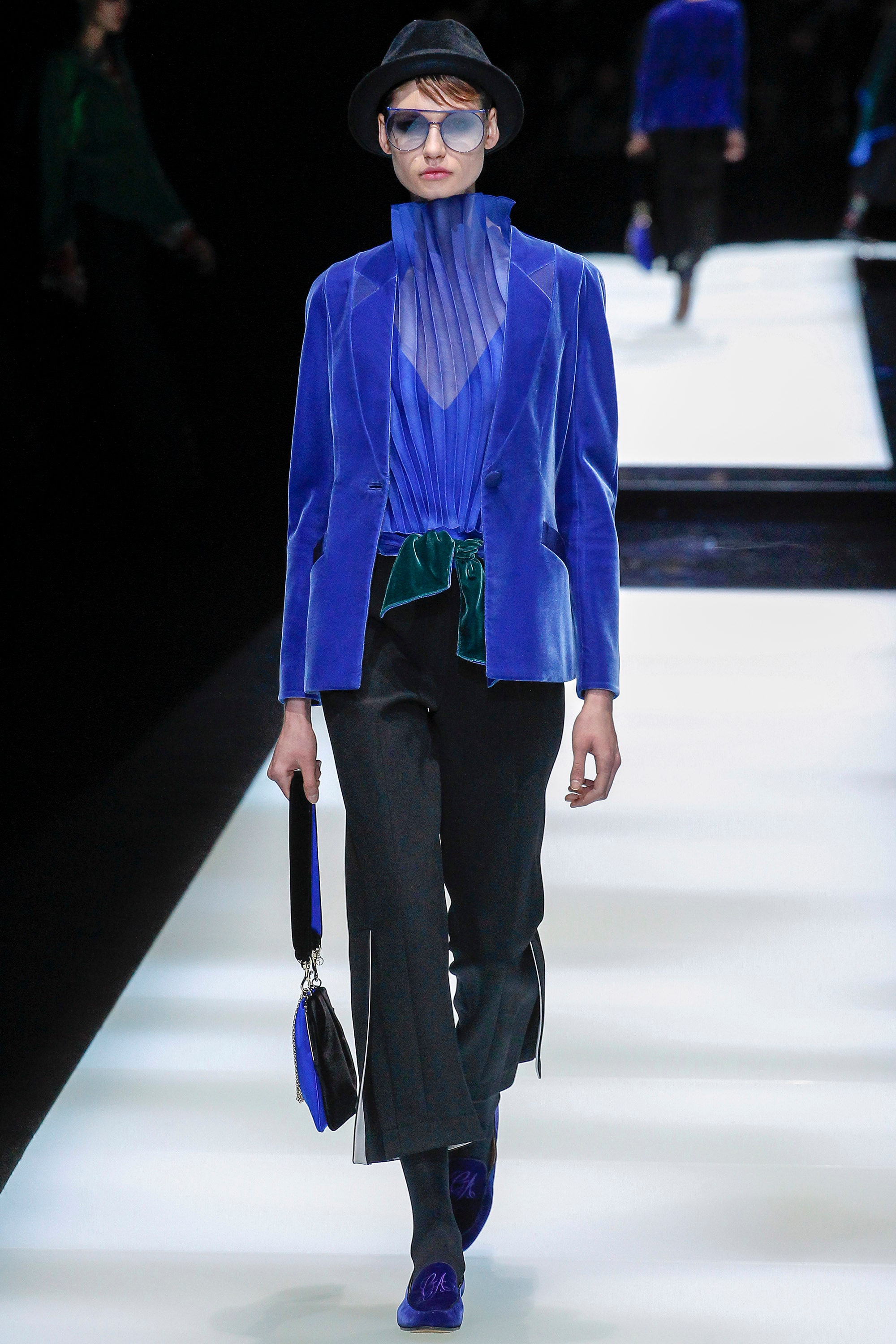 There are some wonderful multicolored prints in the second half of the collection, but again, most of the excitement is in the coats and jackets. The reflective metallic thread pattern he uses below is especially bright under lights and is going to look great if one takes some time and goes outside. 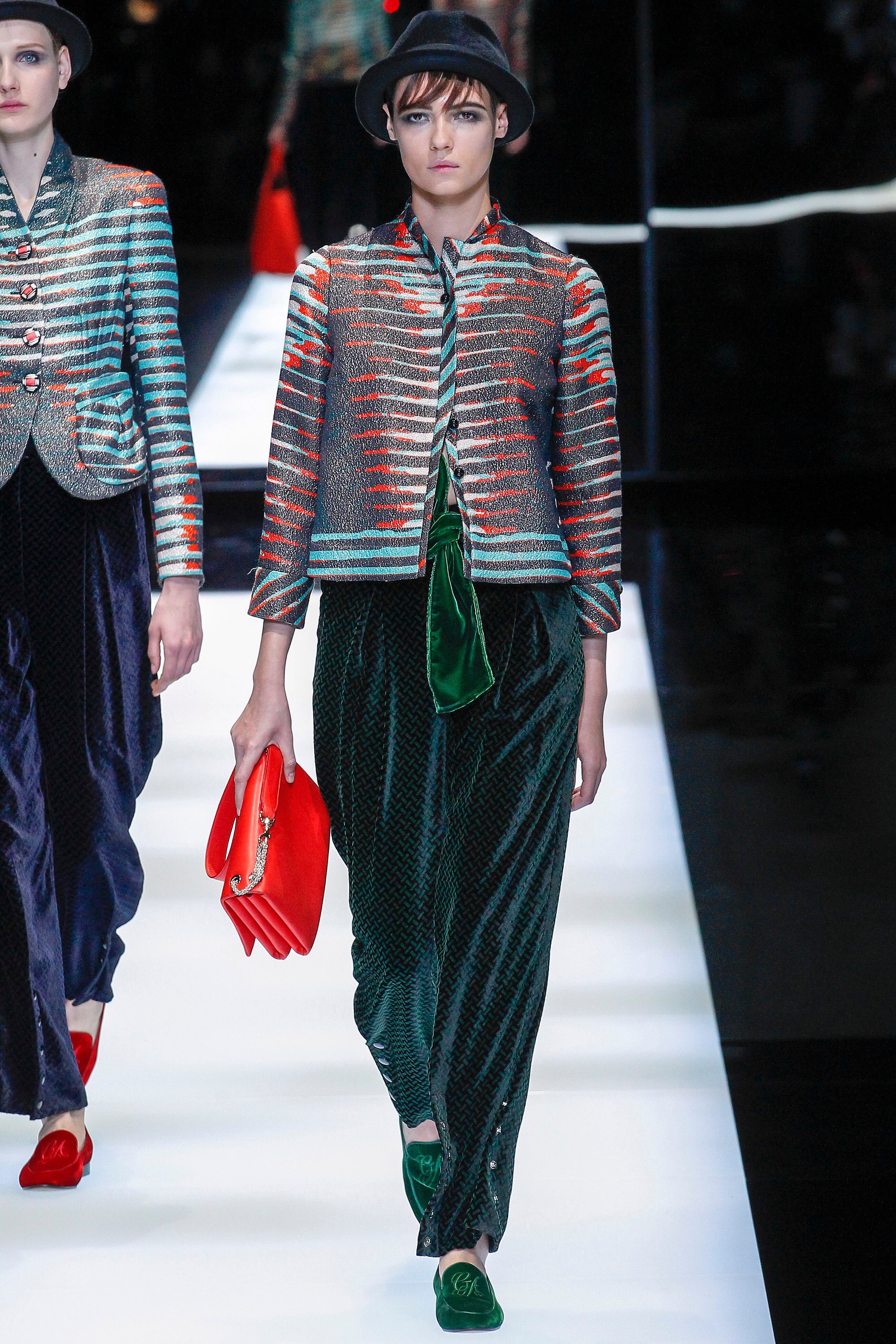 This jacket with a ruffled collar is a standout piece from the collection as well. Giorgio really likes this silhouette and uses it several times throughout the collection. 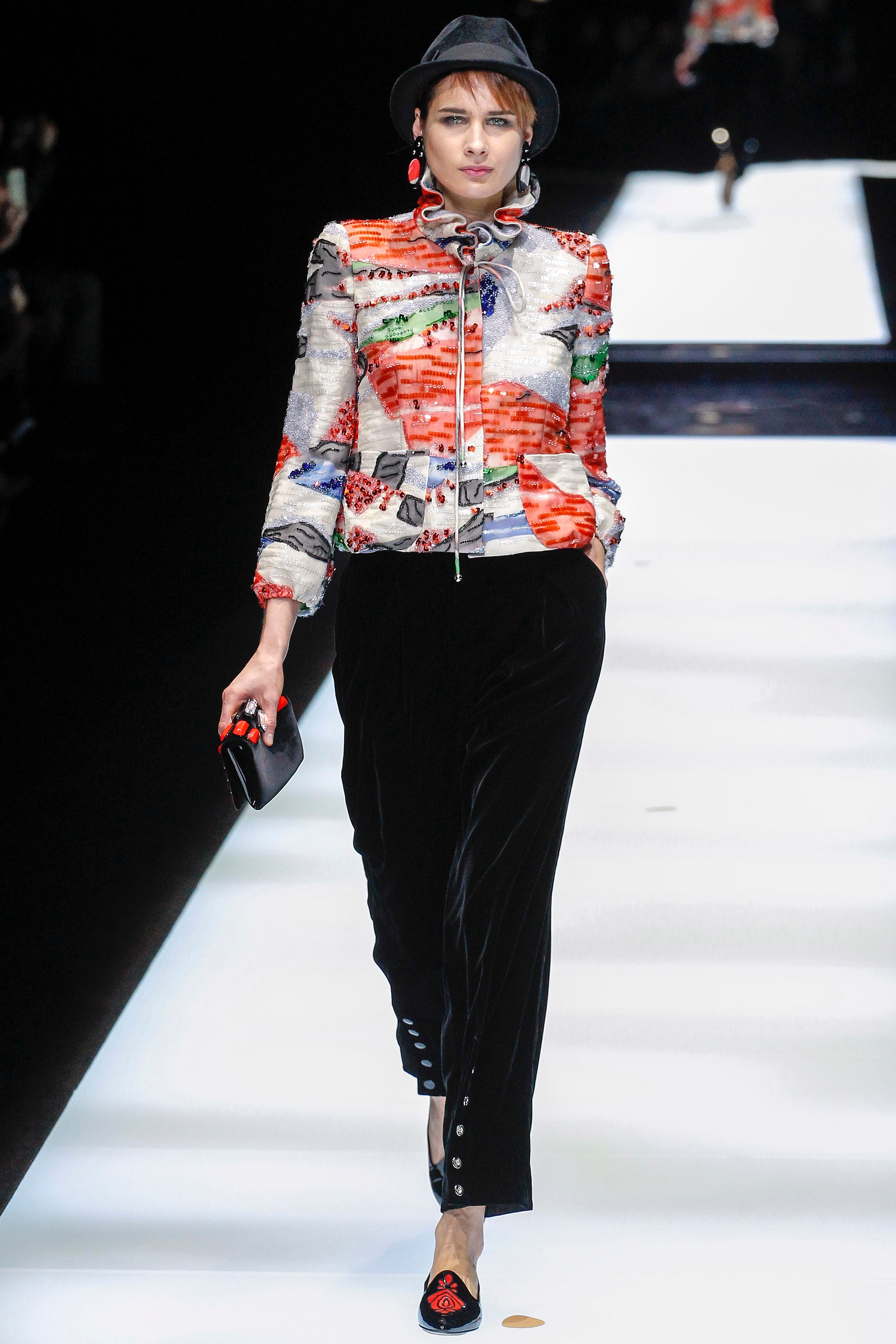 The most colorful piece, however, came at the very end. The rest of the models had cleared the runway, the lights went down, and came up highlighting this beautiful, sparkling gown.

In the end, there are some beautiful and colorful pieces throughout the collection, but the overall aesthetic is playing things safe this season as though waiting to see just how things develop before committing to anything too drastic one direction or another.

And that’s probably a fitting way to end Milan Fashion Week. Even with some notable bright spots along the way, most designers played it safe. The year is new and admittedly uncertain. We’ll hope that we see a lot more confidence here next season.