With a Visual Arts degree with an emphasis on wood sculpture from Ball State, and a love of music, it’s easy to see why Jay Lewis has a passion for making guitars. We chatted with Lewis to learn more about his business and his craft. 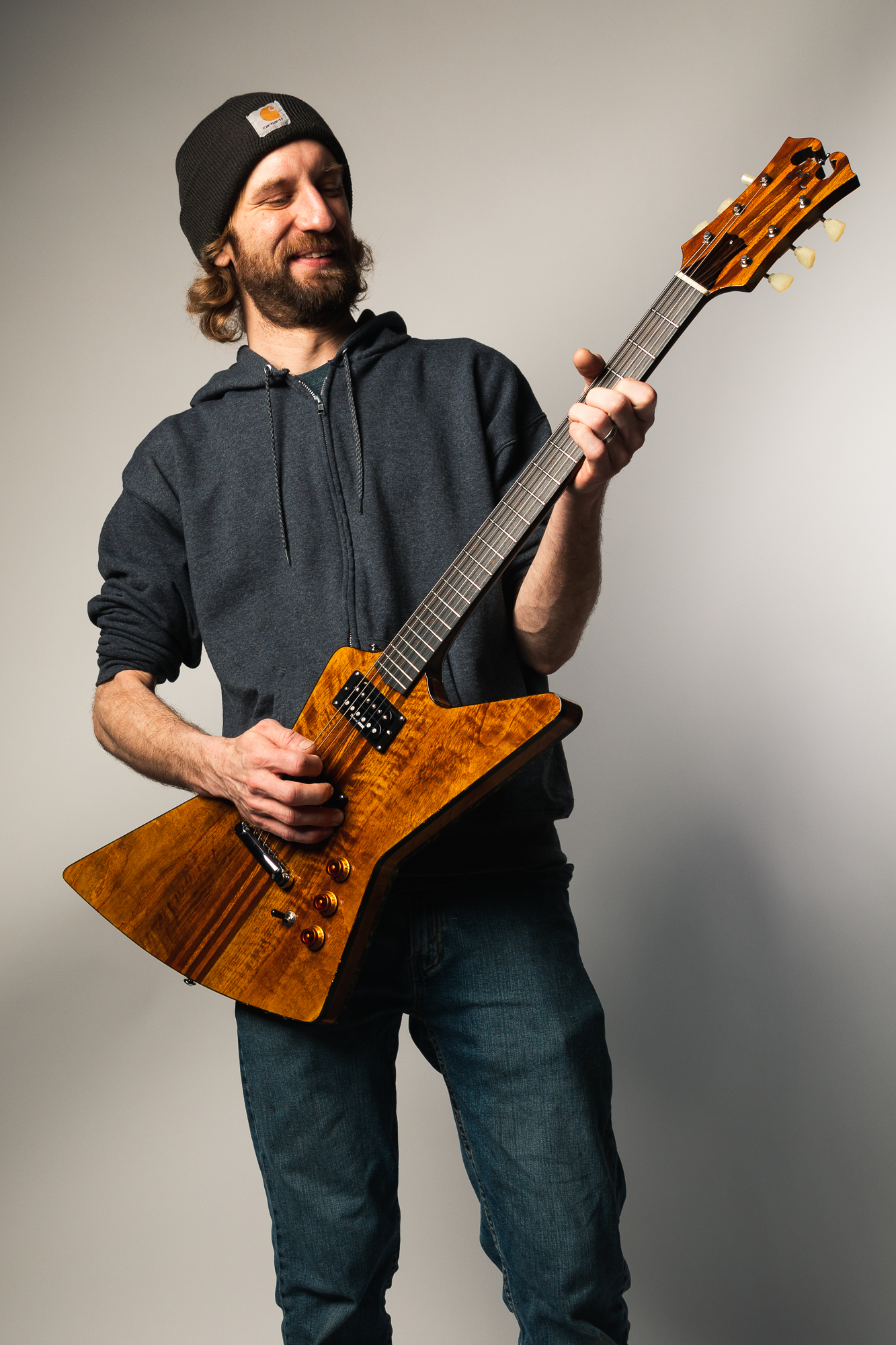 What do you make: Custom guitars, basses, and other stuff like ukuleles. There are a lot or instrument reviews on MusicCritic. We are hopeful that one day we can be on their list as that would greatly help us. In the meanwhile, we are doing the best we can to put out high-quality products.

How long have you been doing this: Well I made my first one in ’99, so a really long time, but not very often. Not very often until about 2009.

What piqued your initial interest in designing your product(s)?

I was a wood sculpture major in college and I played guitar, so I just kind of put those two together. And then people started getting interested in it. So I decided I should try to sell them.

What principles do you use when designing?

It really kind of starts out with the woods, trying to find a nice looking wood that I can use to of enhance the body shape essentially. Then using what the people want it to sound like, to kind of incorporate some of the elements of that into it. So that’s mostly electronics, scale length and things like that.

Who and/or what influences your design style? How would you describe your design aesthetics and values?

Old folk instruments, kind of classic instruments from the early 1900’s that a lot of my inspiration. I’m just sort of more of a traditional looking guitar but made for heavy music generally.

What comes first for you, the design materials or the design concept?

A design concept and then I’ll work around that. I’ll find the materials that’ll work best with it.

Could you describe the process of creating a piece – from conception to finish? The creative process as well as material selection and labor process, too?

We go through a whole list of what they want, everything down to woods and electronics, scale, length, what size strings they use, everything. And then I generally will come up with an idea and pass it by them. Some people are really picky, some people are like, just do what you want. And then go from there. Then I’ll just start gluing stuff up. I generally kind of keep people informed as it goes along, so I’ll get the outside shape made and everything and then carve the details into that.

How long does it take to make a guitar?

If you were to break it down by hours, it’s maybe two weeks on a guitar, but I’m doing so many at a time. It’s generally like about 20 weeks or so.

What is your favorite tool, and why?

I have a little hand rasp that gets used for everything, carving the shapes on the edges of guitars, cleaning up glue. It gets used on almost every step of the process. And I love it. It’s definitely my favorite thing to grab if I need something

Describe a piece you’ve created that you are most proud of. What was special about it?

I made a guitar for a guy named Anthony Resta who is a big time producer out in LA, he’s worked with like Elton John and Duran Duran. His is probably one of my favorite guitars that I’ve made, not only because it’s for him, but I just liked the design of it. It was a totally custom design and the woods are really neat.

Describe the commissioning process. What are the best and worst aspects about doing commissions?

The best part is that you get to know the people, which is pretty cool. You get to become friends with some interesting people that way. The worst part is probably when something is hard to describe or hard to explain to somebody. They don’t know what they’re going to get and I don’t know if they really are going to like what they’re going to get. That’s probably the hardest part. Most of the time it works out though. I’ve never had a real bad experience.  I tend to get a good idea of what the person’s going to want before I end up making the guitars.

What advice you would give to aspiring designers like yourself?

I would say just keep doing whatever it is that you feel like you’re good at or you want to do. Just keep doing it and eventually people will pay more attention.

What is one thing that the creative/design community can do in Indianapolis to help grow an audience for custom or hand-crafted work?

It’s hard to find a place to sell stuff.  I would say that there’s not really a lot of retail spaces that sell local, handmade stuff, trying to find a place for people to find your stuff without being on the internet. Especially guitars, people can’t play them. They can go to a store and play a Gibson or whatever guitar any day they want, but to play one of mine is kinda tough. You’d have to come over to my house and find me and get ahold of me, which can be awkward and whatever.

I already kind of made guitars for my favorite person, Steve from Torches is probably my favorite musician of all time. That was a huge thing for me and it was really early on, so that was great.

What makes your work different from anyone else’s?

Just the details. I think a lot of the shapes are pretty common shapes. But I do a lot of little details that are just for the person, carving on the back or their initials or whatever, things like that that really make it their own.

What’s your most rewarding memory in your business?

Steve again, I had emailed him early on. We had met years before because I was in a band. I just reached out to him and said, ‘Hey, I’m this guy from that band.’ A couple of days later I got an email back. I remember waking up in the morning to go to work and just  ran back into my room and woke my wife up and was like ‘Steve emailed me back!’ That was probably the biggest, coolest thing that happened.

Is there any maker you would recommend to be highlighted for this series?

Urban Hardwoods. He actually gets the wood and mills it and dries it and everything else and it’s always really beautiful stuff. But then he also makes furniture, so he does a lot of like tables and really cool stuff that he makes on his own. It’s all wood that would normally get chipped up and turned into mulch or whatever.

Tags from the story
custom, guitars, Indianapolis, JML guitars, maker of the month

0 replies on “Maker of the Month: JML Guitars”