When is a volume of poetry most like an album? When it’s Adrian Matejka’s Somebody Else Sold the World (Penguin Books, 2021), published this week.

In this slim, slow burning book by Indiana’s former poet laureate and current IU prof, almost every poem is a riff on the work of a fellow artist/music maker: Future, Radiohead, Al Green, Lana del Ray, or 19th-century avant garde pianist Erik Satie, to name a few. (He even credits his influences, poem by poem, at the end of the book).

Music puts Matejka in the mood. And reading his poems is like mainlining mood and attitude. Because these poems are products of the pandemic and racial reckonings of 2020, that mood is weary, suspicious and a little lonely.

Things like romance or nature that might be sublime, hoped-for escapes, often aren’t. There are “gerrymandered grocery lines,” the “residual cough of rabbits,” “that rip in her fishnet.” The poet reports, in slow-motion, on mental mudsucks, COVID isolation, and the tired tribulations of class and race warfare. 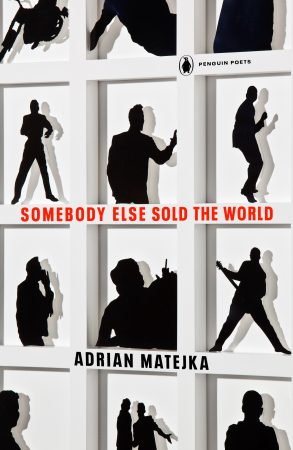 “I am risen like the blood pressure of anybody / Black mimeographed in the textbook / of this monochromatic year. That’s infant / mortality rate high. That’s high-top fade high,” he writes in the poem “Highest.”

Matejka wrestles and wrestles well. He drills down into the alloys of bullets (“Brass again, wishing to be a lost key…”) and their omnipresence (“A gun is always more / important than the people / in front of it”). “Gunpowder, like poetry, / was mistaken for an immortality / potion.”

He wrestles so hard that he wrings meaning from the same fertile frameworks. The book contains eight poems with the same title as the book itself, but all with different content. It’s Matejka reinterpreting his own ideas for us, in real time; a trumpet player, running new cuts of the same solo.

Another recurrence throughout the collection is “the antagonists.” They show up in various poems to “…acquit their own / nondescript hearts…” and to “imagine new ways to dismantle / poor people…”

By the time the book’s arc falls, the poet is ready to take refuge in the faintly guilty surge of love and desire in the time of “plywood isolation” we all remember so well. From the poem “Darling”: “Yes: it’s blunt / as sea salt in the sweet / blush where we still / end up undressed / & unrushed no matter / how many sirens holler / at us from out there.”

Somebody Else Sold the World is a book of time- and place-bound poems that often reads like local news. A parking lot in the Eli Lilly campus shows up, as COVID shots are doled out. Beech Grove appears. So does the ghost of Dreasjon Reed. “Then Dreasjon was dying as his phone pointed / upward: the yowling sirens & the cops / chin-first chatter, his last blue canopy of May” (from the poem “Later Isn’t a Time”).

You feel grateful to Matejka for using his laser-wrought wordcraft to name the loud and quiet forms of pain endured in 2020. And while Somebody Else Sold the World is never a casual read, it is bingeable, and able to be played in one sitting, swallowed whole, with one caveat: chew thoroughly.

Or, buy the book for $20 or less at your favorite book outlet.

Adrian Matejka’s other collections of poetry are Map to the Stars (2017); The Big Smoke (2013), a finalist for both the National Book Award and Pulitzer Prize; and Mixology (2009), selected for the National Poetry Series. He lives in Indianapolis.