Put yourself in Richard Malone’s shoes for a moment. Imagine that you’re hosting your first full walking fashion show in London. People are already comparing you to the likes of JW Anderson and Simone Rocha—primarily because, like them, you’re Irish and the Brits are paying a lot of attention to what you do. Everyone is in place. The show begins right on schedule, the official kickoff for London Fashion Week. Everything’s great as you send your new collection down the runway. The show ends with cheers and congratulations.

But as you return from taking your bow, enjoying the rush of emotion that naturally comes with such an event, you notice the presence of police officers who weren’t there a moment ago. Their faces are serious. They are watching everything and everyone with an uncomfortable intensity. That feeling in your gut tells you that something is wrong.

The news takes a moment to filter through, but one soon finds out that there has been another terrorist attack in London, this time on the underground train at Parsons Green Station. No one directly connected with London Fashion Week was hurt. Amazingly enough, the device did not operate as intended and only set off a fireball instead of exploding. While there are several injured, there are no apparent deaths. Things could have been a lot worse had the bomb actually gone off. Still, it is quite bad enough that on the morning of Richard Malone’s first fashion show London suffers its fifth terrorist incident this year. The last time London saw such a high level of terror was back in the 70s, when the Irish Republican Army was actively bombing the city.

This was not the kind of start that anyone had wanted. Security around the British Fashion Council’s showplace was immediately increased. It was already heavier than last season, with all bags being checked and strong limitations as to what can be brought into a venue. Traffic in the city, which is rarely what anyone would consider an easy drive on a Friday, became almost impossible to navigate as police searched the city for the person responsible for the attack. As a result, it would be late afternoon before pictures were available from this morning’s show.

London fashion already has enough to worry about without incidents like this. With Brexit talks ebbing and flowing and rumors swirling in every direction, designers are largely uncertain as to how easily they’ll be able to ship product in and out of Britain once the separation from the European Union takes place. Very few designers are able to source their materials from anywhere around the British Isles. Many of the people working in the fashion houses are immigrants from other European nations whose ability to stay may be in jeopardy. Fashion retail has been rocky on its own the past three years and forecasts for the post-Brexit economy are putting pressure on designers to increase profit now while doing so is still possible. For young designers like Malone, the future looks a bit frightening.

Yet, this young designer tapped into the one place he knew best growing up, the pub, and from there found inspiration for what has turned out to be one of the most exciting collections of this short, hurried, and anxious fashion week. Embracing a strong sense of blue, Malone delivered some exciting fresh designs that include barbershop stripes and asymmetrical bras. Hems ran the full range from long to short, and then there were shorts shorter than the short skirts. Unmissable in the mix were the cut-out jersey striped sock boots from a new footwear company, Roker. You’ll want to remember that name in addition to Malone’s. Here, take a look: 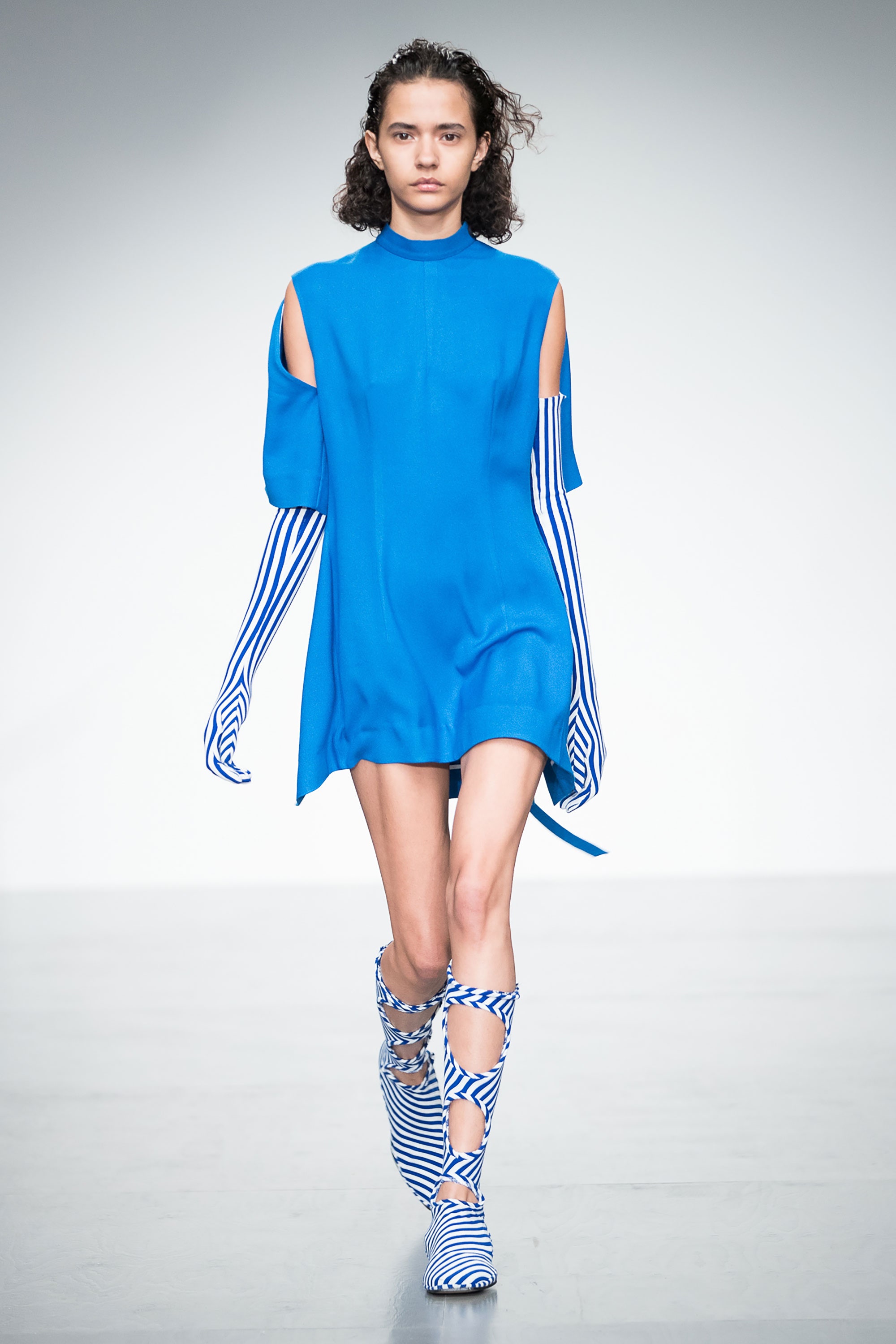 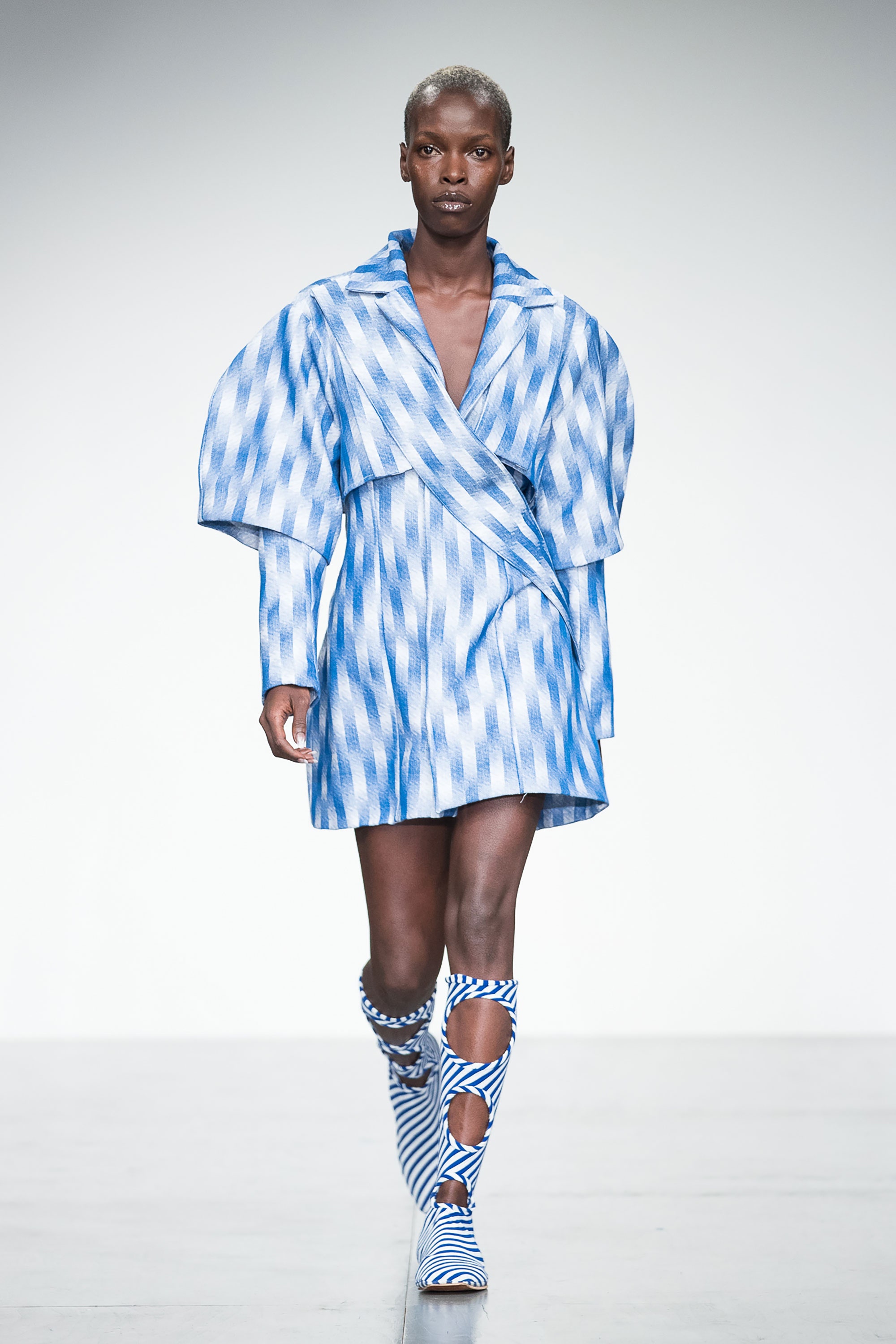 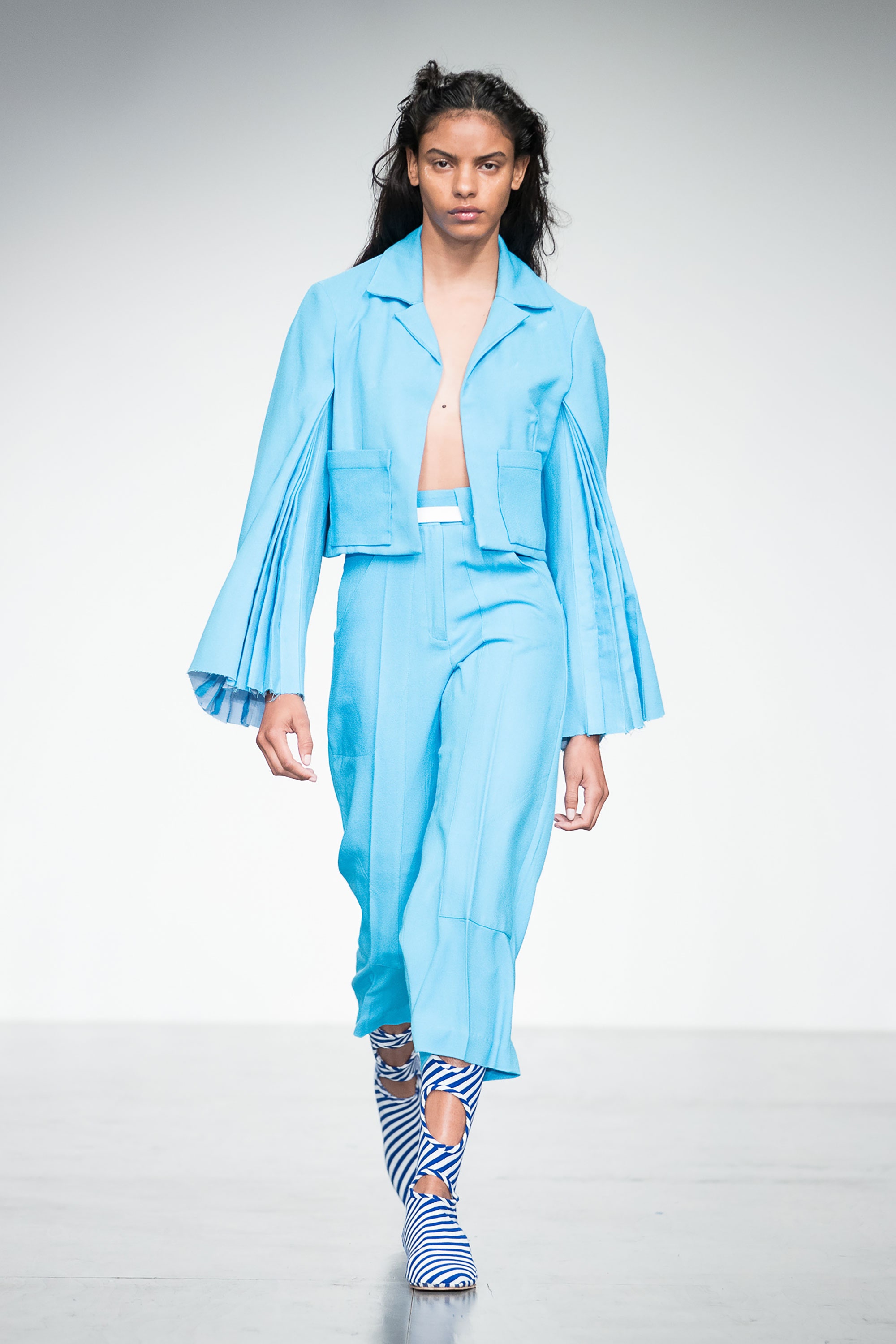 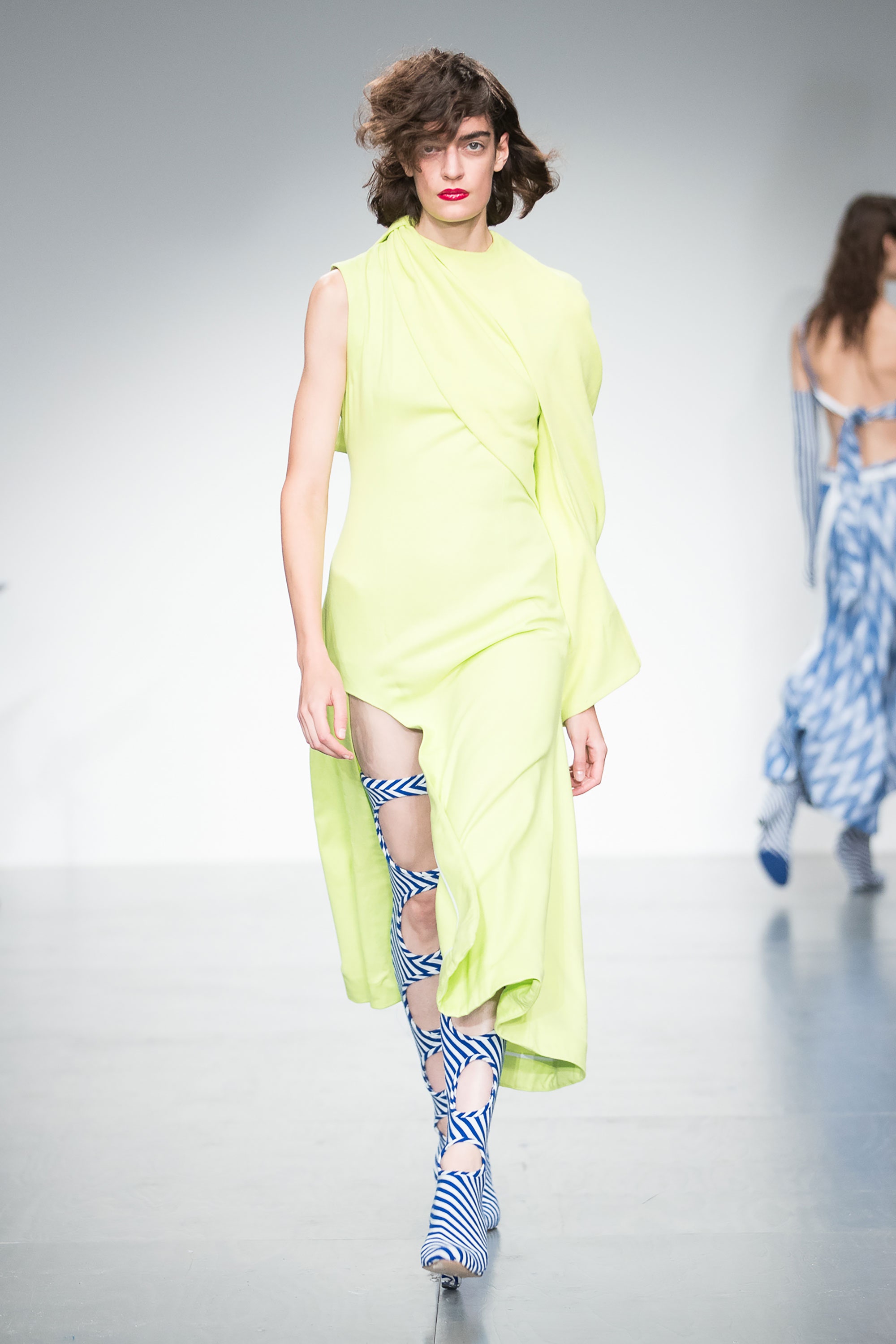 There’s going to be a lot said this week about responsible fabric sourcing. Prior to this morning’s terrorist incident, there were protestors outside the British Fashion Council arguing for fewer animal-based materials in favor of ethically sourced materials. Those protestors might be glad to know that Malone sources his fabrics through a collective of women weavers in Tamil Nadu, in the south of India. Their process minimizes the use of water and energy in the creation of natural dyes. Not only is Richard Malone a promising designer, he’s also eco-friendly.

All of the designers showing today were forced to deal with the distraction of this morning’s event. Some models have been visibly frightened and some guests have been running later than usual from fear of riding the trains. No one in London wanted this Fashion Week to start under such a horrible and unnecessary event. We are still having problems getting pictures back from some of this morning’s shows and hope that improves as we progress.

Richard Malone, however, managed to still start London Fashion Week with something about which everyone is likely to be excited. He’s been the one bright spot in an otherwise questionable day of design. I look forward to seeing what the future holds.