One of the things the British Fashion Council does a bit better than the other major fashion capitals is highlighting new and upcoming talent. This season, they chose to toss most of them up to the front of the schedule, making it easy to compare their sameness and note their youthfulness. It’s not that the young designers aren’t creative, but in their creations, one still sees the naivety and lack of experience of a more mature designer. To juxtapose those young designers, some of whom are barely a year out of design school, the fashion council gives us some of London’s more eccentric designers, such as Matty Bovan, to show how even those well out of the mainstream still mature and develop their craft.

Bovan fits into that collection of punk designers led by Vivienne Westwood. In fact, Bovan’s designs and “craftiness” are often compared to Westwood’s. The biggest difference between the two is that Bovan has yet to take up environmental activism as a cause. That doesn’t mean he isn’t projecting a public conscience, though. In fact, his may be the best example of British frustration with the whole Brexit deal. In all the odd styling, he makes distinct references to witchcraft. Clarifying the comparison, Bovan said, “It wasn’t a direct reference, I didn’t want to do witches’ cloaks and hats. It’s been in my head, the scapegoating of people that goes on at the minute. The way some people have no way of pleading their case—and that’s it.”

Looking at this collection through those eyes, appreciating the frustration and distrust that many Britons are feeling with their government, helps one make a little more sense of the styling. There’s a lot going on here and, much like the never-ending litany of Brexit talks, there are times when none of it makes a lick of sense, and that is totally intentional. Bovan empties the wheelbarrow with several looks, giving us everything from gigantic bows to carpet-looking fabric squares, ruffles and peplum of a size that enforces the concept of personal space, shirts split with paisley on one side and fish prints on the other, and a knit that includes an enlargement of his own face. In fact, the prints on several of the pieces bordered on the surreal, which is a term I’m hearing often in reference to the country’s departure from the EU.

If it sounds as though this collection is chaotic at times, it is, and if Bovan is intent on reflecting the mood of Britain at the moment he has little choice but to push the level of bizarre as far as he possibly can. There is nothing “normal” about what’s going on in the UK at the moment and the designer demonstrates how connected he is with common Britons with the carefully tailored absurdities of this collection. Here are a few samples from the runway. 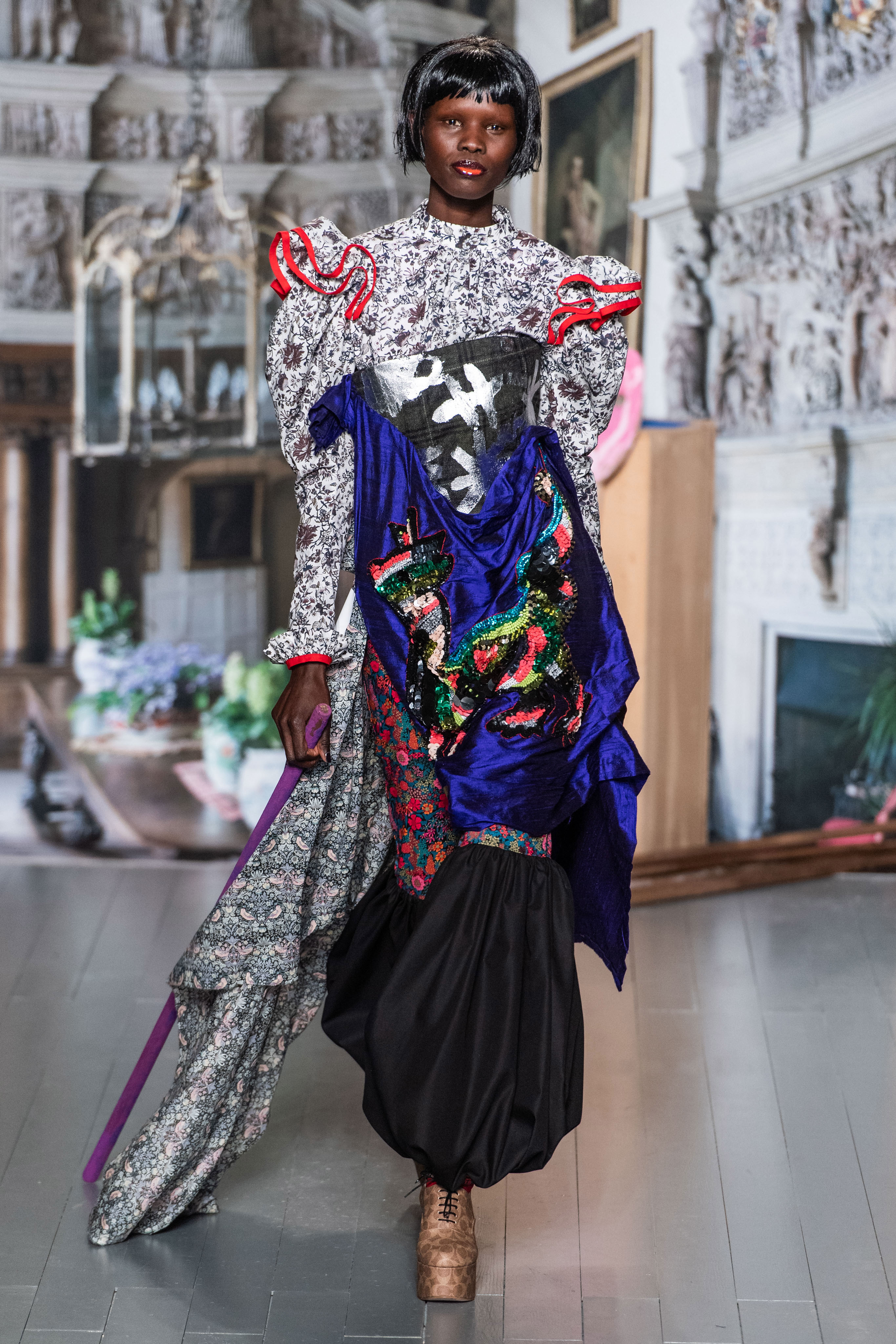 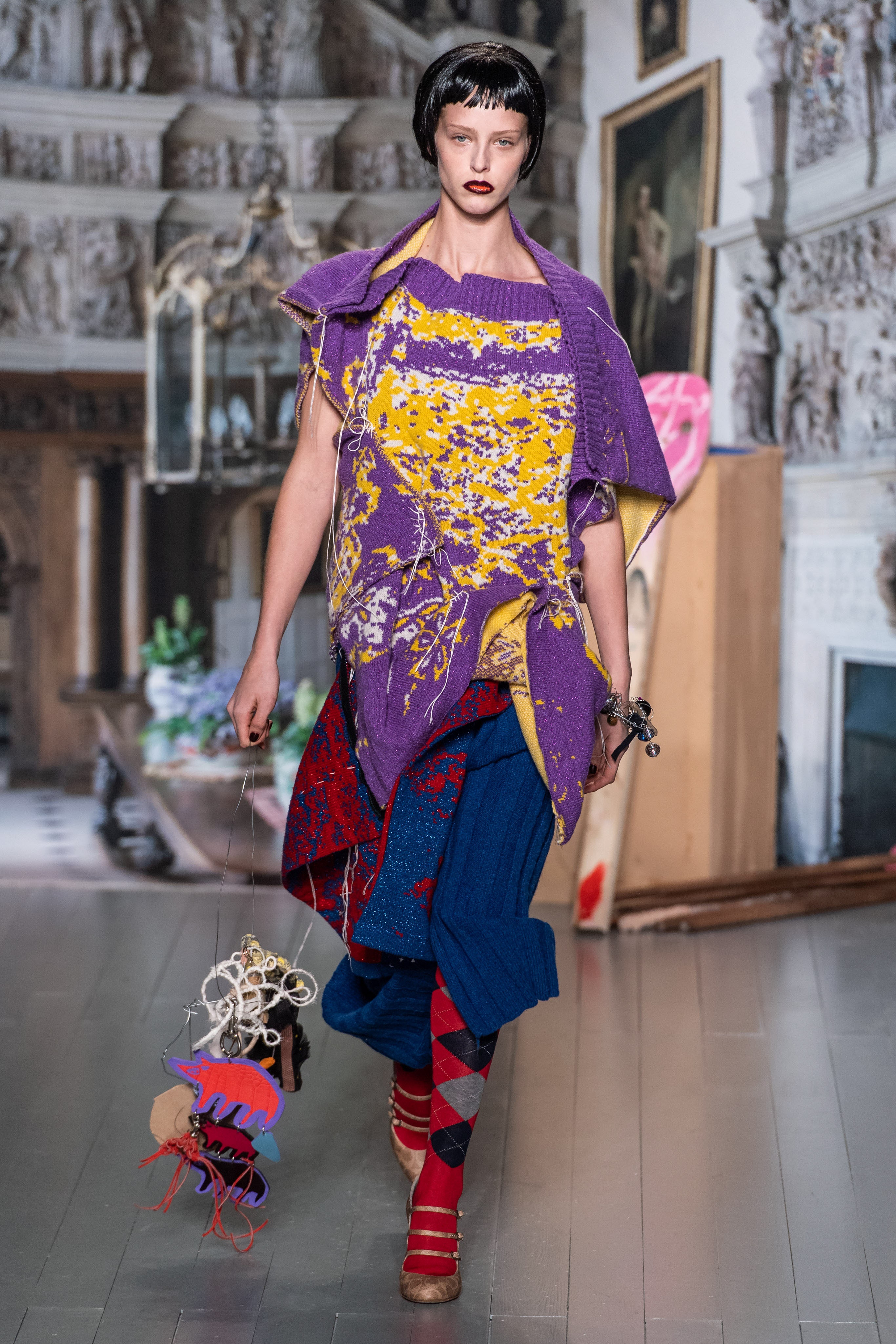 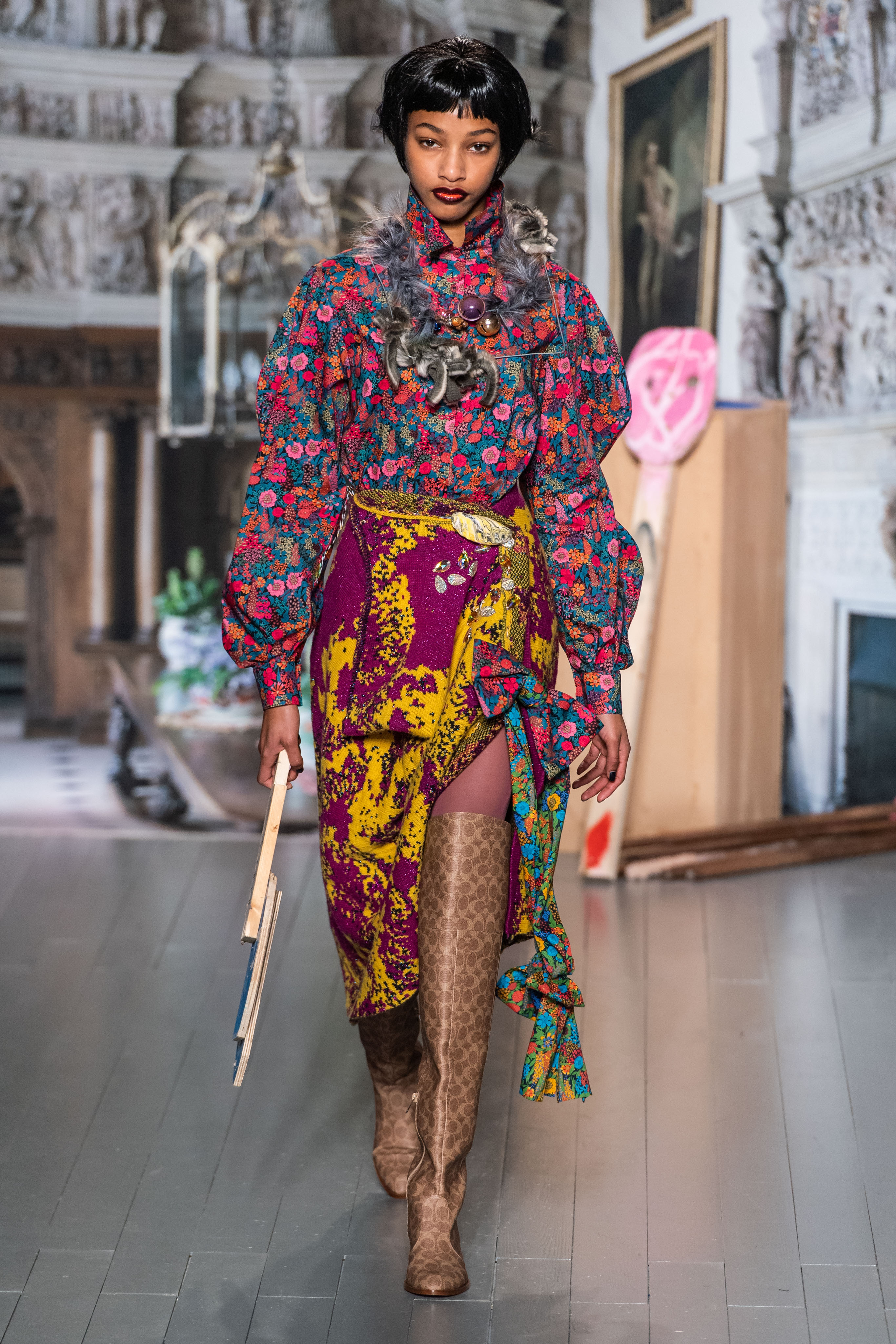 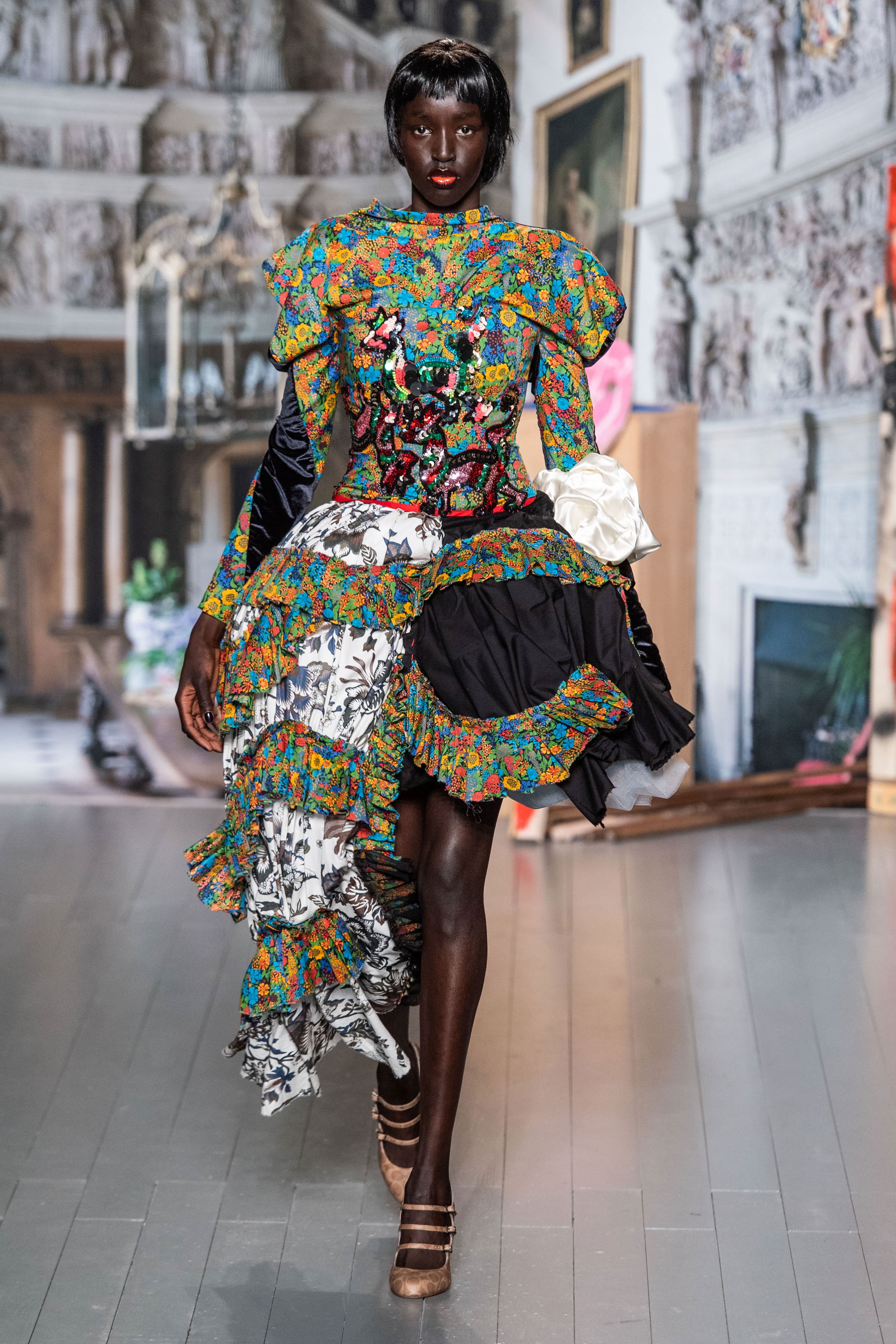 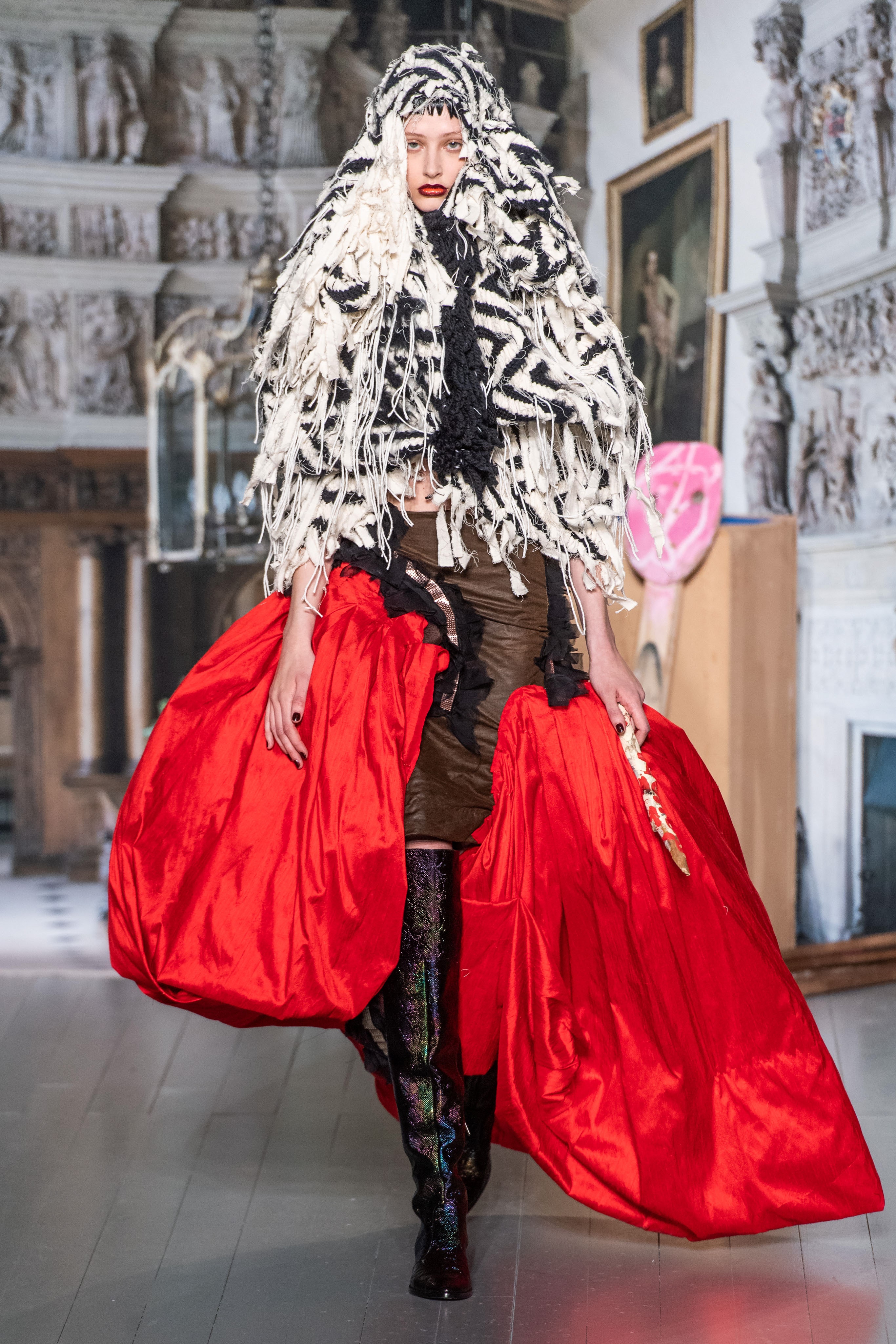 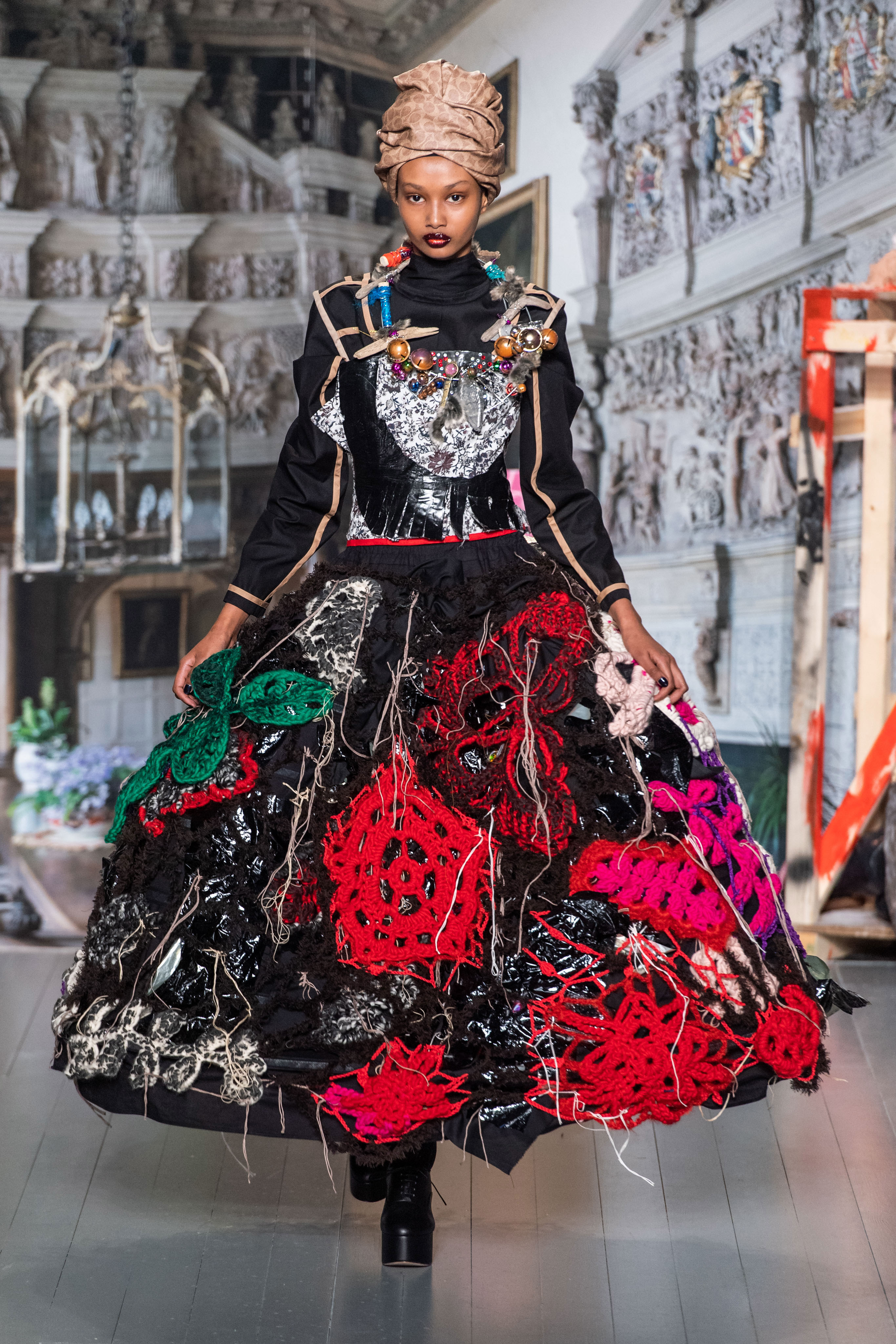 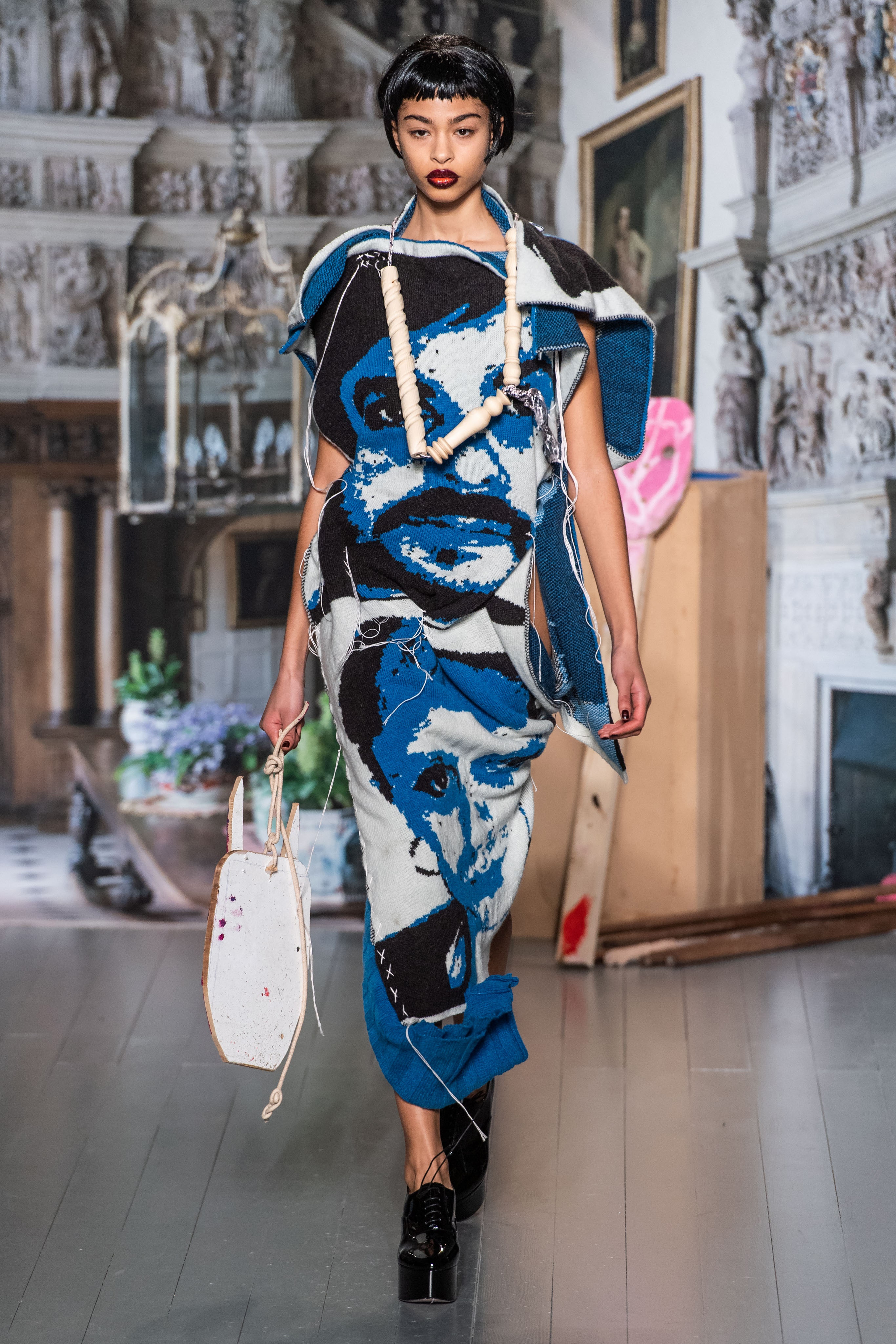 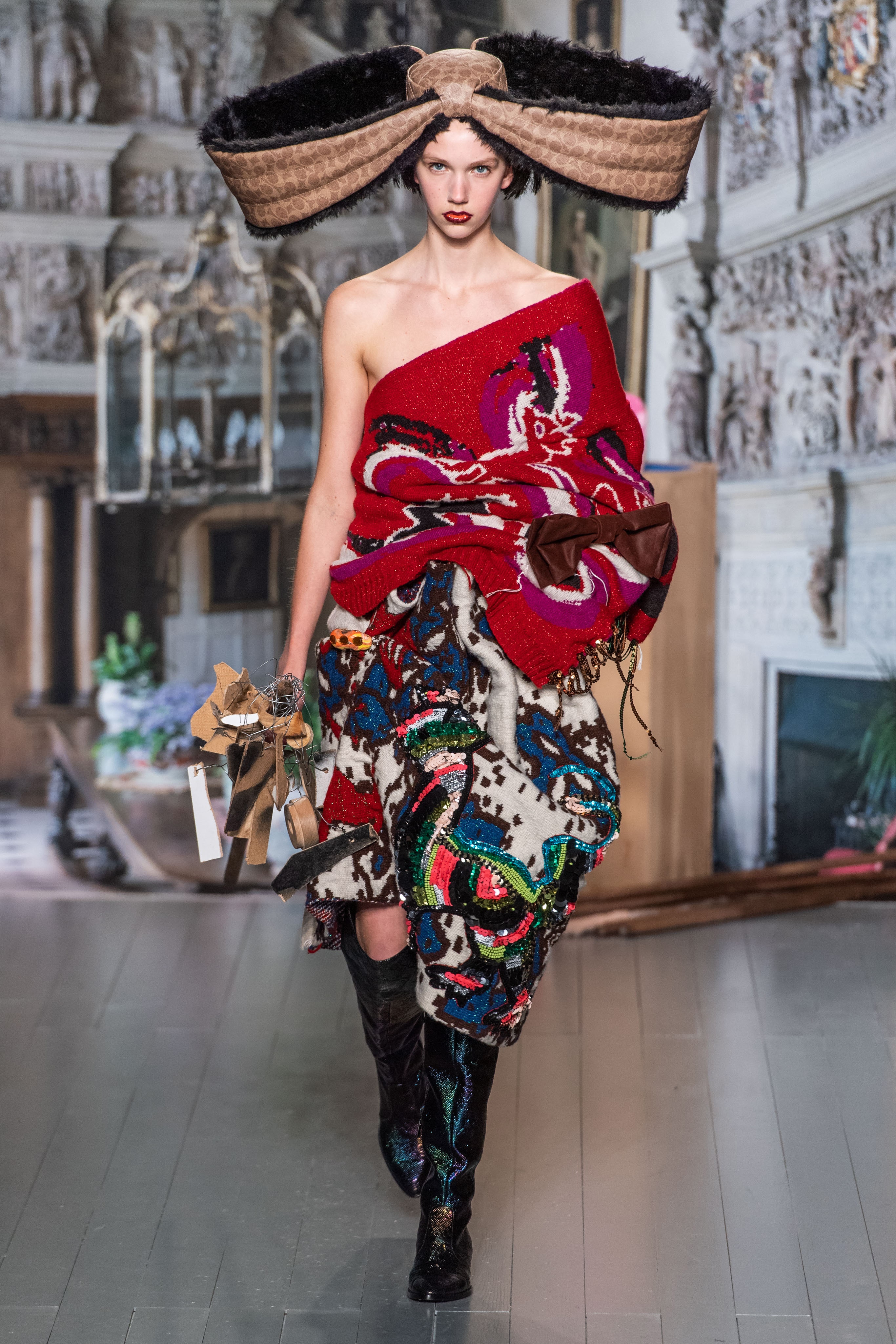 Bovan did have a bit of help with the details in this collection. If one couldn’t tell by looking, the hats are from Stephen Jones, whose work is already quite popular this season. All the little accessories such as keychains, bows, scrunchies, etc. are the work of Katie Hillier, who perfectly captured the mood of the collection in ways that provide the perfect finishing touch.

Work like this is what makes British fashion unique. Bovan has the ability to tap into the emotion of the entire country and creates a special kind of cohesion without everything looking the same or playing off any kind of stereotype. Bovan isn’t all that far removed from school himself but already shows how much difference a few years of experience makes in the quality and direction of one’s design. Hopefully, the rookies are paying attention.