I had the chance to chat with Oreo Jones, local musician and organizer of Chreece, an all day hip-hop music festival in Fountain Square. Chreece and Victory MFG partnered up with us for their shirt launch on Sunday, June 28 at Pattern Store. Stop by from 3 to 8 p.m. to see what all the fuss is about!

Why hip-hop? What inspired you to organize Chreece?

Oreo Jones: I’m a rapper here in the city first and foremost. Since I’ve started playing shows and being active in the scene, I felt there was this weird cultural barrier blocking out the hip hop community from the rest of the city. That being said, I feel like it has evolved so much and I believe the artists here have slowly started to form this sort of camaraderie or a bond with each other. I woke up one day and I thought that it was time for Indianapolis to have its own all day, hip hop festival to bridge the gap between all the different lanes of hip hop in the city.

How did you decide which rappers/DJs/producers would perform?

OJ: I’ve been playing shows around the state for around five years now. I feel like I can comfortably say I kind of have a grasp on what emcees are doing around here. It was super hard because if you think about it, there are definitely more rappers now in 2015 than ever. We’ve been meeting since early spring with a committee of people that have been actively engaged in the city to decide who should perform. Hustle, style and creativity have all been factors.

Why the name “Chreece”? I read about cheers + peace, but could you explain a little more?

OJ: I was pretty drunk during a taping of my cooking show. The guest was Abby Merris from Bluebeard and as we were going to cheers a beer on camera I slurred cheers and peace together to from CHREECE. It’s kind of an inside joke among the crew that has morphed into a word. Plus it sounds better than “Naptown Rap Fest” or “Turn Up Convention” or “Fountain Square Hip Hop Day.”

Tell us the details of the event.

OJ: Okay, so Chreece is a hip hop festival benefit for Musical Family Tree, a 501(c)3 nonprofit archive and community with the mission of spreading Indiana music. It will be held in Fountain Square on August 29th, 2015 starting at 2 p.m. There are six venues that will be open throughout the day and evening. Pizza King, Debbie’s Palace of Noise and Laundry (house venue), HI-FI, The White Rabbit, General Public Collective, and the Plaza at the fountain. There will be a complete schedule of all times and sets posted at Do317 along with a physical map. Everything is staggered in the performance times so you should be able to see all 40+ acts if you plan your day right. Go to chreece.com and get your tickets at chreece.eventbrite.com.

What are you looking forward to with Chreece?

OJ: I’m looking forward to all the artists meeting, and, more so, the city recognizing that hip-hop in the city is as much as cultural importance as any other form of art here. I’m hoping people also hear something that they’ve never heard before, and I hope that they understand that we can compete with anyone on a national level.

What do you hope to accomplish by putting on a hip-hop music festival?

OJ: I hope to bring the community together and raise awareness for all the dope shit that’s happening here. But in all actuality, I really want to help raise some funds for Musical Family Tree just because they do so much for the music scene here in the city. They are a new non-for-profit and they deserve any penny they can get.

Who are you partnering with on this event? 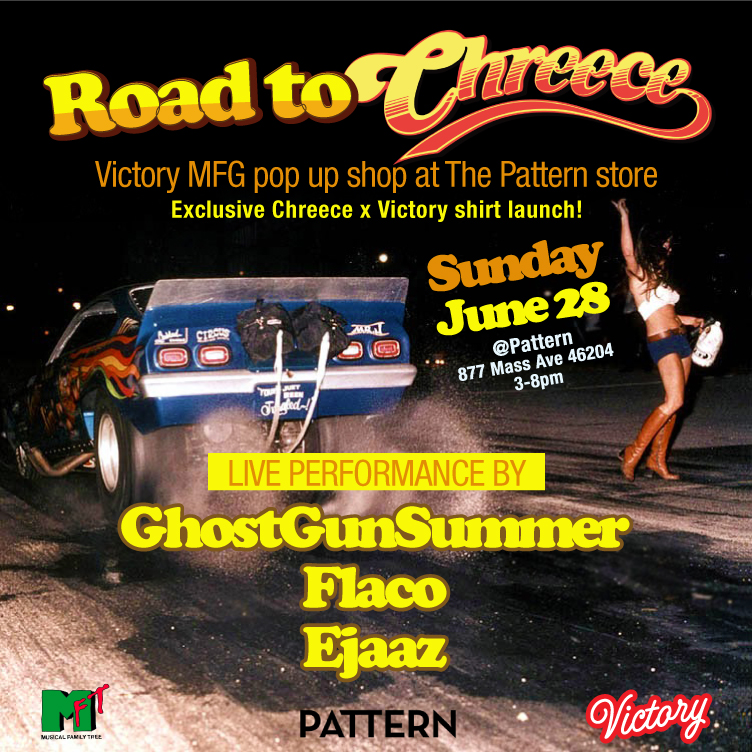 Written By
Lanie Yorgen
More from Lanie Yorgen
We sat down with Indyhub’s executive director, Molly Chavers to tell us...
Read More